If there’s 1 thing I’ve come to learn, it’s that Tom Ford never fails to put sexy into beauty.  The latest Soleil Collection for Summer 2017 comprises of a small but tightly curated color makeup designed to make traveling so much easier, and a Blanc Bath & Body line to make it seem like you’ve spent all day stretching out and soaking up the sun. 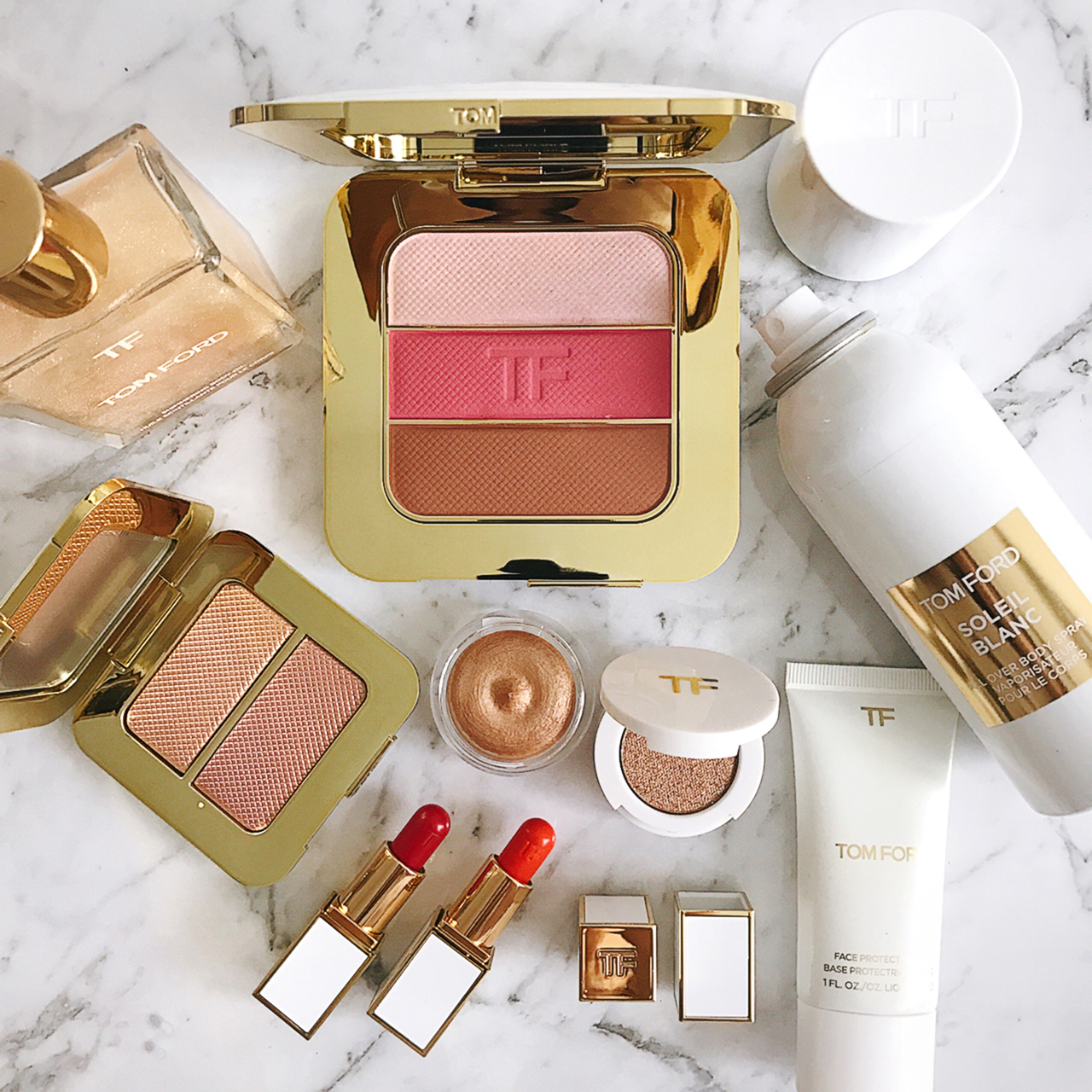 Tom Ford’s latest Soleil Collection returns with many of the product formats that we had seen last year, but with new color variations.  These will replace last summer’s offerings, and be available for the entire year ahead.  The one thing is a completely new, is the cute Clutch-Sized Lip Balm. 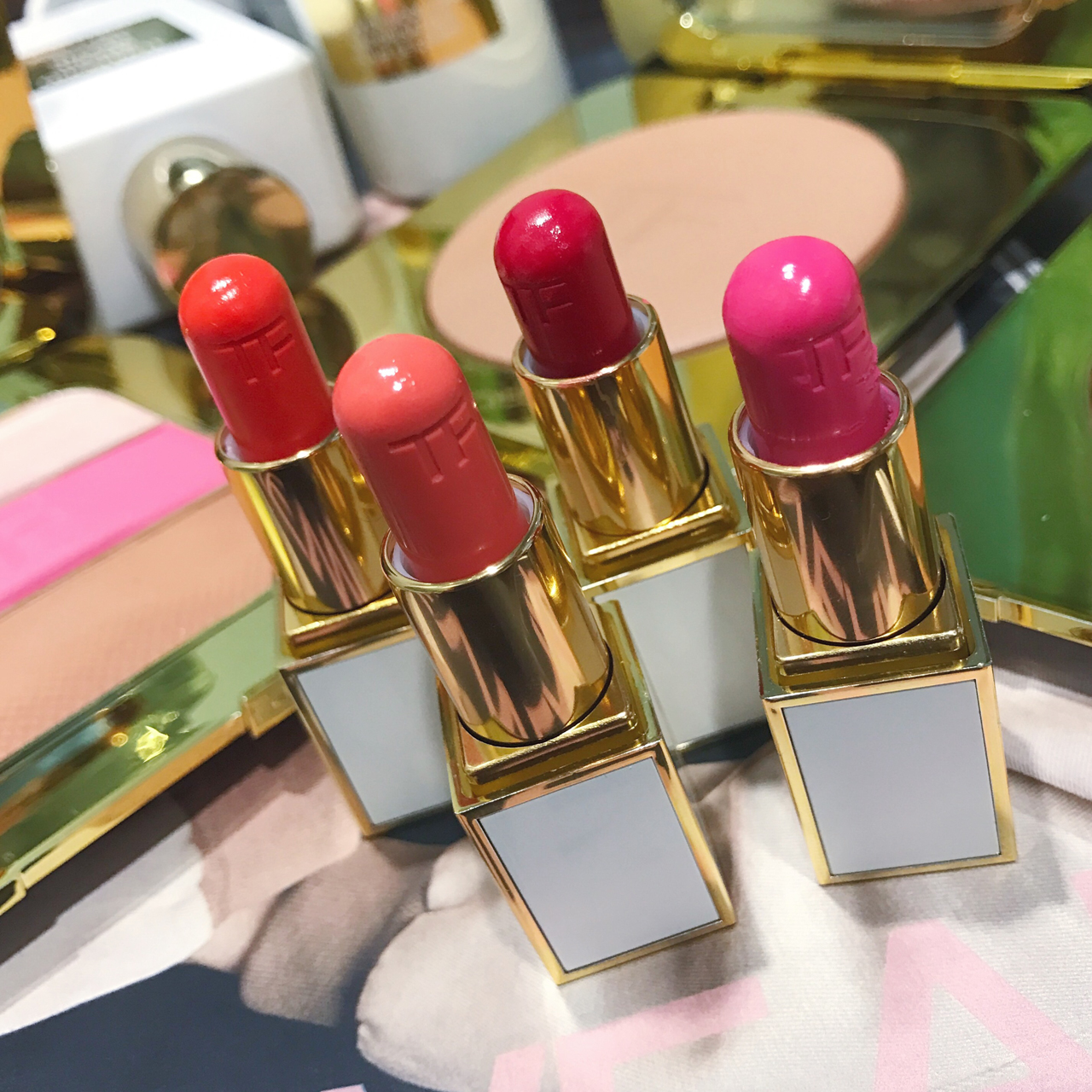 These 4 miniature lip offerings are the same size as the Tom Ford Lips & Boys, but in the Soleil white-gold casings.  Housed within is a completely new tinted lip balm that not only pampers the lips with moisture, they also pack a good dose of color for a jelly-like juicy pout. The small rounded-dome bullets are really cute and glide over the lips easily without much fear of smudging out of the lip lines.

As can be expected with lip balms, these are definitely sheer, though Neotropic and Fathom boast more color than L’Odisea and Cruising.  I like that they don’t start to dry out after a couple of hours the way some tinted balms do on my lips, and at the same time, they don’t make my lips feel slick and slippery.  For a lip balm, these actually have fairly impressive lasting power, although they go away with eating, they do leave a pretty light stain behind. 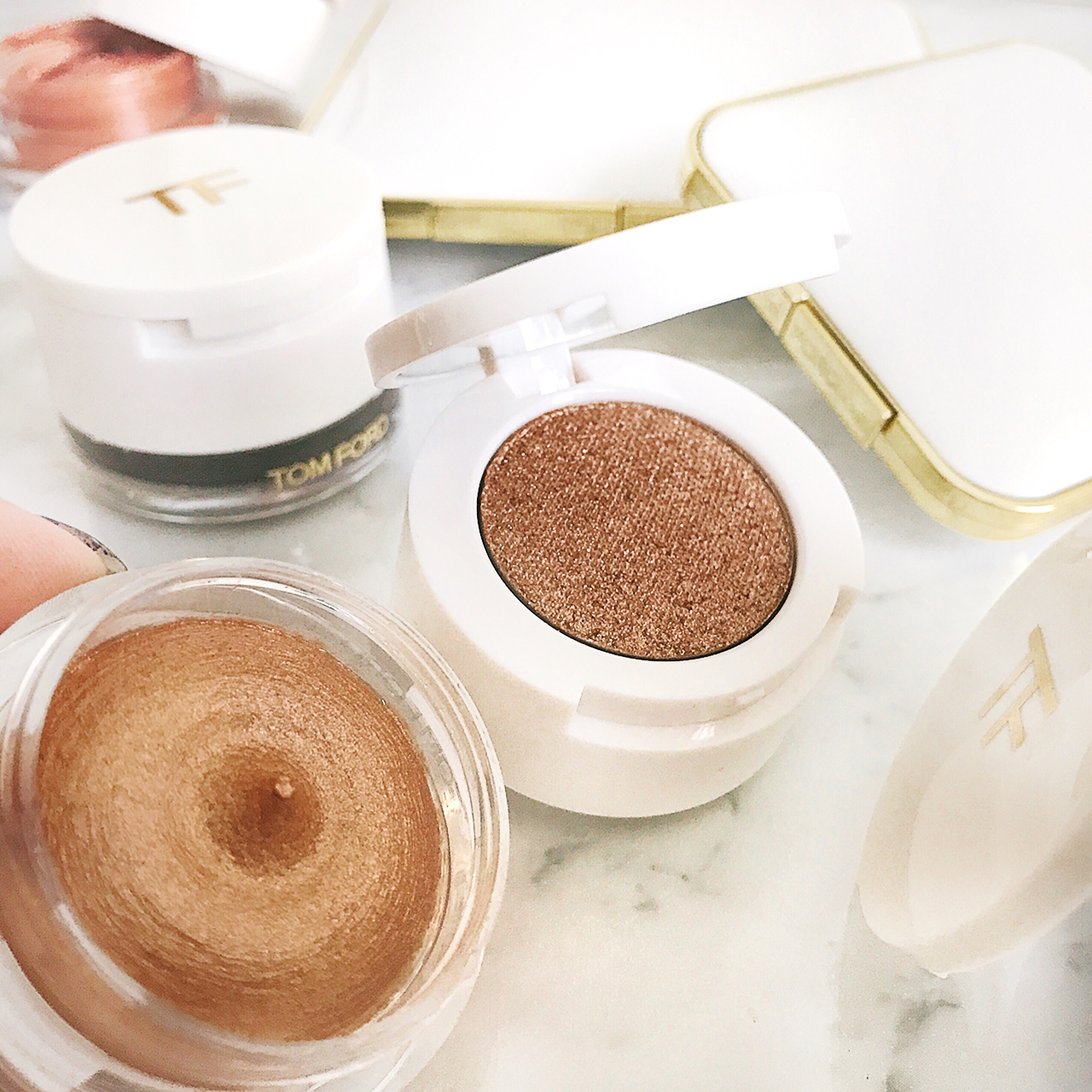 Returning this season is the double-deckered Cream & Powder Eye Shadow Duo.  There are 2 repromotes – Golden Peach and Naked Bronze [swatched here].  In addition, there are 2 new shades this season – Sun Worship and Young Adonis.

For some reason Sun Worship showed up much more bronze in the picture above, but it swatches out to be a cool gold.  The top layer of powdered eyeshadow is a gold glitter with a translucent base and is a great topper.  The cream eyeshadow in the jar below is a dense gold shade with highly reflective metallic finish.  The combination of the two gives greater opacity and even more shine, but does not change in terms of color. 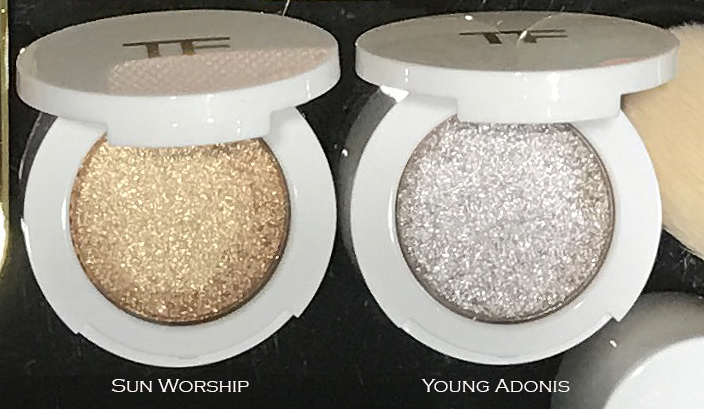 The top layer of Young Adonis is a muted pale bronze with some champagne gold glitters, and is quite sheer.  In contrast, the lower level cream shade is a medium-light bronze that has more red tones than the powdered shadow.  It also has a metallic finish though not as reflective as Sun Worship.  The combination of the two results in a shade that reminds me of Platinum from Holiday 2014 [reviewed here]. 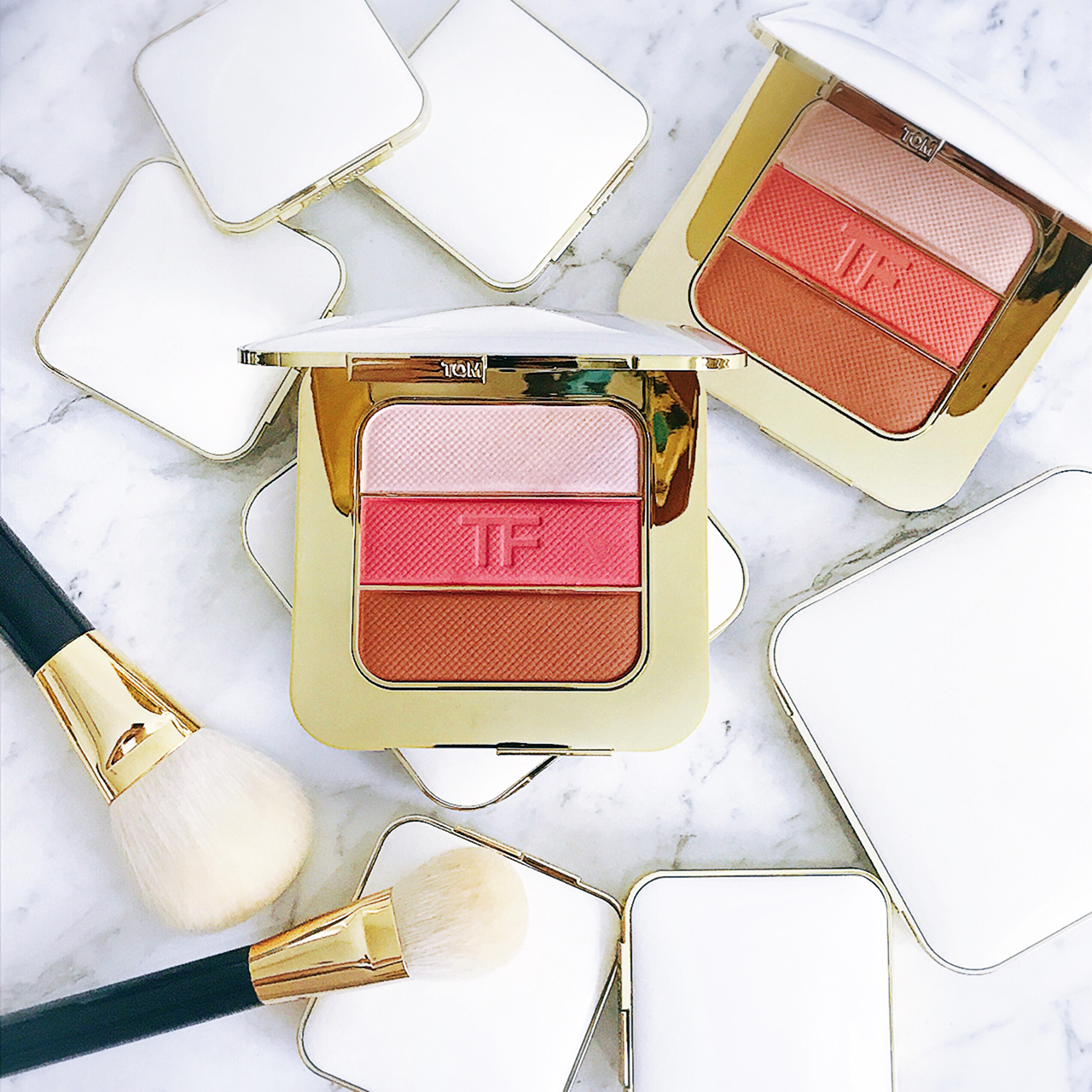 The big palette in the collection is a new color variation of the Soleil Contouring Compact – Soleil Afterglow.  This is a highlighter/blush/bronzer housed in a square-shaped palette.  Compared to last year’s Afternooner, this Soleil Afterglow is noticeably cooler and much pinker in tone.

On the other hand, I found Soleil Afterglow to be even more pigmented than Afternooner, and I would recommend a very light hand with both the blusher and bronzer, and blend blend blend! 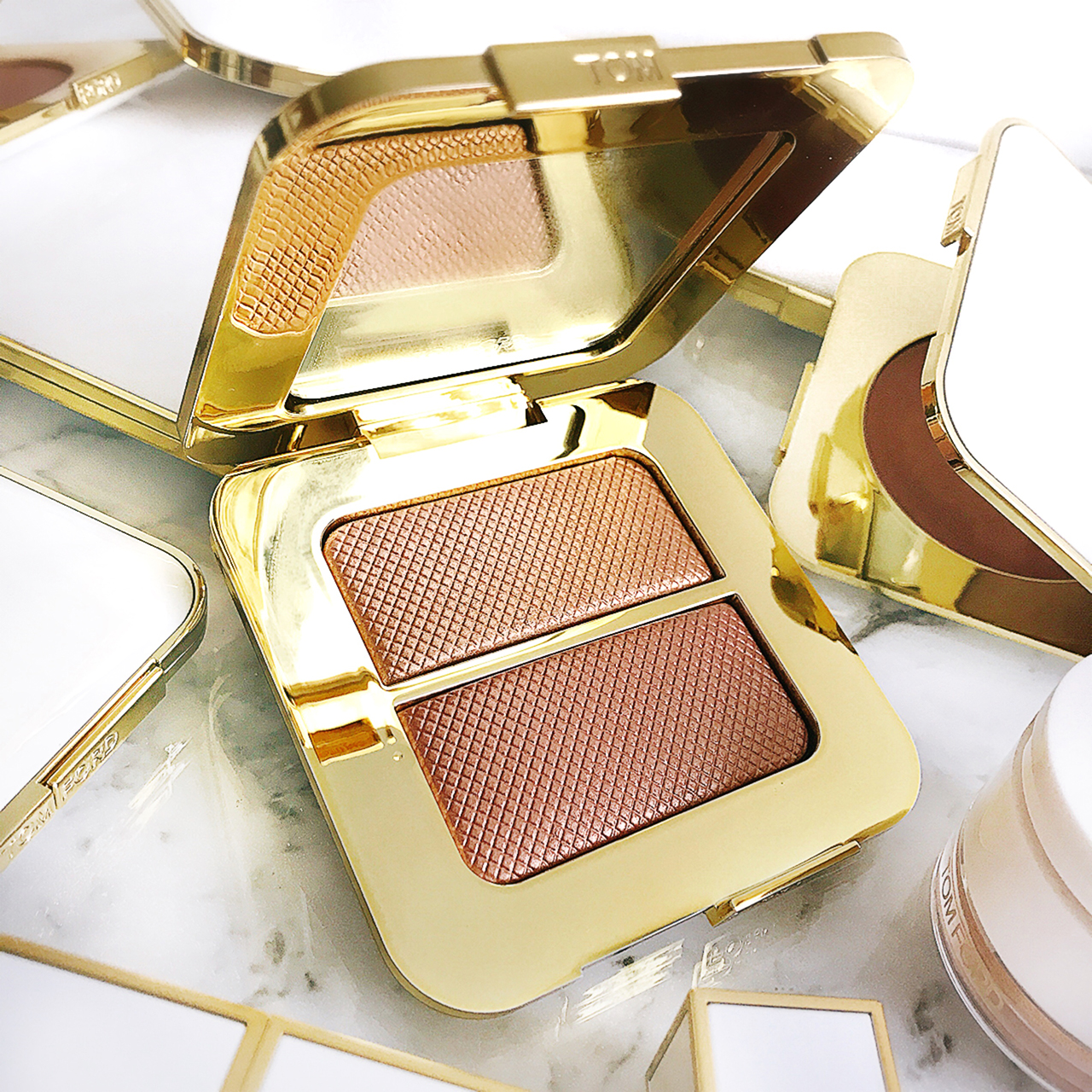 For those who prefer something more compact, the Sheer Cheek Duo returns this year with a new color variation – Paradise Lust, and a new Sheer Highlighting Duo – Reflects Gilt (shown above).  The formula is the same as last year’s Bicoastal [reviewed here], which is a designed to be used both wet and dry, and leaves a luminous finish. 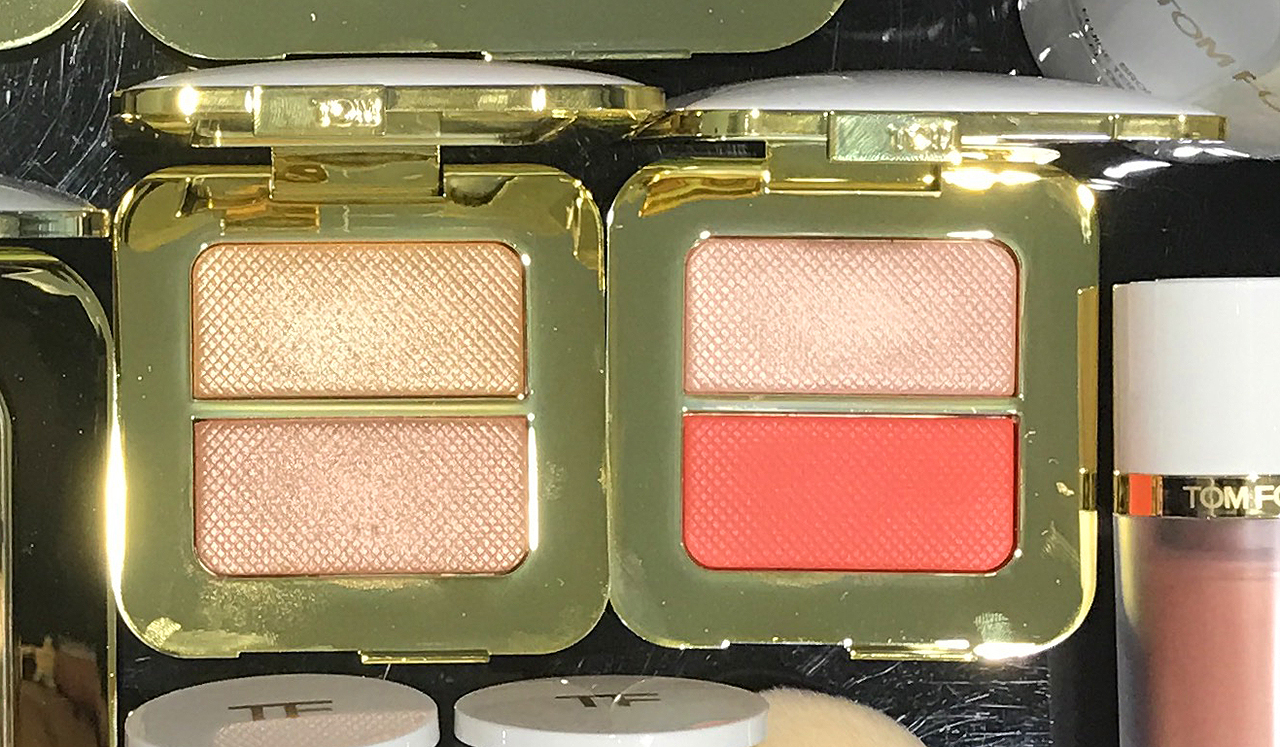 As you can see, both pull warm-ish.  Paradise Lust (on the right) is noticeably warmer and more coral than last year’s Bicoastal.

Again, I feel that Paradise Lust is more pigmented than last year’s Bicoastal, but if you already have plenty of coral blushes and cannot justify getting both of them, I suggest picking up Reflects Gilt instead.  One can never have enough highlighters in this day and age, and both shades are so pretty, I am tempted to wear them on my eyes too!

For fans of Tom Ford bronzers, the beloved cult classic has been reformulated this season.  I failed to capture a picture of them at the preview session I attended, but there is a noticeable bump in the pan, so the powder is not flush with the palette but slightly raised.  Cosmetics aside, the new Ultimate Bronzer now comes in a hybrid liquid and powder formula has a bouncy airy texture that stays on for up to 10 hours.  Available in the 3 usual shades – Gold Dust, Terra, Bronze Age.  And to accompany the new bronzers, Tom Ford has released a retractable Soleil Bronzing Brush.  This is a dense synthetic brush with a pointed rounded tip. 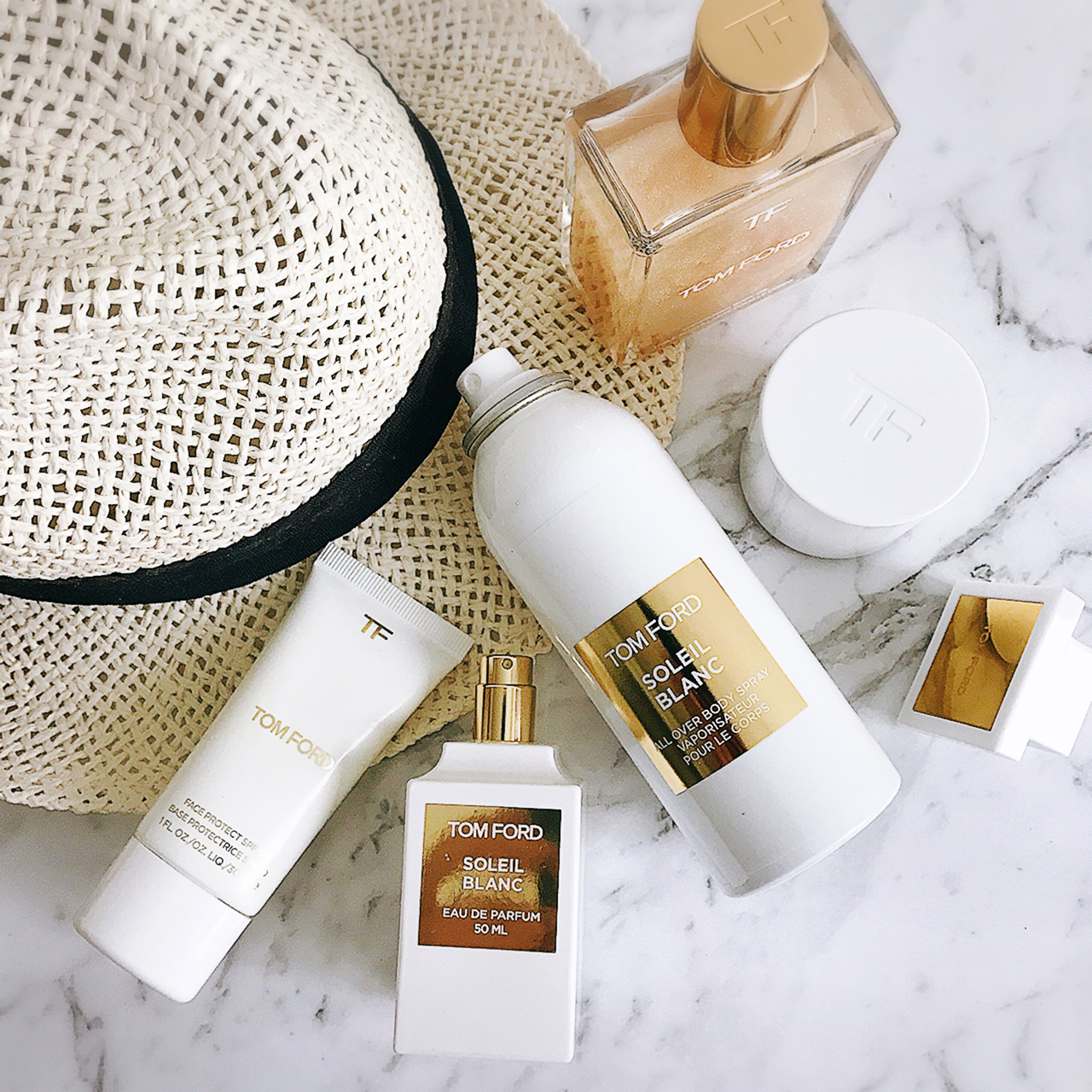 Apart from the color collection, Tom Ford has also added a few new pieces to the Soleil Blanc body line.  I am particularly loving Soleil Blanc All Over Body Spray.  This comes in an aerated spray can, and dispenses Soleil Blanc in a cloud that feels much lighter and as a result, less sweet.  This is perhaps my favourite way to wear Soleil Blanc by far!  Not shown here is a Body Oil which is colourless and shimmer-free, but hydrates the skin after all day tanning in the sun and smells faintly of Soleil Blanc.  For those who are averse to direct sun exposure, there is a Bronzing Gel (housed in a tube that is similar to the SPF shown above) that gives a healthy touch of color to mimic a few minutes out in the sun.  This can be used on the face or all over the body, and reminds me of last year’s Radiant Moisture Souffle. 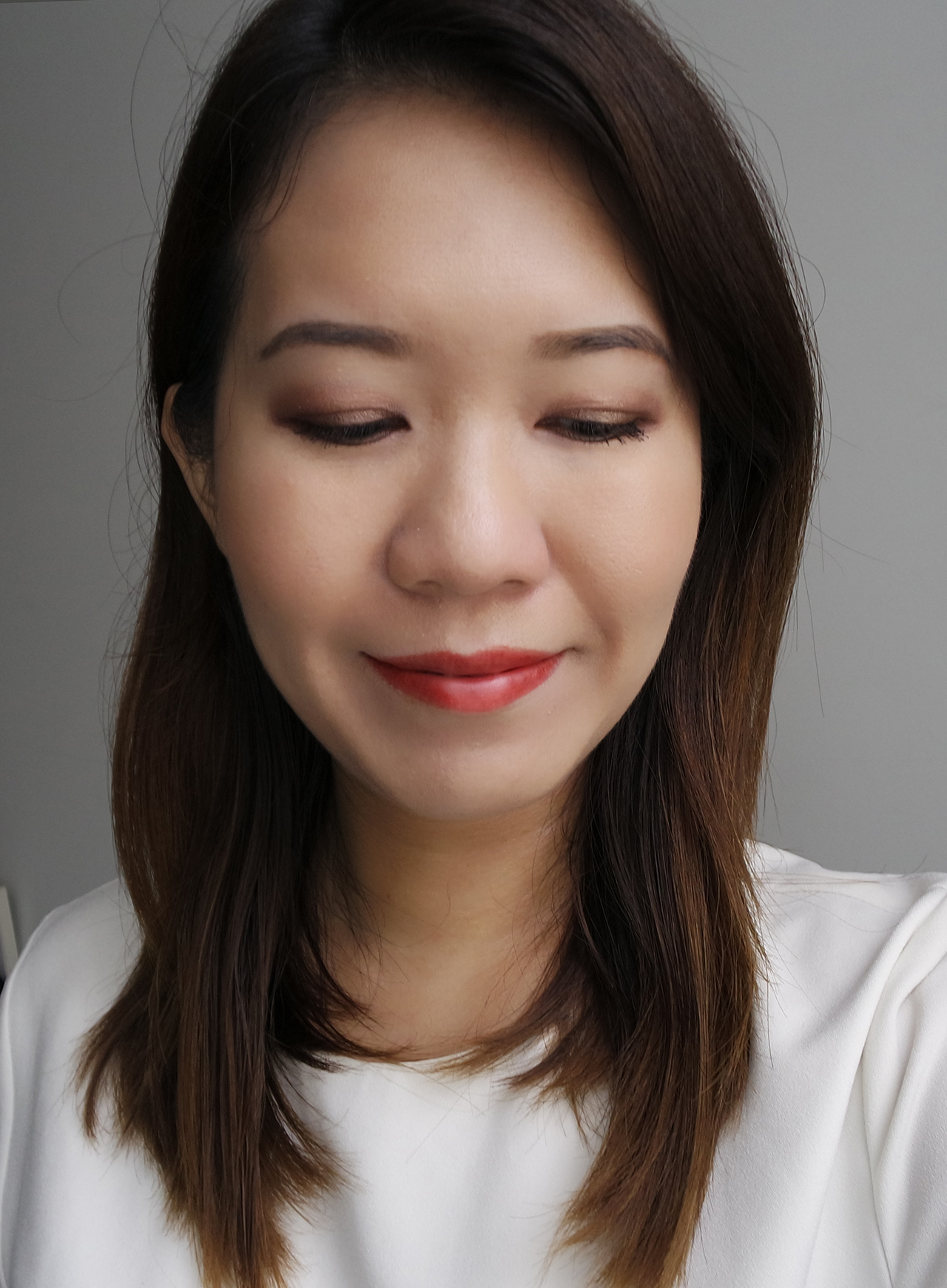 Here is a simple makeup look featuring Reflects Gilt used on the eyes, with the bronzer shade from Soleil Afterglow in the crease.  I also used Reflects Gilt on my cheeks to highlight, but the effect is lost to my camera.  On my lips is Neotropic, about 3 swipes without any primer or liner underneath. 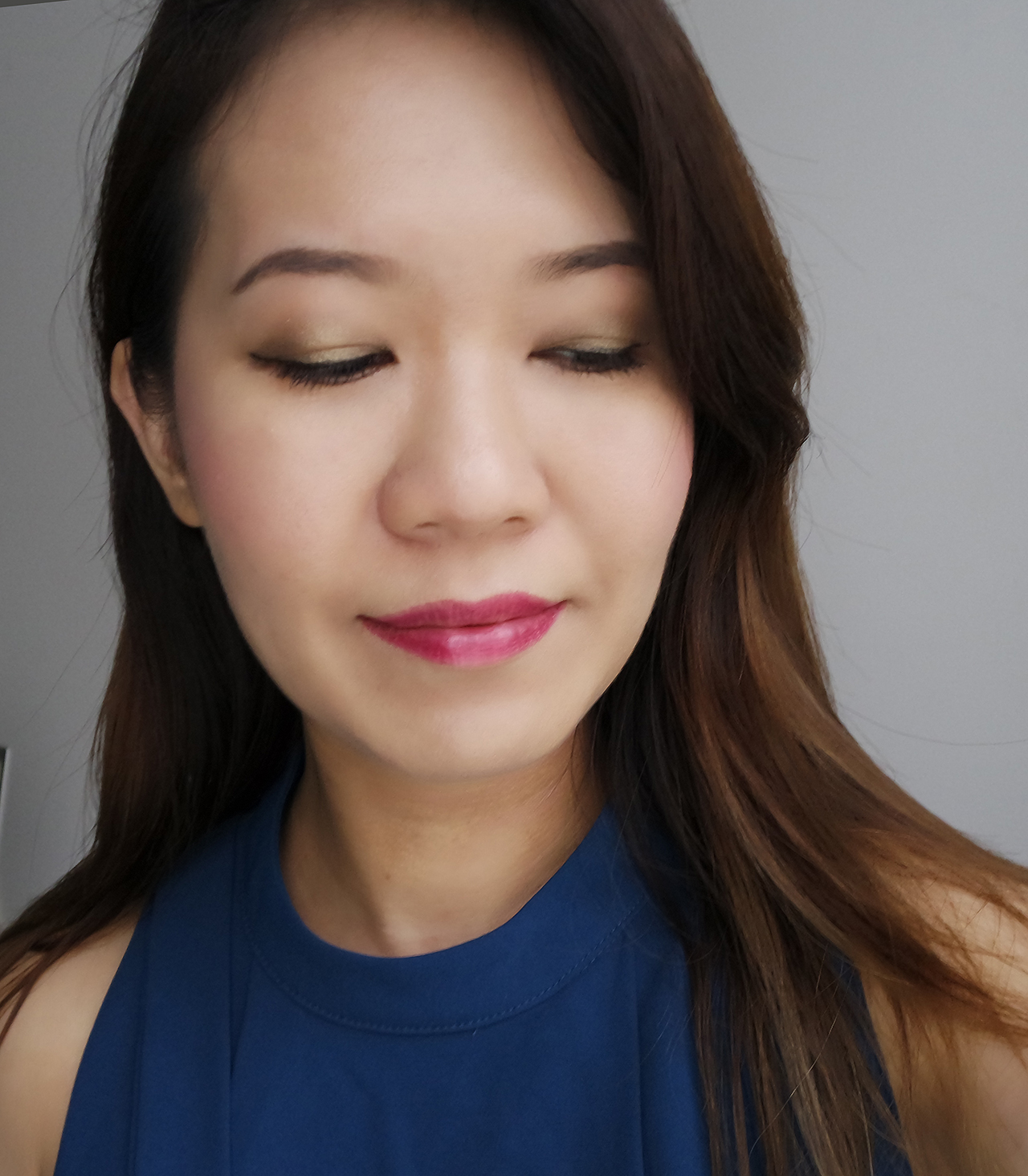 And here is another look featuring Sun Worship dabbed to the middle of my lids, on top of Platinum from Holiday 2014.  Cheeks feature all 3 shades of Soleil Afterglow – pink blush along the cheek bones from the apples to the hairline, highlighter higher up on the cheeks, and bronzer under the cheeks to sculpt.  On my lips I’m wearing Fathom lip balm, about 3 swipes without a primer or liner underneath.

Tom Ford Summer 2017 Soleil Collection will be launched in Singapore on 10 May.  As always, be sure to get there early to avoid disappointment!

This post featured some products (marked with *) that were generously provided for my consideration.  All other swatches were taken during the media preview.  Regardless, all opinions expressed here are my own honest, unbiased views.