Sunday Riley has been on my list of brands to explore for over a year now, and in particular, this Sunday Riley Effortless Breathable Tinted Primer has popped up on my radar many times. I finally picked it up from dear Gummy’s blogsale last November, and since then I’ve been asking myself where has this been all my life! 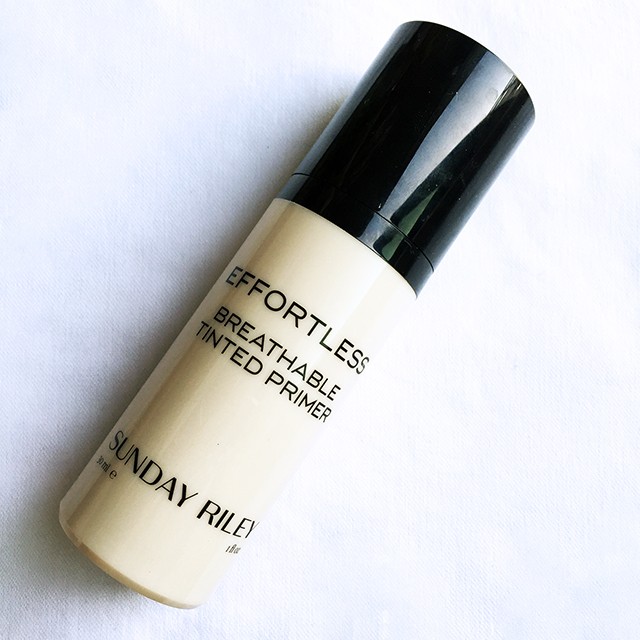 Sunday Riley Effortless Breathable Tinted Primer comes in a lightweight plastic bottle with a pump dispenser. Nothing fancy, very simple, but I did wish the bottle design was sleeker. As it is, this is the largest bottle of makeup currently on my dresser. 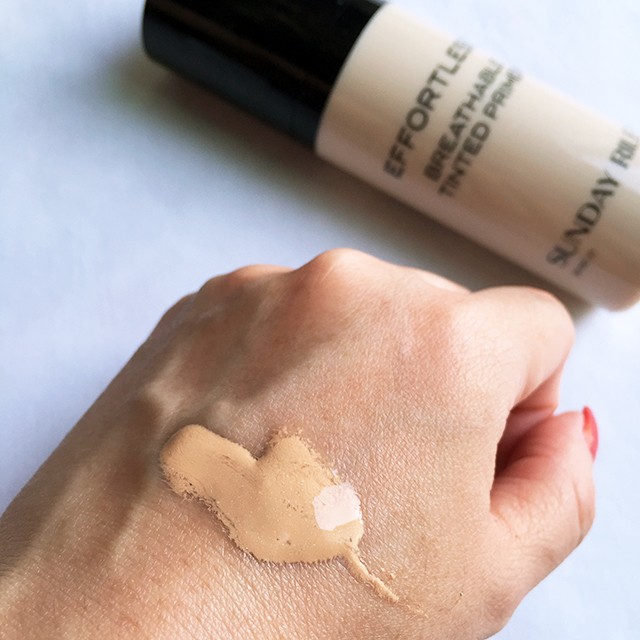 The pump dispenses quite a generous douse of product in a shot, which is sufficient for a sheer coating all over my face. You may need or want a second pump, but since it is not easy to control the amount the pump dispenses, I would proceed with caution.

The product itself is a very runny fluid, not at all like the usual silicon-heavy stiff gel-like mass market primers. There are still silicones in here, just not as high up on the ingredient list as others. It applies very smoothly, and clings to the face the way a good fluid moisturizer or sunscreen would, without pilling nor starting to look cakey the way silicon-heavy primers tend to.

The most noticeable characteristic is the color of this primer. True to its name, this Sunday Riley primer is tinted. But I’m hesitant to call it that, as images of tinted moisturizers or tinted sunscreens start floating into mind and confusing things. This is really not meant to be worn on its own the way you would with tinted moisturizers or tinted sunscreens, unless you have pretty much perfect skin already. Despite its tinting, the primer sheers out substantially when applied such that the color is barely noticeable and does not offer much in terms of coverage. What it does however, is effectively neutralize redness (which I need, especially around my nose, and on my cheeks) without drying out my skin or caking up the way foundations would. It also nicely blurs the look of pores and helps my makeup glide on more smoothly.  Also, either due to the evening out of skin tone or otherwise, I feel like my skin looks brightened. 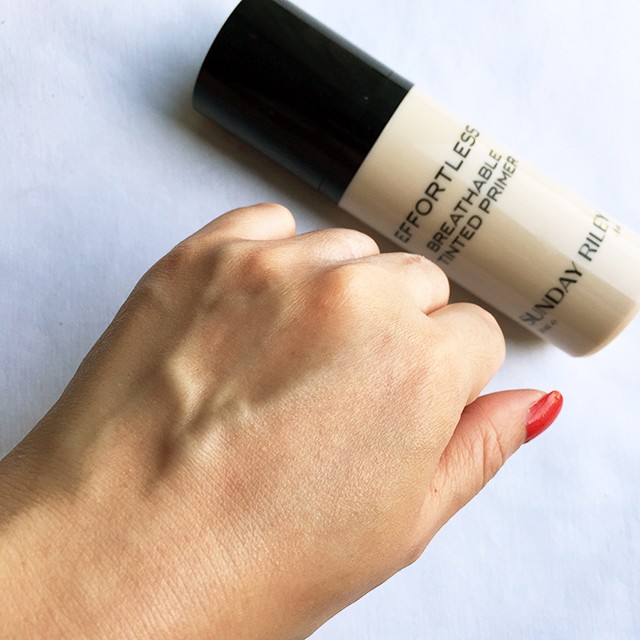 The “breathable” claim from this primer comes from the ingredient perfluorodecalin, which some studies have shown is able to dissolve and deliver oxygen to the skin. This has the potential to reduce fine lines and improve the skin’s barrier function, which are all great bonuses to have in a product that will be sitting so close on the skin for most of my waking hours. I have not been using this for long enough to be able to discern any fundamental improvements to my skin, but cosmetically, it does make my face look better whenever I have it on.

Sunday Riley Effortless Breathable Tinted Primer is a reflection of the changes in my makeup routine due to my skin’s dramatic transformation from oily to dry combination. I now can no longer tolerate thick foundations, and oil control has become a secondary concern. My t-zone still gets shiny by mid-day, but not to the same extent as before. Instead, I’m frequently battling with dry patches on my cheeks.  So instead, I prefer to use lighter foundations with sheerer coverage, and build up slowly with a combination of a tinted makeup base, sheer foundation, and concealer. Slowly building up in thin layers ensures less likelihood of my makeup creasing and caking up at the end of the day.  For my still-oily t-zone, Sunday Riley Effortless Breathable Tinted Primer manages to keep any shine to a minimum… I do get a little dewy towards the end of the day which I simply fix by blotting.  This may not be as great with oil control if that is your primary concern, but for anybody else, Sunday Riley Effortless Breathable Tinted Primer is a lovely lightweight choice!