I’m always super excited to talk about new makeup, and so this has been a super week for me.  By now I’m sure you’ve heard and seen so much of Natasha Denona that you’re either sick to death of it already, or pretty much already owned most of the collection? Well, just in case you still have not made up your mind, here’s another review to add to the stack! 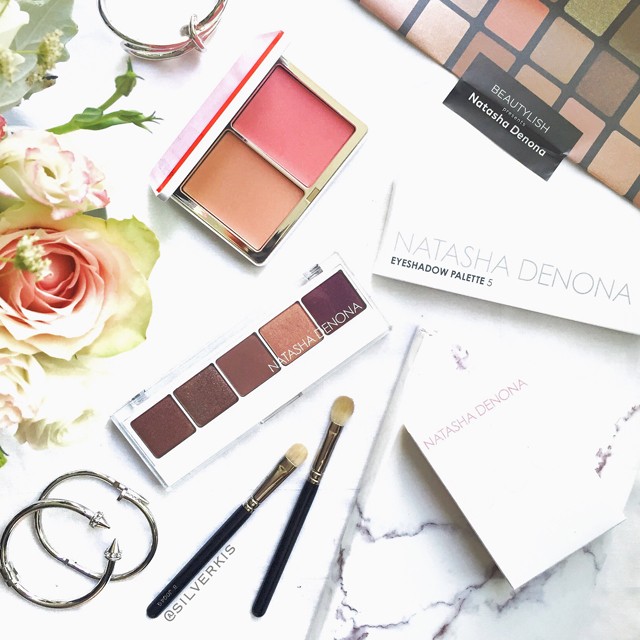 I sat on the fence for a very long time before taking the plunge, because firstly, all-those-damned-emails with pre-launch secret codes prompting you to place your order before the rest of the world was feeling rather MLM-ish.  I don’t know when I subscribed to Beautylish twice or how that is even possible, but I was receiving 2 of every email they sent out, which made… oh about a million.  The rebel in me has a tendency to do the exact opposite of what I’m told, so you can imagine how negative I had become even before the collection was fully launched.

That does not mean I didn’t spend countless hours examining the collection online, vacillating between the insanity of dropping $280 on a 28-shadow palette (don’t get me started on the instalment plan!) and the saner Palette 5.  Initially, I thought I would pick up a few singles to make up my own customized palette, but at $28 per pop, it just did not make economic sense.  Eventually, I went back to playing eeny-meeny-miny-poo with the Palette 5 selections, and settled on #2. 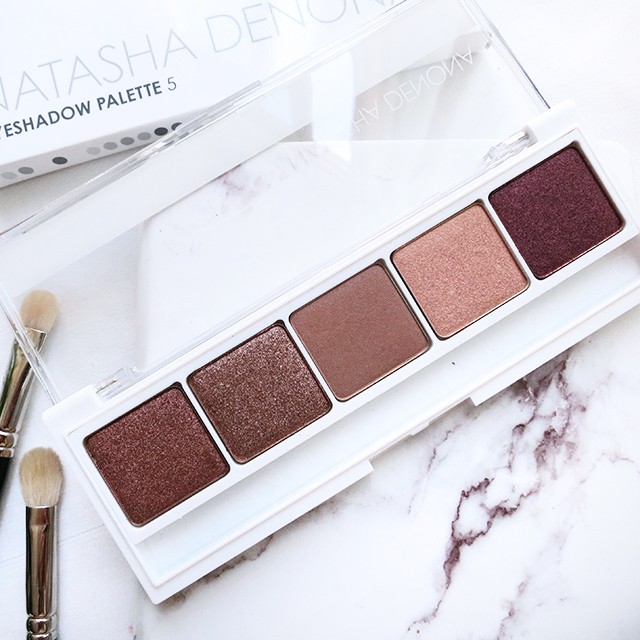 Natasha Denona Palette 5 in #2 [US$48 for 5x 2.5gm] is a stunning palette of course, those shimmering metallics took my breath away.  And I couldn’t resist dipping my fingers in almost straight away, and confirmed that they feel as buttery soft as they look. The packaging felt ok to me, even vaguely reminiscent of Shu Uemura’s customizable palettes [such as this], and I liked that I can see through the cover and figure out which palette this is at a glance.  But, I spent a very long time trying to figure out if there was supposed to be a brush included in my palette… did mine fall out?! 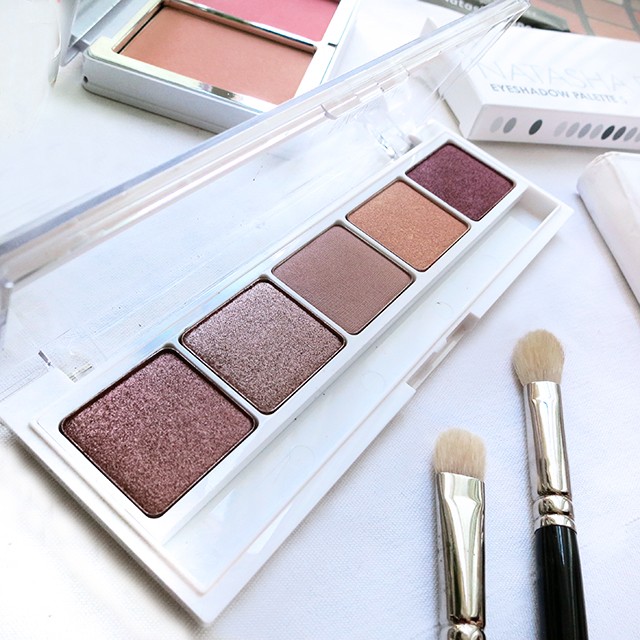 The problem I faced before finally settling on this palette was that all the eyeshadow palettes (with the exception of Palette-10) are monotonal.  Yes, even with the 28-shade palette, you had to choose between green-brown or purple-blue.  #2 Palette 5 is clearly a warm-toned purple palette with a generous sprinkling of gold.  There isn’t much variety in finishes, just 4 metallic shades and 1 velvet.  I feel like I can recreate the same palette with just a gold and purple shade.  It would have been nice to have another deeper color and a different highlight shade to give this palette more versatility and depth.

The shades are swatched according to their placement on the palette.  Their names are provided at the back of the box, but I found them not representative of the actual colours at all.  So hopefully the following descriptions will help.  From left to right:

Here is another look at the swatches to show you how strongly they flash under light: 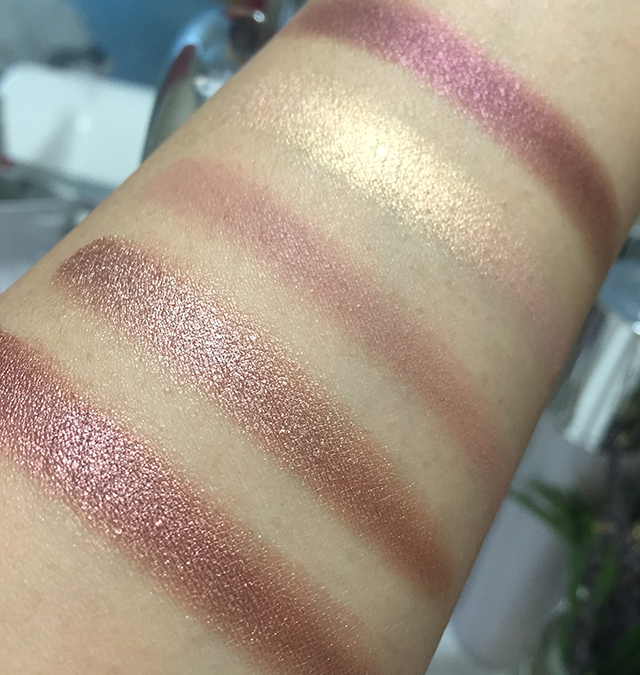 I’m glad to see the artistry roots of these Natasha Denona eyeshadows shine through, and the metallic shades certainly are well pigmented.  They blend well together, and I was able to create a beautiful eye look with the #2 Palette 5. 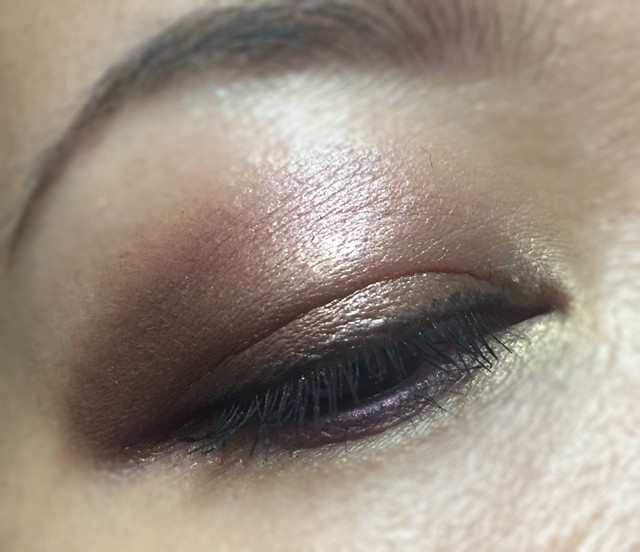 For the eye look above, I first applied Shell all over my lid as a base shade, followed by Rosewood on the outer half of my lid.  Next, I smoked out the outer corner with a bit of Maroon, carrying it down to the lower lash line.  Blended the crease with Lavender Gray, and used Light Coral on the inner corner to brighten up.  Also added a very light dab of Light Coral on the middle of my lid for dimension.  Added black liner on my upper lash line just to take away some of the redness in the shades and to define my lashes better, but it’s entirely optional. 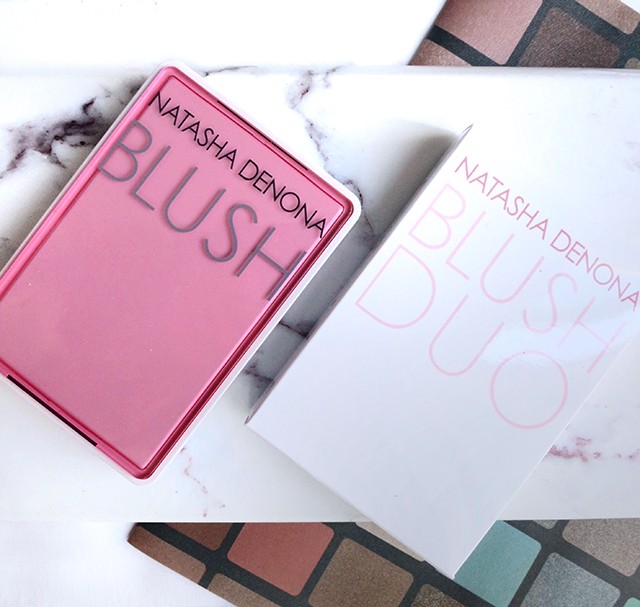 What actually tipped the scales for me and triggered my purchase was the release of the Natasha Denona Blush Duo.  Priced at USD38 for 2x 7gm, these are actually very generously sized and reasonably priced.  And unlike the eyeshadow palettes, the blush duos are packaged very attractively!  There is a good heft in my hands, and I’m very fond of the pink acrylic overlay cover and silver trims on the inside of the palette.  Well done! 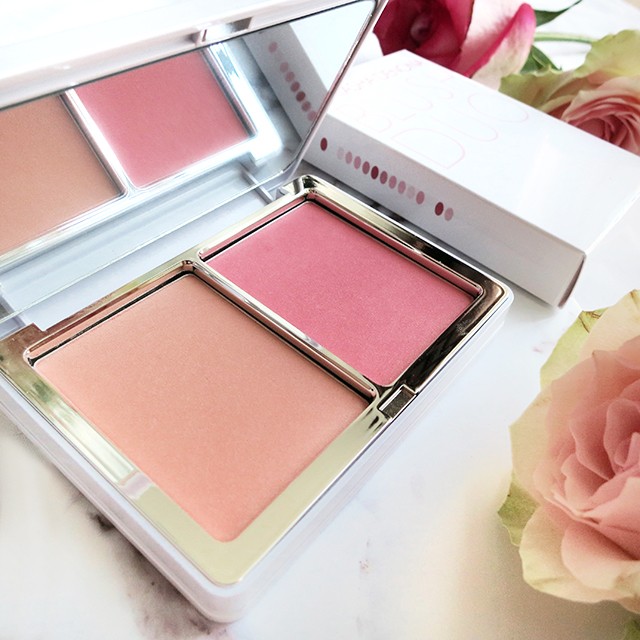 There are 19 combinations to choose from, and again I had a hard time selecting 1, but this time it is because I felt like I wanted all of them!  I must say that Beautylish had a great idea by providing sample swatches for this Natasha Denona range, but the execution is somewhat lacking.  The swatches for this particular blush duo #14 is completely inaccurate.  This is how it actually looks like on my skin: 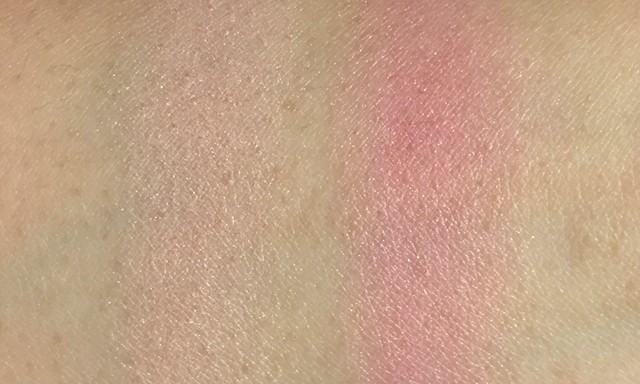 On the left side of the palette, we have 02 Toutou which is a pale baby pink with tiny champagne shimmers.  It surprised me because Toutou appears peach almost coral in the pan, but there is a strong white pigment that translates on the skin that pulls the color more towards pink.

On the right, we have 09 Golden Coral which is again a parody of names because it is a medium pink with slight pink shimmers and again strong white pigment.  This applies warmer-toned than it looks in the pan, although it is still nicely neutral.

Despite the slight shortcomings with shade descriptions, I actually rather enjoyed this Blush Duo #14.  The shades apply sheer but is buildable.  The recommended way is to first apply the darker right-hand shade on the cheeks, and then use the lighter left-hand shade to blend out.  Personally, I found Golden Coral a tad light on my cheeks and if I added Toutou on top, the entire mix disappears on my skin.  That is great for a barely-there flush, but what I prefer is to limit the lighter Toutou to just highlight the top of my cheek bones and on the apples.

And here is the overall look featuring Palette 5 in #2 on my eyes and Blush Duo #14 on my cheeks: 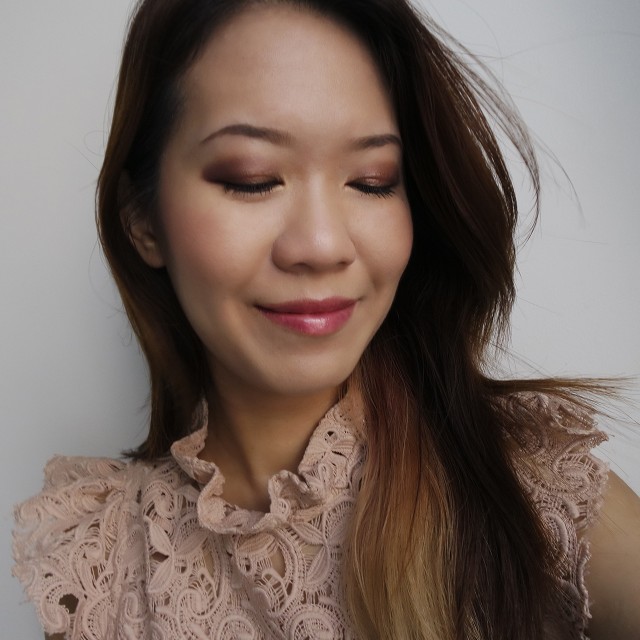 These Natasha Denona offerings have been an interesting experience.  I think they photograph amazingly, and if you are attending an evening party or event where you will be photographed frequently, these will be really beautiful and glamorous.  On the other hand, the strong sheen of the metallic eyeshadows make them difficult to wear on a daily basis.  In contrast, the blush duos are subtle and give a nice luminous flush to the cheeks.  The only thing to keep an eye on is that shimmers generally tend to emphasize pores so you may have to be careful with layering these.  I am still not convinced that anyone needs to own any of the palettes since they are so monotonal, but it may be fun to acquire a few of the singles in a variety of shades to expand your collection.