I can completely relate with popular celebrities fronting beauty launches, and especially so when the brand is owned by a media conglomerate.  But I must admit I am pathetically behind in my K-Pop news, because when I was told Dara was going to be in town for the latest Moonshot cushion launch, I asked “Dora who??” [erm, the explorer??].  To which I received lots of exasperated sighs of course, a very uncool insight into how untrendy I am since becoming a mommy.  BUT, that does not stop me from getting into the very objects of attention, which was the recently launched Moonshot Microfit Cushion and Moonflash Cushion! 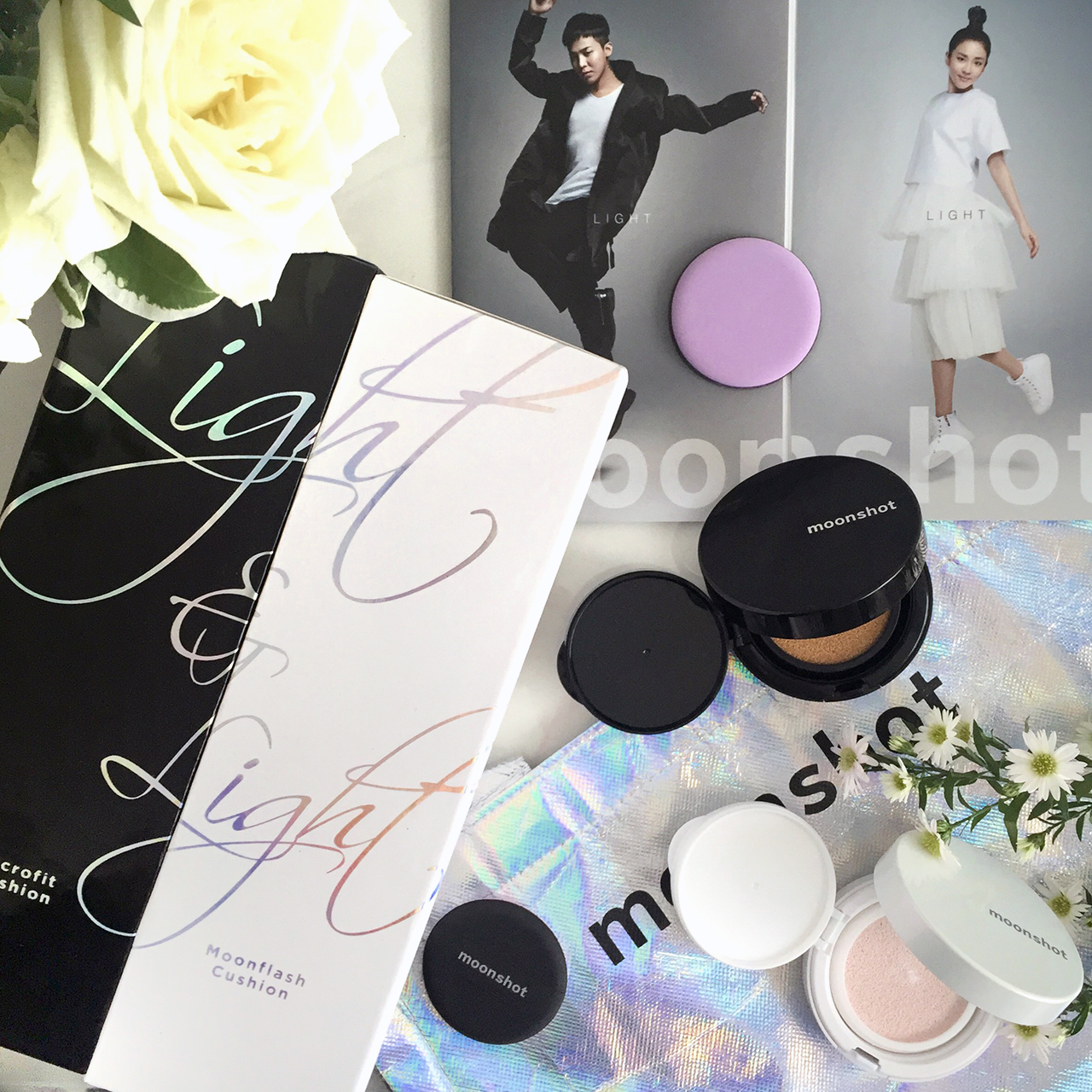 Moonshot is a relatively new beauty brand that was launched in October 2014 by YG Entertainment Group.  The brand features a line of trendy pop colors and was first introduced into our collective consciousness by Lisa Eldridge.  And now to front their new cushions, Moonshot has enlisted 2 popular Korean stars to be the face of the products. 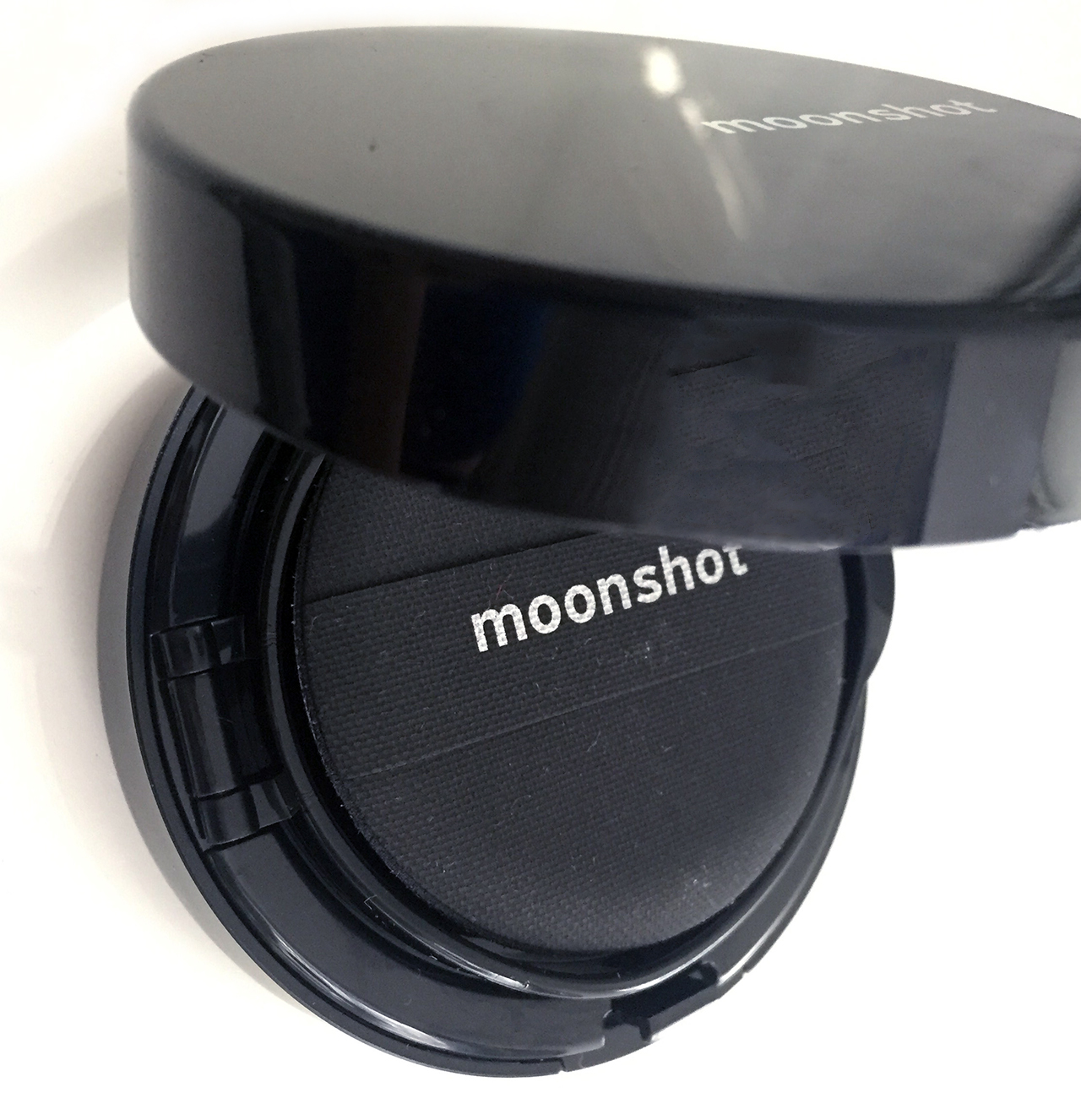 I was curious to see that the celebrity fronting the Moonshot Microfit Cushion is not  female but a guy!  And despite my horrendous lack of K-Pop knowledge, I am actually familiar with Big Bang’s G-Dragon!!  The only reason for that is because he is a regular guest on Running Man, just about the only Korean show I watch on a regular basis for some laughs, highly recommended for destressing!  GD is young, energetic and generally mischievous in a way that makes for great variety show fodder.  And I suppose it reminds us all that makeup is not all serious stuff, and there is no “right” or “wrong” way to use makeup. 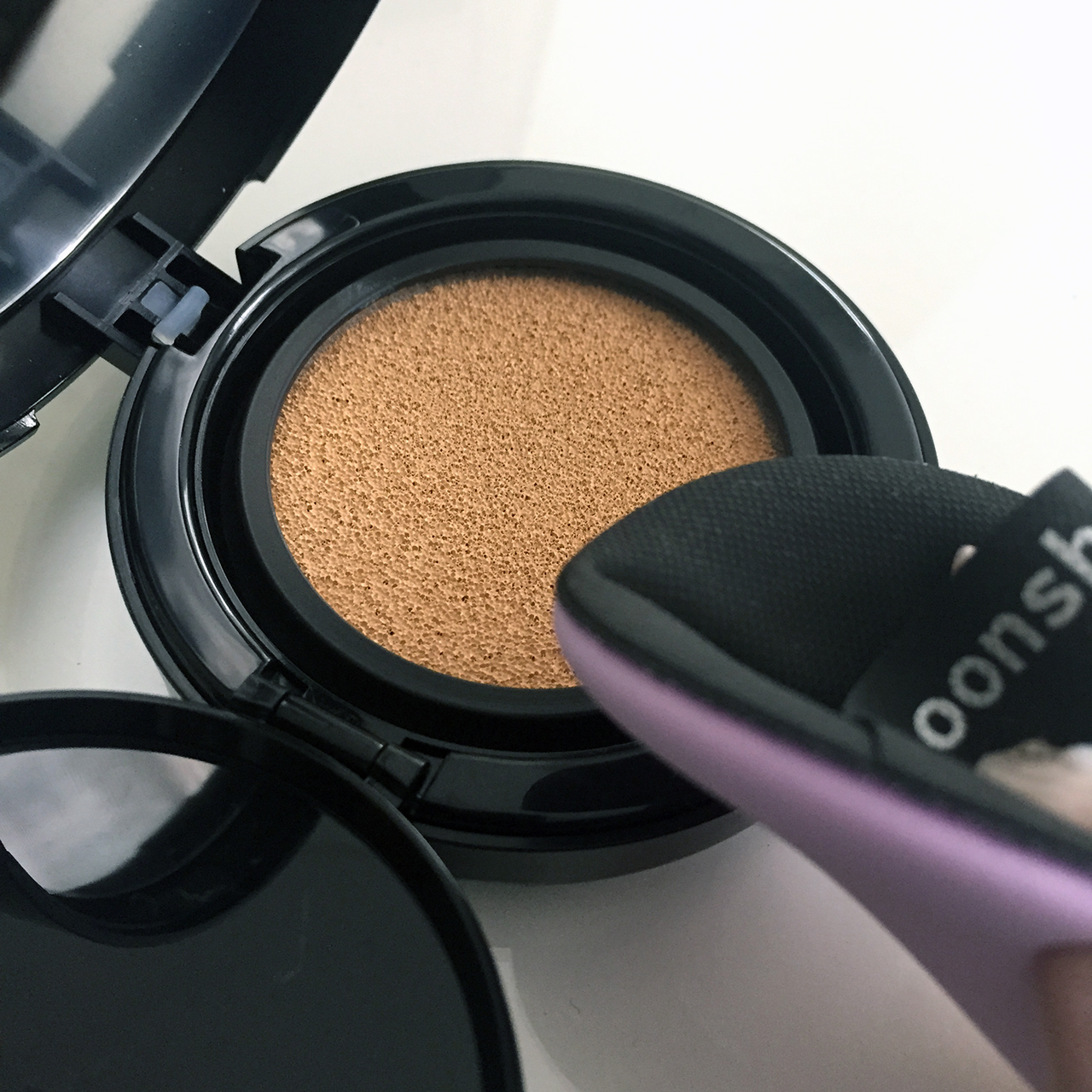 True to the fun spirit of this Moonshot Microfit “GD” Cushion, it is packaged in sleek black casing, and the applicator puff is black on top and a cool purple below!  The cushion itself is also special as it is quite densely packed, and does not feel as “wet” as most other cushions.  Just tapping my applicator puff on the cushion does not seem to pick up as much product as I’m used to, but surprisingly it is enough on the face.  In fact, this GD Cushion provides a buildable light to medium coverage, and is very lightweight on the skin.  What makes this particular cushion stand out is that it smoothens the look of pores and gives that porcelain finish! 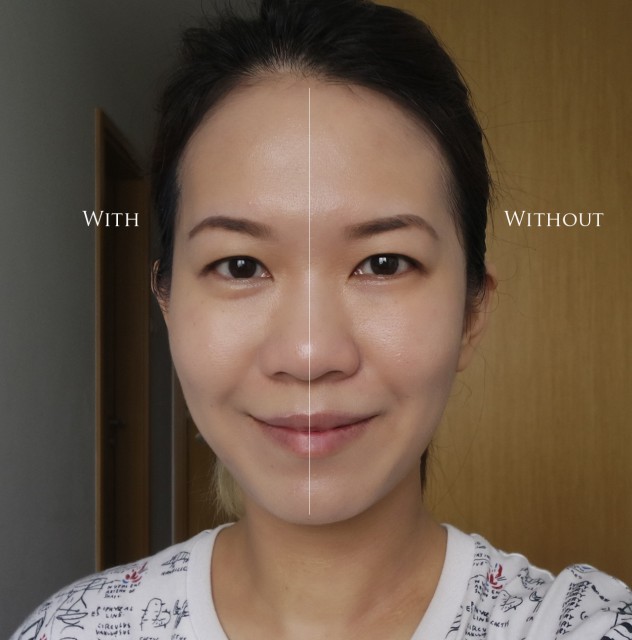 In the half-faced comparison image above, I had already applied a layer of Moonflash cushion all over my face as an illuminating base, but you can still see how nicely Microfit “GD” Cushion looks when freshly applied.  The only problem I had is that this did not last throughout my long day, but fades after about 6 hours of wear.  Also, it did not go over my dry patches well, so it is important to exfoliate and hydrate well beforehand. 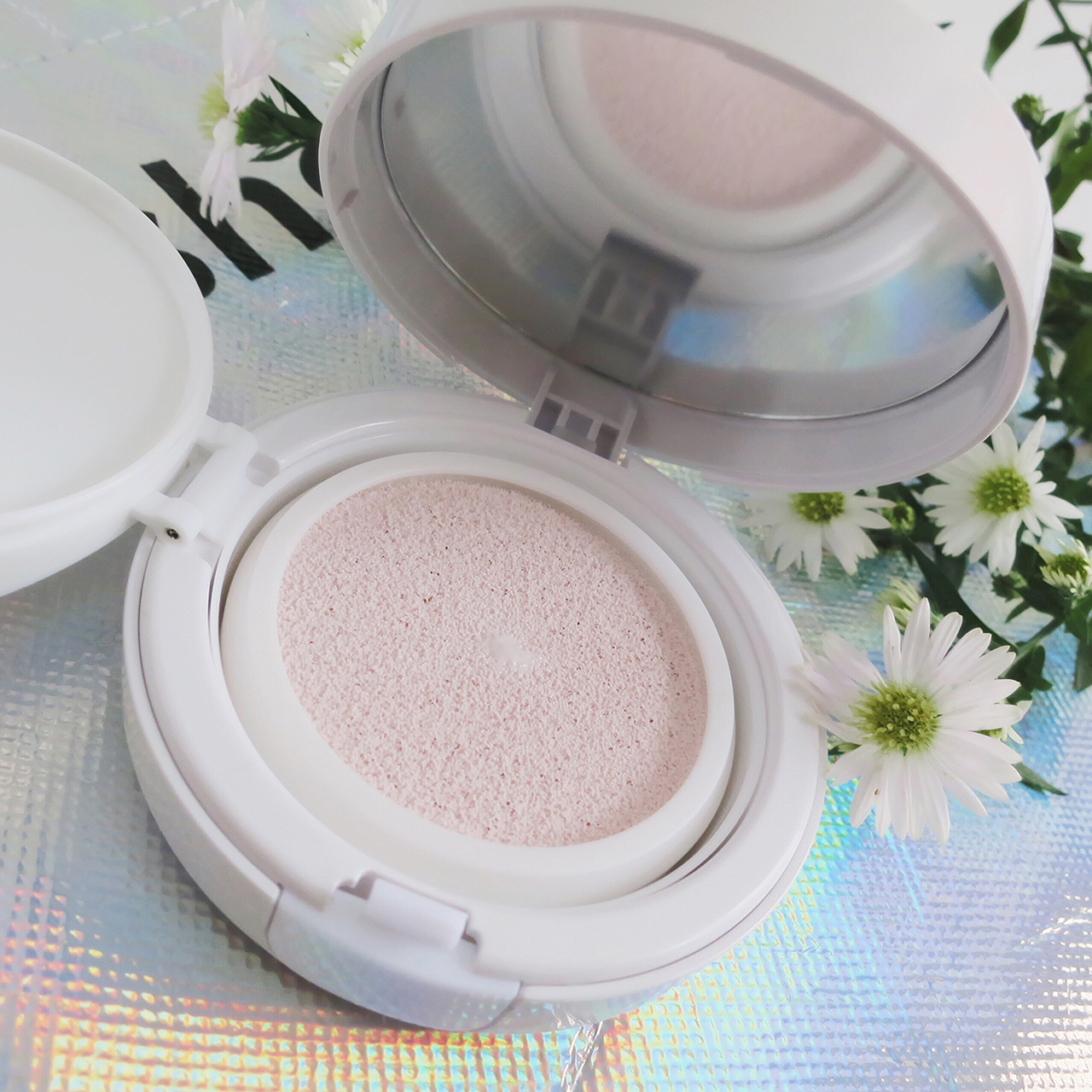 When I was initially prepping for this post, I had intended to first introduce Moonshot Moonflash “Dara” Cushion before the other.  However, after using and studying this a bit more, I think the Dara Cushion is able to stand alone as much more than just an illuminating base.  Fronted by Dara, this cushion is all about that natural, bare-faced glow.  When swatched, it gives off a pearlescent white cast, but once blended into the skin, all that is left is a luminescence that provides the perfect strobing effect for photography without being too much for daily wear.

In the earlier half-faced comparison, you can see the difference Moonshot’s Moonflash “Dara” Cushion makes on my bare face.  It brightens up and gives a lit-up glow to my complexion, without making it appear too oil-slicked the way some illuminating bases do.  And when layered with foundation or the Microfit “GD” Cushion, the result is a nice brightened look with the high points of the face well defined.  Another way of using it is to pat it on top of makeup like a highlighter, and unlike other liquid highlighters, I found the Dara Cushion much easier to blend into the skin without leaving a visible white sheen.  I have provided an arm swatch as it is easier to see, both an extremely heavy swatch so you can see the true color, and a semi-blended out swatch to show you the effect on the skin.  I didn’t blend it out all the way because otherwise it will disappear and become rather impossible to photograph.

Dara has been known to “reveal” the contents of her daily makeup pouch to the press, and no surprises, it contains her namesake Moonflash “Dara” Cushion.  The secret to her flawless, natural no-makeup glowy look, is apparently the Dara Cushion, which she sometimes wear over bare skin with no other foundation, and for touch ups.  I would probably hesitate to use it alone as the Dara cushion offers no coverage whatsoever.  And whilst it is handy for touching up the highlights, I would probably not wear this all over the face on top of makeup as it does leave a slight white cast that becomes more obvious over a full face of makeup.  Nonetheless, I do quite enjoy both the Moonshot Moonflash “Dara” Cushion and the Microfit “GD” Cushion as they give my skin a beautiful, happy glowy finish without going OTT.  The Microfit Cushion also covers over my pores and give me a wonderful flawless finish that I absolutely love!  Overall, I’m very pleased with my first encounter with Moonshot products and am curious to explore the brand further!

Have you tried anything from Moonshot yet?

4 responses to “Getting Behind the K-Pop Sensation, and Loving Moonshot’s Microfit “GD” Cushion & Moonflash “Dara” Cushion”