Pffft…what a long-winded title this is! If you followed Part I (read here) of my never-ending quest for the perfect pencil eyeliner, you’d know of my unhealthy obsession with a couple of profanely expensive pencils, i.e. By Terry Crayon Kohl Terrybly and THREE Flash Performance pencil eyeliners.  Those had some amazing creamier-than-cream textures, and drop-dead-gorgeous color intensity and sparkles!  But I’m not convinced they fulfill my most basic need for hither-may-come bulletproof longevity on my oily, heavily-hooded, hidden double folded lids.  For the well-being of my wallet, I continued my explorations in the world of mid-priced beauty brands.  To keep this post from becoming too unwieldy, I have decided to split my mid-ranged findings according to brand origin – Western vs. Asian. 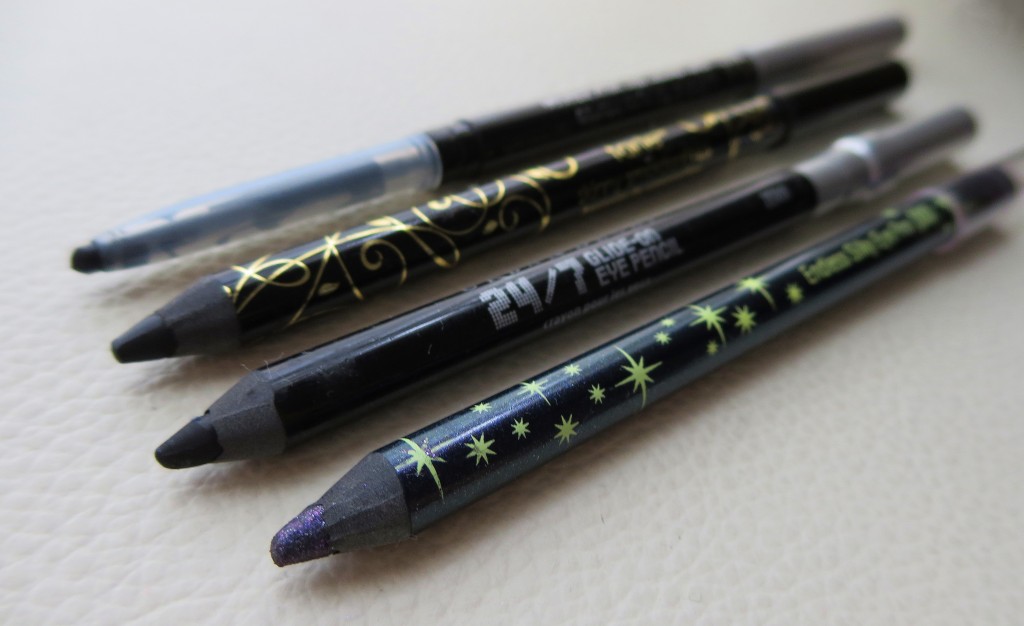 Clinique Quickliner for Eyes Intense has a swivel-up design similar to Chanel Stylo Yeux, but it is not as well designed as Chanel’s, made to only swivel up and not back down.  The opposite end is a sponge smudge-tip, unfortunately the one that I have was part of a special bundle set and is a slimmer design so I’m unable to show you.  Unlike the Chanel, there is no built-in sharpener at the end, and much as I dislike those tiny things, the inability to sharpen disturbs me more than the presence of a redundant smudge-tool. 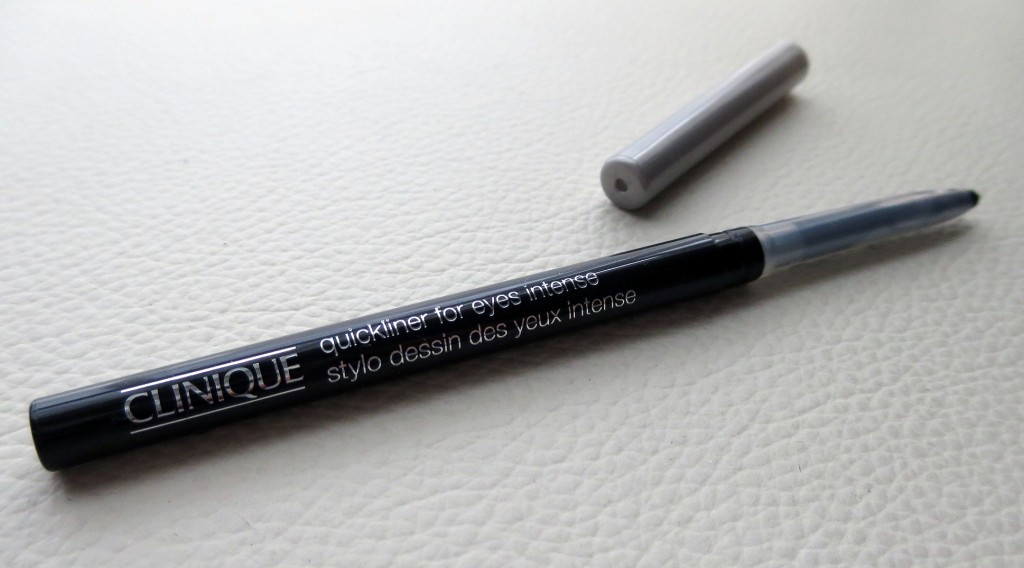 Notwithstanding the flawed packaging, the liner itself is incredibly pigmented and gives an intense look that can parallel By Terry’s Terrybly.  The texture is nowhere as smooth and creamy, still tugs and skips somewhat, but certainly surpasses Chanel.  And once set, it stays on my waterline pretty well for most part of my day.

Clinique Quickliner for Eyes Intense is easily accessible at all Clinique counters, and retails for an affordable USD16.  There are a variety of shades available, including some lovely metallic sparkly ones!  Musings of a Muse has some swatches and pictures of the smudge-tip.

Powered by Amazonian clay, Tarte’s Skinny SmolderEyes promises to nourish lids while reducing surface oil for better wear.  It is a traditional pencil format with a sponge smudge-tip at the opposite end.  Again, the ones that I have are part of the last Holiday special bundled set and do not come with the smudge-tool. 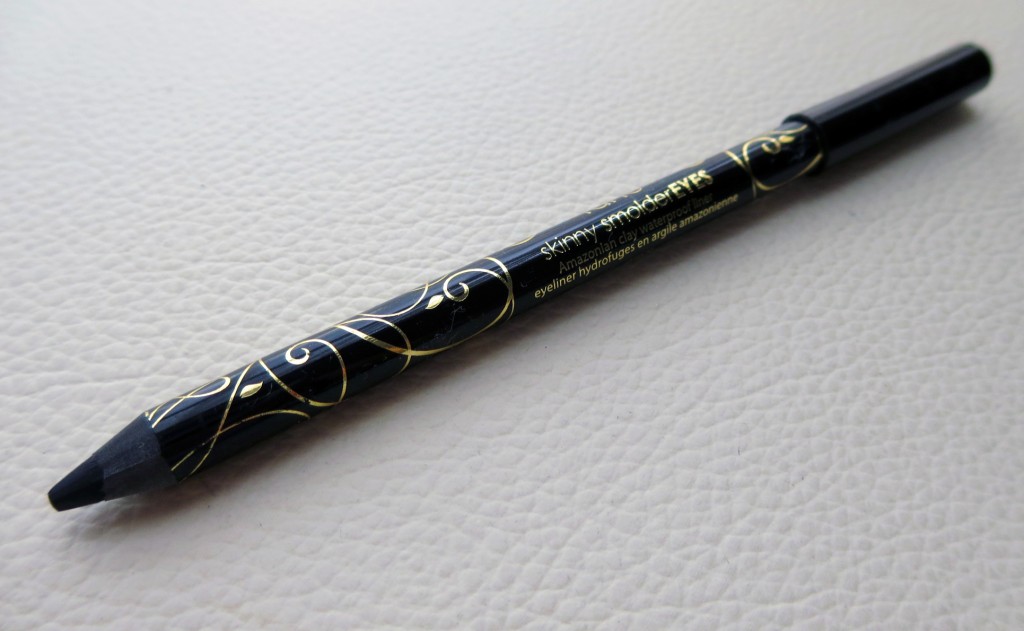 Personally, I found Tarte’s pencils to be slightly softer than Clinique’s, and equally intensely pigmented.  More importantly, I have had quite a bit of success wearing this on my upper lids as long as I keep as close to my natural lash line as possible.  On my lower waterline, it lasts through most of the day with minimal wearing off.

Tarte Skinny SmolderEyes are available at Sephora and priced at USD19, but there are often bundled sets at great values.  Similar to Clinique, there are some lovely metallic and iridescent shades available too.

These Urban Decay pencils have been around forever, and one of the first pencils I picked up in recent memory that promises to be waterproof and budge-proof.  They must be good, given the number of awards they have “won”, and spawned a whole family of lush colors. 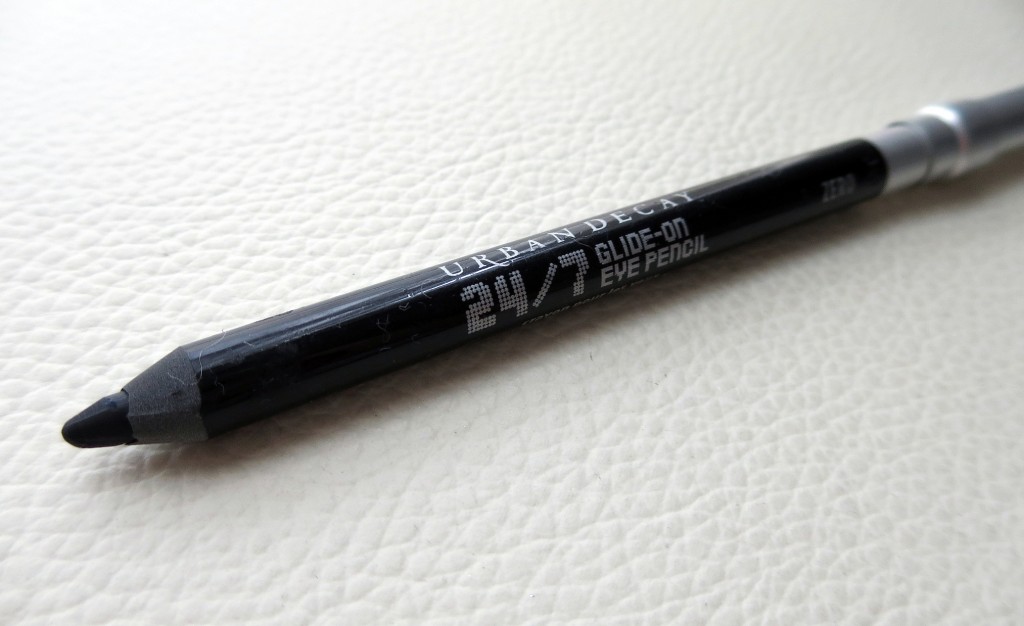 When I first picked this up, I remember this being the only thing that had a decent shot at staying for any measure of time on my waterline.  Of course, since then, there have been many more new pencils introduced, and this seems dated comparatively.  It is still smooth, but I can’t say if it is smoother than Tarte.  Neither is it as long-lasting nor as pigmented as  Tarte and Clinique.  The only real plus, is the wide range of colors, including silver and neons.

Urban Decay’s 24/7 Glide-on Eye Pencil is priced at USD19 each and available at Sephora.

Pixi is a budget-friendly makeup line from the UK that produces some lovely eye color.  It also has a tie-up with mass retailer Target in the US, so is easily accessible in most parts of the world.

These Endless Silky Eye Pens glide on smoothly, certainly the smoothest out of the handful presented here.  Unfortunately, the intensity is nowhere close to either Tarte or Clinique.  However, that may not be a fair comparison as the one that I have is not black, instead it is a shimmery purple shade from the special Holiday 2013 release. 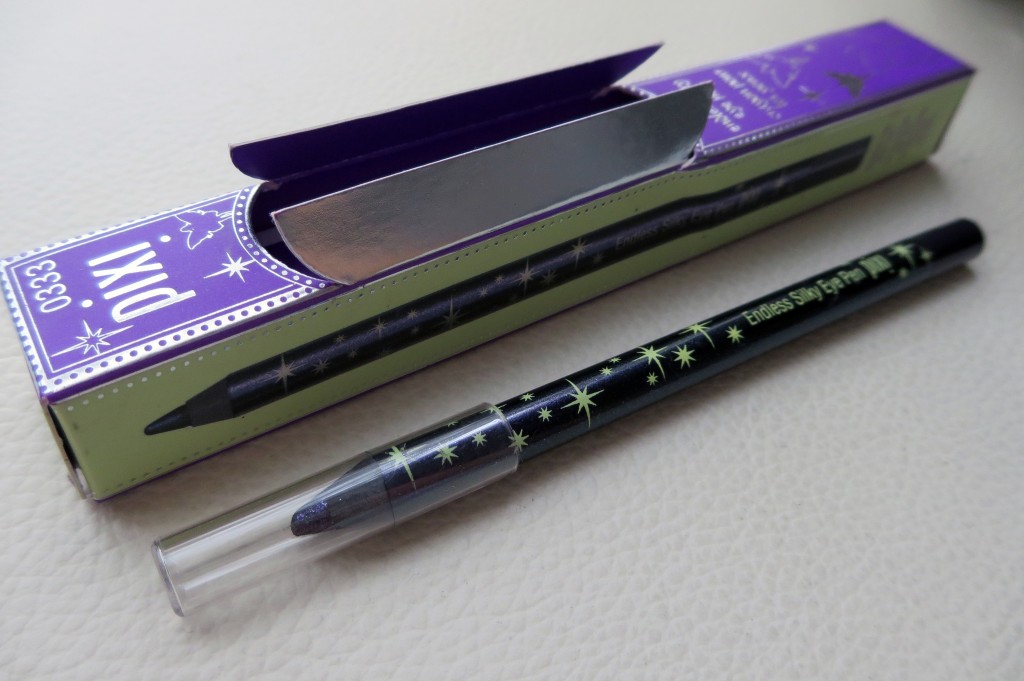 Made in Germany, Pixi’s pencils have been touted to be dupes for THREE Flash Performance Eye Pencils which are easily double the cost.  Personally, I think you get what you pay for, and whilst Iridescent Iris had some amazing glitters and goes on creamy, it doesn’t last at all on either my lash line or waterline.  And the lack of color intensity made it better suited as an eyeshadow base than as a liner.

I am hesitant to show swatches because clearly I don’t make it a point to collect only black liners, and based on my experience from Part I of this series, people tend to gravitate towards sparkly shades or certain colors, completely disregarding my commentary on textures and longevity, etc.  However, in this particular case, I happened to have 3 black liners, and the only exception being the Pixi liner; and I happen to think the swatches do prove at least 2 points.  The first being that the color intensity of the Tarte & Clinique pencils are truly the best of the best.  Second, if crisp lines are your thing, then Tarte is the way to go.  In terms of longevity too, Tarte outperforms Clinique.  And lastly, of course… the sparkles of Pixi Iridescent Iris! 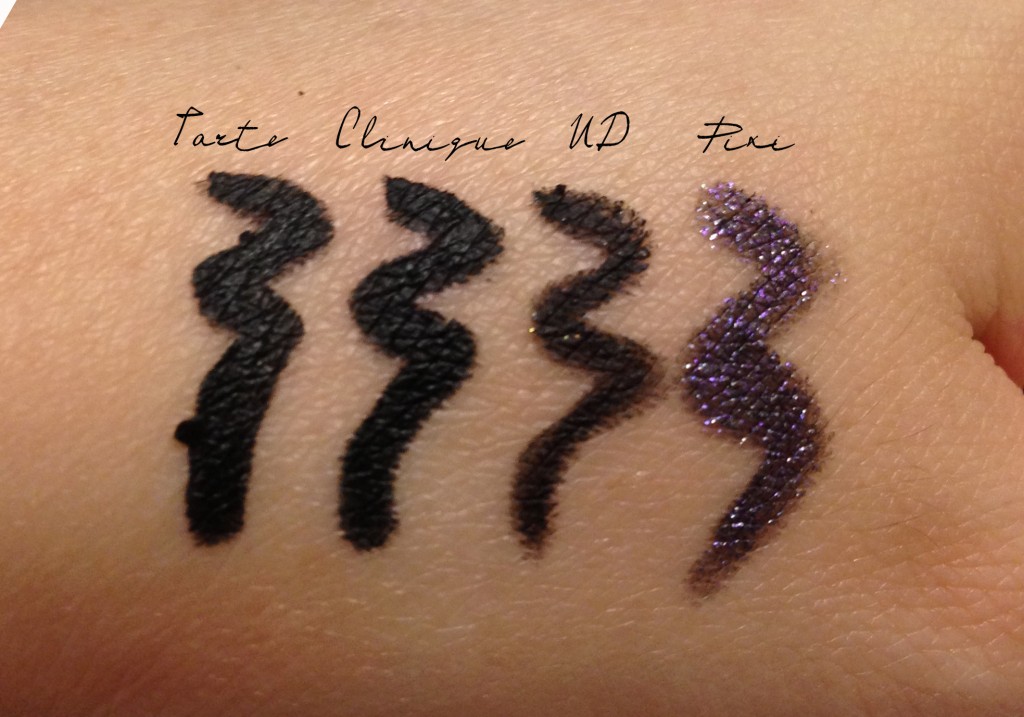 Both Tarte & Clinique are equally pigmented, with Urban Decay & Pixi being the lesser in intensity. However, you can notice some slight feathering around the edges of the Clinique swatch, whilst Tarte remains quite crisp. The shimmers of the Pixi are quite lovely but they need to be layered on for the color to show. Interestingly, even after most of the color has worn off on my lids, some of the sparkles still remain.