I have been on a witch-hunt lately, searching for the best products to keep my skin flawless throughout the day.  So, when Lancome marketed their latest foundation as ULTRA 24H, I was immediately sold!  Throw in a few freebies, I was ready to whip out my credit card without even trying it on.  That was how much I wanted to love Lancome Teint Idole Ultra 24H Foundation! 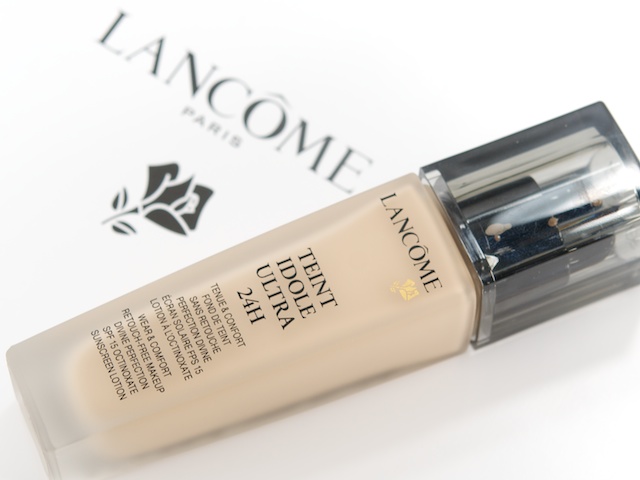 A perfecting foundation with 24-hour staying power.  This velvety smooth foundation blends effortlessly for shine-free, round-the-clock comfort. Retouching throughout the day is unnecessary with this expert formula, which took Lancome 8 years of research to perfect and unveil. Complexion stays perfectly flawless and unified. Never cakey.

The foundation came in a beautiful double-layered glass bottle that looks modern and expensive.  The sleek design takes up minimal space, which is a big deal for hoarders like me.

Having tried so many silky formulations lately, I was disappointed by how “coarse” the Teint Idol Ultra 24h was.  It felt thicker in consistency, and tended towards streaky.  I used my Sigma flat-topped kabuki brush which usually made applying fluid foundations a breeze, but it was still some work to blend properly, especially under my eyes.  My skin was also in one of its moods, and the Teint Idole made a cakey business out of one of the patches.  Weirdly, it also seemed to have accentuated my pores (something i’ve never noticed before?!??)!

Having said that, this was surprisingly light to wear given the texture.  This is perhaps the greatest difference from its previous incarnations.

The first time I was at the Lancome counter, I was matched with O-03, which was described as a neutral shade.  After I applied it all over, I found myself looking rather dull.  Although Lancome described it as giving a “satin” finish, I found it to be completely matte.  Compared to my daily wear Guerlain Parure Extreme, there was a noticeable lack of luminosity.

I then went back and had another SA try on a few other shades, and went home with O-02.  This turned out to be a much better shade for me, making me look brighter. 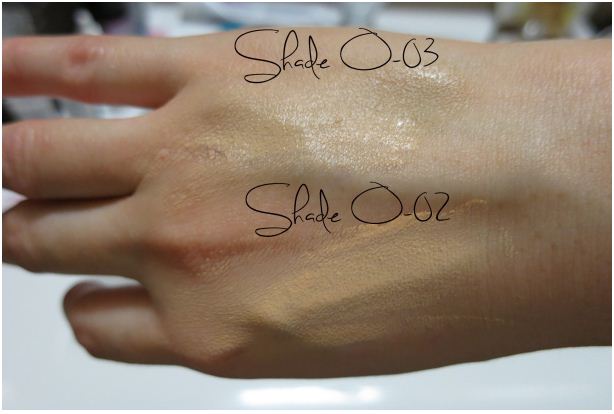 As you can see from the swatch photo above, shade O-02 has a sort of peachy undertone whereas shade O-03 is rather yellow.  And you can sort of make out what i meant by the texture being “coarser” than others.  The foundation naturally falls into creases, and needs a bit more work to blend out smoothly.

The true test, for me, was whether Teint Idol Ultra 24h would keep my face shine-free.  I took it through a regular day, layering it over my usual routine, even including my fave Guerlain Shine Control.  However, by mid-day, i found tell-tale shine on my nose.  Even after blotting, re-applying, and powdering over, I still found shine by the end of the day. 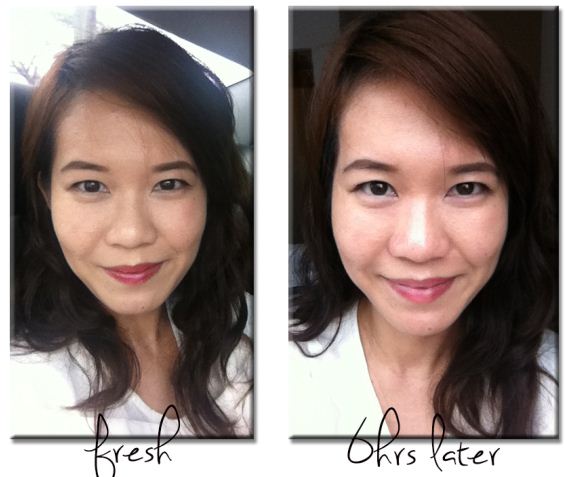 Here are my comparison shots… as they are taken at different times of the day, lighting varied.  Regardless, I did not do any touch-ups just so that you can see.  Contrary to what some reviewers online claim, this is not a full-coverage makeup.  Even after concealer and dotting extra foundation over my spots, you can still see a recent pimple scar on the right cheek, and a sensitive patch on my left.

Although it was fairly matte immediately after application, there was noticeable shine on my nose and cheeks a mere 6 hours later.  It is hard to tell based on the photos, but the foundation has also oxidized and turned darker.

This foundation actually breaks down as the day passed.  At the end of a long work day (mostly indoors), the foundation had pretty much disappeared, settling into my nasal labia area and under-eye creases.

Although priced on the “cheaper” end of the high-end make-up range at $66/bottle, the ingredients are disappointingly inadequate.  Given the current trend of combining skincare benefits in make-up, Lancome has not attempted to do any such thing with  Teint Idole.  The product is entirely made up of slip agents and chemicals.  It has an SPF rating of 15 (which is grossly insufficient for 24h wear!), but lists minimal (if any) sunblock ingredients at all.

The pin in the grenade, was the horrible nonsense I had to endure from the Lancome SAs (both times).  When I asked, how is it that I still noticed shine on my nose despite the 24h mattifying claim (a chance to cross-sell a “good” primer perhaps?), the SA blamed my loose powder.  When I asked why is it that the makeup made me look dull (perhaps the wrong shade??), the SA again blamed my loose powder.  Neither responses made any sense, since I used the same loose powder (La Mer translucent + Guerlain meteorite!) that I used with my usual makeup.  Furthermore, loose powder sits on top of foundation… if anything, it should help contain shine, not make it worse!

They say the higher your hopes, the greater the disappointment.  It is so true in the case of Lancome Teint Idol Ultra 24h Foundation! I’ve never been more glad to have walked away from an impulse purchase!

Have you tried Lancome’s Teint Idol Ultra 24h Foundation?  Let me hear what you thought of it!