The Hourglass Ambient Lighting Palette was part of a large collective Sephora haul last October, and was soldout almost right after I picked it up.  I procrastinated on this review because I was very much on the fence on this product, and as all the rave reviews came flooding in, I was even more torn.  I hate to be flouting this now, but given that 2 of the 3 shades in the palette are part of the permanent Hourglass Ambient Lighting Powder collection, I thought I would spend some time on those particular shades. [UPDATE: This palette is now available permanently on hourglass.com!]

The Hourglass Ambient Lighting Powders are finishing powders designed to recreate the effects of several flatting lights upon the skin.   These are high technology powders with micron-sized spherical particles to refract light to smoothen out the skin surface and bring out radiance.  All Hourglass products are free of parabens, talc and fragrance, which are all good news to my ears. 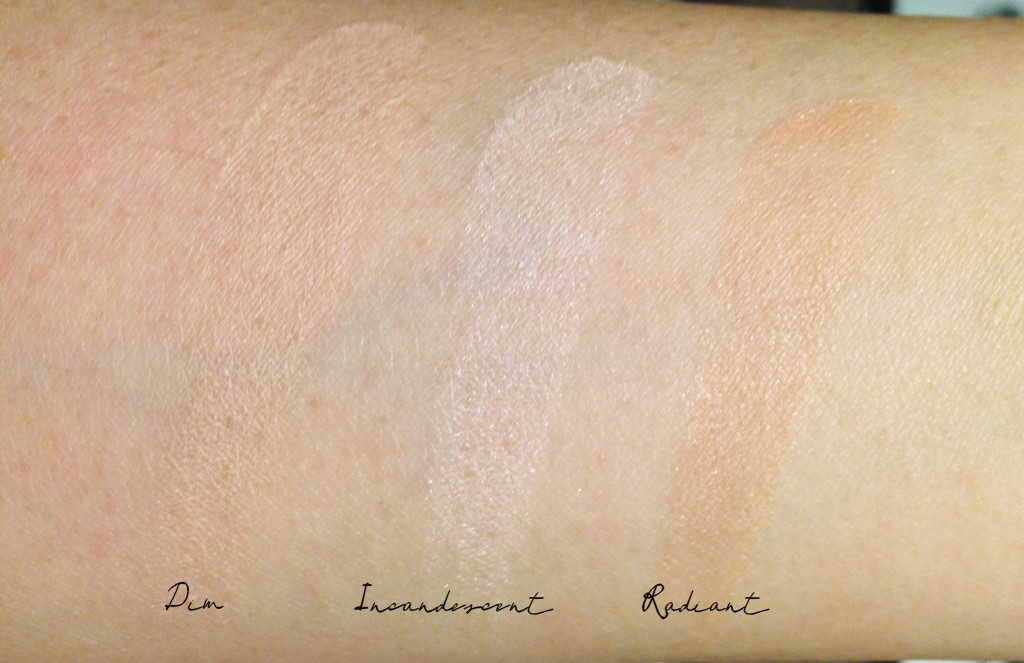 Hourglass Dim Light (left most shade in the Ambient Lighting Palette) is a neutral peach beige powder.  It is the most translucent of all the 3 shades in the palette, and has a very subtle satin finish.  Even heavily swatched, the color is barely visible.  I use this as the final step after all my makeup is done, and just sweep it all over my face.  It creates a slight blurring effect, minimizing pores and blending away any harsh lines between makeup, etc.  The results are very subtle, you can barely see it, but is definitely noticeable when photographed.  The reason I was on the fence about this, is because I don’t think Dim Light is irreplicable.  I was very much enamored by the Guerlain Crazy Meteorites (reviewed here) which was launched around the same time, and Hourglass Dim Light just paled in comparison.  Of course, that is not a completely fair comparison since Crazy Meteorites had the brightening effects of those fuchsia balls (Wulong would perhaps be the closest to Dim Light).  The smoothening effect is as good if not better with Guerlain Meteorites, and Meteorites have the ability to really breathe life back into the complexion after layering on all those makeup, which none of the 3 Ambient Lights in the palette was able to achieve to that degree.

Hourglass Radiant Light (right most shade in the Ambient Lighting Palette) is described as a “golden beige” powder, but comes across rather bright copper on me.  It is sheer like all of the other Ambient Lighting Powders, and is meant to be used all over to add a gentle warm glow, with a slight shimmery / satin finish.  I had the most difficulty with this as the color showed up most obviously on me with its strange orange cast.  With my Asian fetish for fair, I preferred using this as a sculpting bronzer instead of all over.  In this aspect, again, I found myself gravitating towards the Guerlain Crazy Terracotta (reviewed here) which has a much more favorable color on me, and the texture just lent itself better for the more precise sculpting that I prefer.

And just in case Hourglass ever decides to make this one permanent, Hourglass Incandescent Light (middle of the palette) is a pearlescent pink with soft shimmers.  It is definitely more shimmery than the other 2 Ambient Lighting powders in the palette, and its meant to be used as a highlighter rather than an all-over finishing powder.  It reminds me strongly of Kevyn Aucoin Candlelight The Celestial Powder, which leans towards golden beige but with the same finish and texture.

Hourglass Ambient Lighting Powders have some amazing textures – they are all finely-milled, and feels soft and silky to the touch.  I do believe they make fantastic, top-notch setting powders.  But if you only have 1 spot in your vanity for a setting powder, my vote goes to Guerlain Meteorites (any one of them!).