Christmas is my favourite time of the year, partly because of the gorgeous makeup collections awaiting.  And this year is super special to me, because I get to start it all off with a big bang!  Chanel has been hitting all the right notes for me this year, and the Holiday 2015 Rouge Noir Absolument Collection is possibly one of my favourite so far.  Every single item in the collection is covetable, and I’m really excited to be able to show you some of them today! 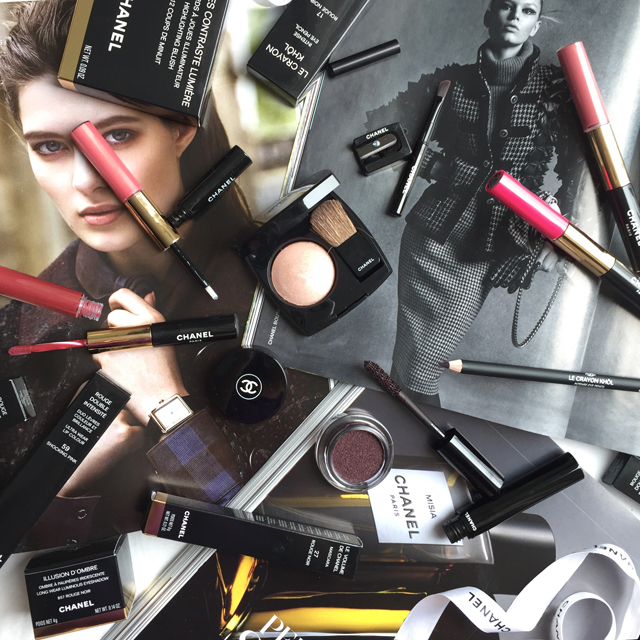 I was very blessed to have been provided with a nice selection from the Chanel Holiday 2015 Rouge Noir Absolument Collection, and will be showing you some swatches along with a full makeup look today.  The only major piece that I’m missing is the Signe Particulier Creation Exclusive 4 Ombres which I know many (including myself) are looking forward to.  I plan to pick this up as soon as it hits stores, and will promptly review it.  In the meantime, I have been really enjoying the Illusion d’Ombre (857) Rouge Noir incredibly much, and the matching Le Crayon Khol (17) and Le Volume de Chanel (27) for the eyes; and Joues Contraste Lumiere (12) Coups de Minuit for highlighting.

This is going to be a long post, so let’s start with the eyes! 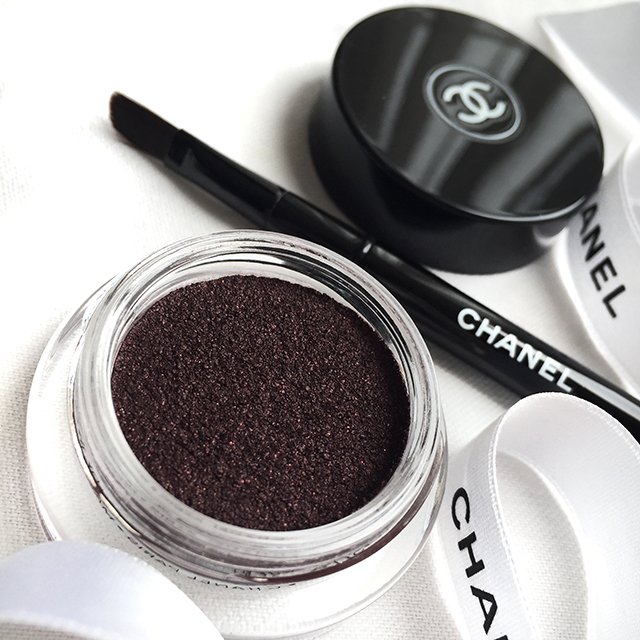 Chanel Illusion d’Ombre (857) Rouge Noir is one of those new-ish formula that Chanel had used for its Fall 2015 Illusion d’Ombre.  It is recognisable by its flat surface (as opposed to domed) and has much less visible shimmers.  When I first opened it, I thought it resembled a Giorgio Armani Eyes to Kill, but the texture is bouncy and almost-moist in a way that is distinctly Chanel.  Rouge Noir is described as a garnet red, but on my skin it translates as a burgundy.  The finish is best described as satin although Rouge Noir contains some pink and champagne shimmers as well.  It can be intensified to a smoky eggplant or sheered out to reveal more of the reddish undertones so that it pulls copper.  If a quad seems like too much work for you, and/or you are looking for an easier way to create some drama this Holiday season, Chanel Illusion d’Ombre Rouge Noir is definitely the way to go!

Here is a swatch of Illusion d’Ombre Rouge Noir alongside the other items I’d like to discuss today: 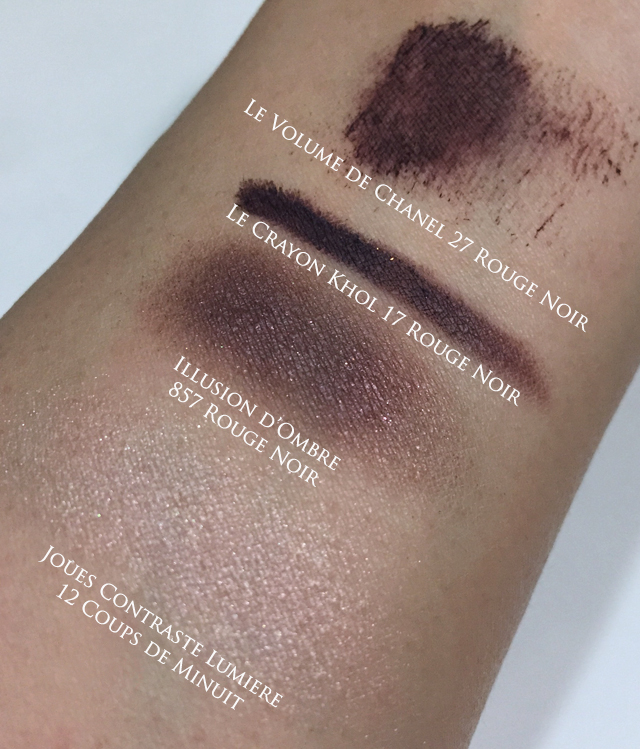 The Rouge Noir Absolument Collection was conceptualised around Chanel’s iconic Le Vernis by the same name.  It was Mademoiselle Chanel’s favourite after black and white, and has grown into a cult colour that is timeless yet unconventional.  The Holiday 2015 look is designed to be tone-on-tone play of this vampy shade, so there is a matching kohl liner and mascara all bearing the name Rouge Noir. 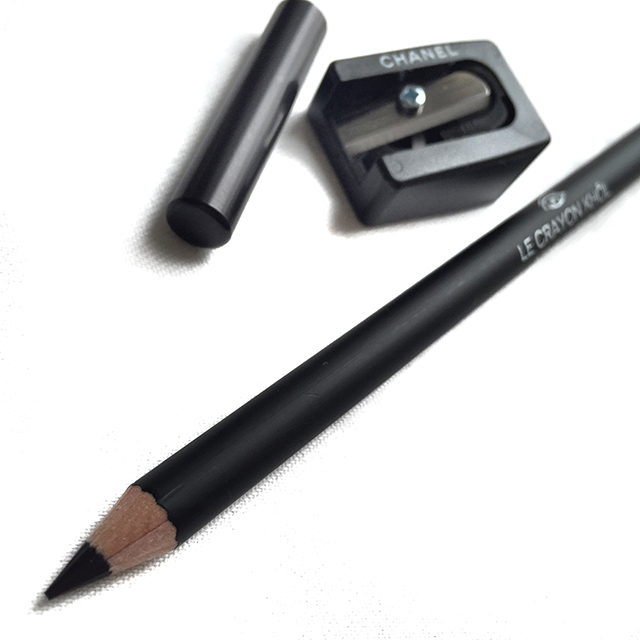 Chanel Le Crayon Khol (17) Rouge Noir is a limited edition pencil eyeliner.  It is incredibly smooth and pigmented, and is easy to blend out for a smoky wing.  Though it is mostly matte, there are some very very sparse shimmers that will show up when blended out, making this one perfect for an all-over darkening base to build up that Rouge Noir drama on the eyes!  I should point out though, that on my oily lids, this (along with most other kohls) does smudge and fade after about 5-6 hours so a good primer will be recommended if you are prone to facing such issues with kohls like I do. 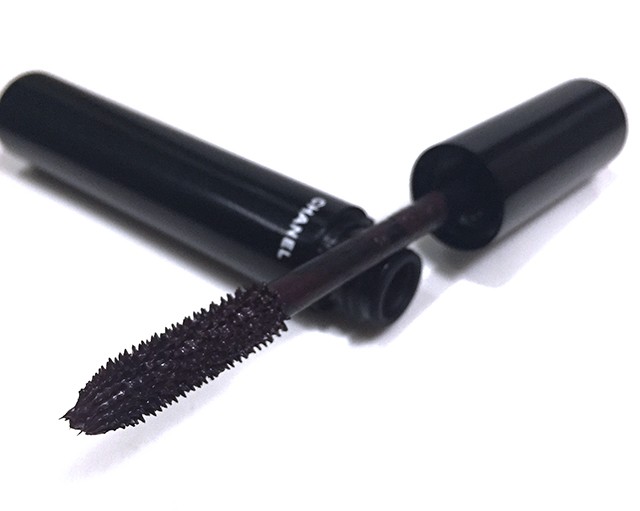 Le Volume de Chanel (27) Rouge Noir has become my lashes’ best friend since it arrived!  I have tried this mascara formula before, but somehow Rouge Noir feels completely different for me.  It instantly lengthens my lashes, pulls them skywards, and keeps them there all day without curling!  The colour is a spot-on match for the other Rouge Noir eye shades in this collection, but worn on its own over my black lashes, the colour is very subtle, almost black, but with just a sense of something exceptional.

And before I go on rambling, I would like to show you the eye look that I created using the 3 products:- 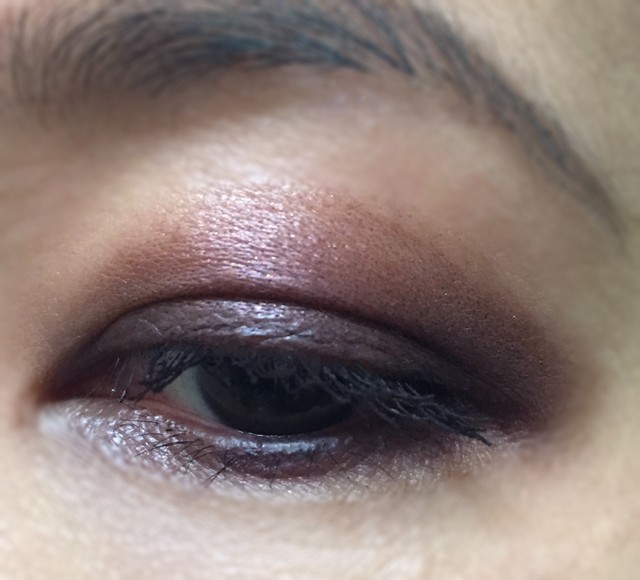 For this eye look, I first lined my eyes with Le Crayon Khol Rouge Noir and blended it out.  Thereafter, I applied Illusion d’Ombre Rouge Noir all over my lid, patting on more on the outer wing.  Finished with Le Volume de Chanel Mascara in Rouge Noir on lashes.

I will probably write a separate more detailed review on this later, but I wanted to very quickly show you the limited edition highlighting blush in this collection… 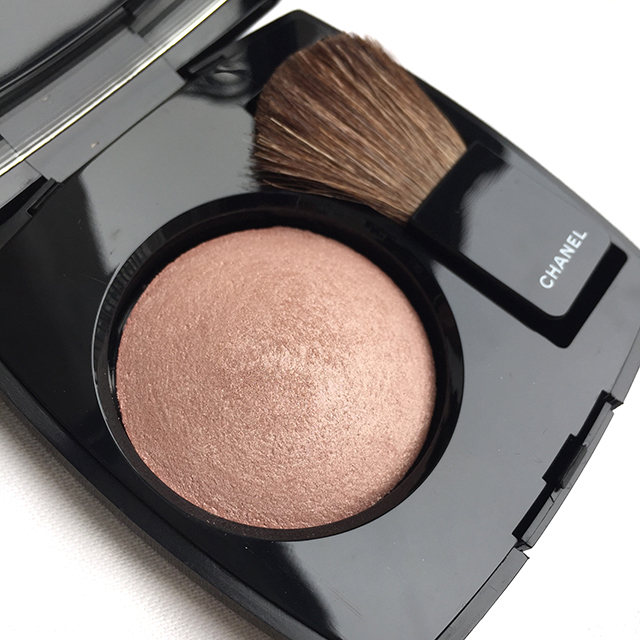 Chanel Joues Contraste Lumiere (12) Coups de Minuit is described as peach-beige, and Chanel has prescribed this as a light flush for day-time wear.  Personally, I think this is really more highlighter than blush, and the colour reference is barely a whisper on my roughly NC20 skin tone.  If you take a moment and scroll up to the swatches near the top of this post, you will be able to see how it looks like in reality.  The actual product is rather sheer, and I had layered on multiple swipes in order for it to show up in photo.  When applied with a brush, the effect is the most alluringly fresh lit-from-within glow!  I think it is an understated piece in this collection, that many may miss if shopping online, because it looks just like any other Joues Contraste blushes.  And hot after the heels of Alezane and Golden Sun, Coups de Minuit may appear to be quite similar in the warm-toned red/brown direction.  Instead, Coups de Minuit is the perfect complement for the 2 warmer blushes that preceded it, and a really beautiful highlighter for the chin / nose-ridge / between the brows, etc!!

I really cannot rave about this more… so here are a couple of full-faced makeup looks to put things into context: 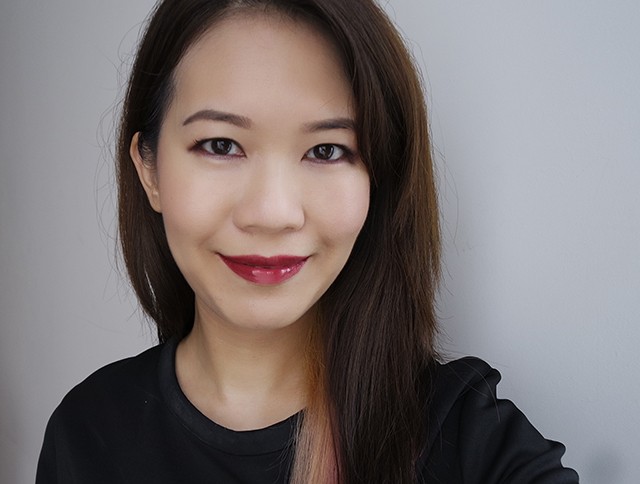 For this look, I’m wearing the Illusion d’Ombre, Le Crayon Khol and Le Volume de Chanel Mascara in Rouge Noir on the eyes.  For the cheeks I’m wearing Joues Contraste Alezane very lightly topped with Coups de Minuit – can you see how it made the apples of my cheeks pop?!  It is also dusted on the high points of my face to give a subtle glow.  To complete the look, I applied Rouge Double Intensite in 68 Plum Desire on the lips. 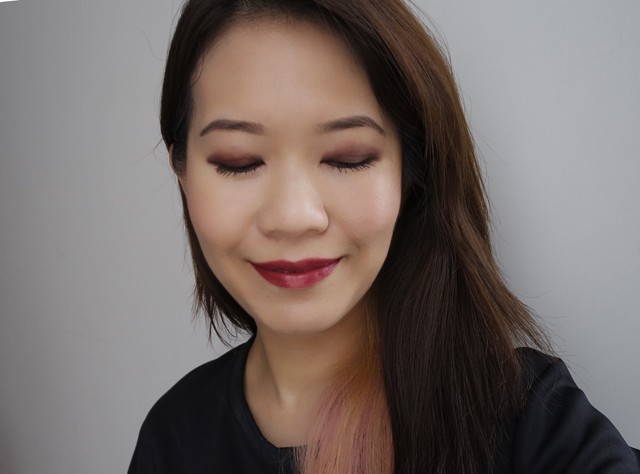 Here is an angled shot to show you how Coups de Minuit lights up when the light hits it… really beautiful for those party photography!!  Also, hello lashes!!

There are also a number of lip products that will be released for the holidays.  In particular, there are 4 Rouge Double Intensities (2 repromotes + 2 new shades) that will be launching together with the Rouge Noir Absolument Collection.  The shade I’m wearing today, Plum Desire, is limited edition, and I’m loving it!!  I will reserve my full review for another day, so stay tuned!

Chanel Holiday 2015 Collection Rouge Noir Absolument will be released on 6 October in the US and Europe, and on 16 October in Asia!  Will you be picking anything up?