There was a season in my youth, when I was fascinated by Greek mythology and the emergence of the Roman empire. What we consider myths and read as fairytales today, were once practiced religion by the dominant civilization, until that fell and Alexander the Conquerer burnt all the Greek literature. It is as much a part of history-making as is the current Syrian crisis or any other wars that men may wage. I was mesmerized by the stories of enduring love that launched a thousand ships, the eternal journeys in search of one’s identity, wars fought to establish heroes’ names go down in history. But that all faded from mass consciousness after the Romans took over, and there was a “golden age of peace” without wars, metal and sacrifice.  After Greek religion had faded before the onset of Christianity, cultural evolution had to start from a “clean slate”; and without the uncertainty of wars people were free to love again.  All that occurred during the reign of Emperor Hadrian.

“Of all our games, love’s play is the only one which threatens to unsettle our soul, and is also the only one in which the player has to abandon himself to the body’s ecstasy…”

— Yourcenar in Memoirs of Hadrian.

The story above serves to set the backdrop for Eau D’Hadrien, one of Annick Goutal’s first creations. Originally released in 1981, Eau D’Hadrien was inspired by Goutal’s love for Italy and Marguerite Yourcenar’s novel Memoirs of Hadrian. It conjures up images of orange orchards on a Tuscan summer, a picture of languid ease. Eau D’Hadrien is a joyous scent with the sparkle of Sicilian lemon, citron and bergamot; and a romantic at heart with orange blossom and ghosts of Annick Goutal’s signature rose in the background. At the same time, it has some lingering bitterness from grapefruit and green mandarin, and earthiness from cypress, reminding us of a bygone era. Ultimately, the presence of aldehydes gives Eau D’Hadrien that familiar tang of metal, and an imperial coolness that one would expect from a roman emperor. 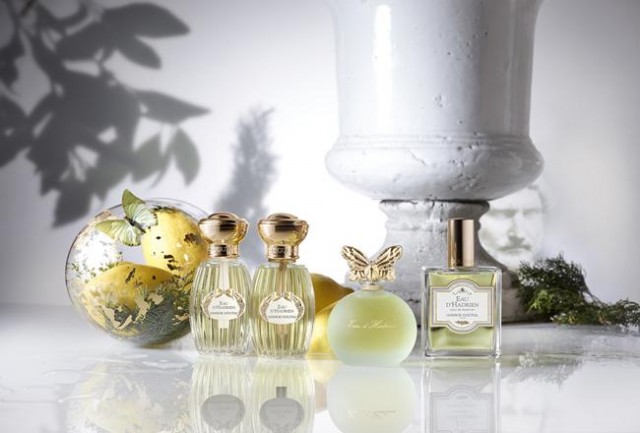 Annick Goutal Eau D’Hadrien is available in either a masculine square glass or the more feminine decorative bottles. From time to time, there are also limited edition releases in special glasses. The one I have pictured at the top of this page is a miniature shaped after the masculine version, but the juice is the same.

When I first applied Eau D’Hadrien on my skin, I immediately noticed the smell of lemons, though not the sugary sweetness or saliva-inducing sour of lemonade, but refreshing nonetheless.  Within a few moments, the floral heart emerges although in the latest reformulation of Eau D’Hadrien this has been toned down to just linger in the background but nothing substantial. Aldehydes make their presence known, giving the fragrance a familiar lift and coolness.  There is a certain blandness (for lack of a better word) that is perhaps representative of the lack of cultural depth during Hadrian’s reign. There are many possibilities for a scent like this, an easy cologne for warm summer days, or a crisp refreshing scent to herald the arrival of Spring.

If you are a fan of light, crisp scents, or are seeking an everyday wearable lemon, be sure to check this out.  Sadly on me, Eau D’Hadrien proved to be fleeting, barely lasting an hour and completely disappearing after two, though it is lovely while it lasted.  Regardless, Annick Goutal Eau D’Hadrien is a classic that has survived 3 decades and won many fans over the years, and it is worth languishing over.

The miniature above was kindly provided to me by Escentials Singapore for my consideration.  All views expressed above are my honest, unbiased opinions, and are not influenced in any way.