In case you still had doubts about this new-fangled thang called cushions, here is one for the fashionista in you!  As with everything from YSL, the new YSL Le Cushion Encre de Peau is tres chic!  I got to test it along with the recently launched YSL Top Secrets Instant Moisture Glow, and would like to share them with you today. 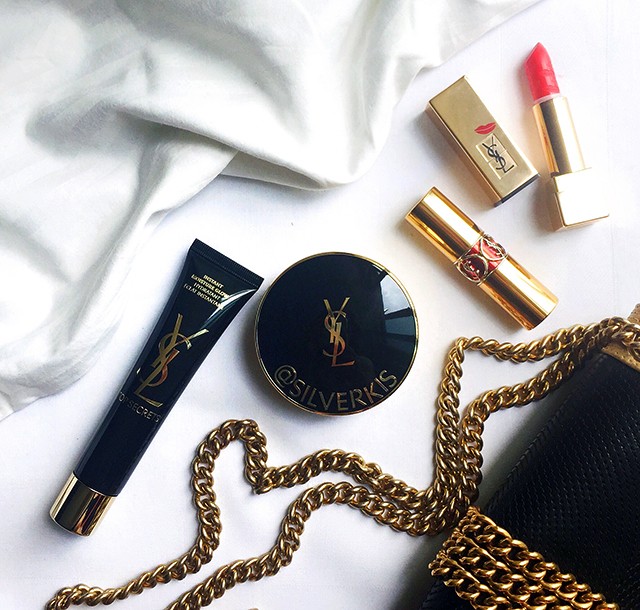 YSL Le Cushion Encre de Peau is the same Le Teint Encre de Peau Fusion Ink Foundation in a portable cushion form.  It comes in a glossy black case with golden trims, and for an additional personal touch, I added some golden stickers to spell out my nick on the cover. 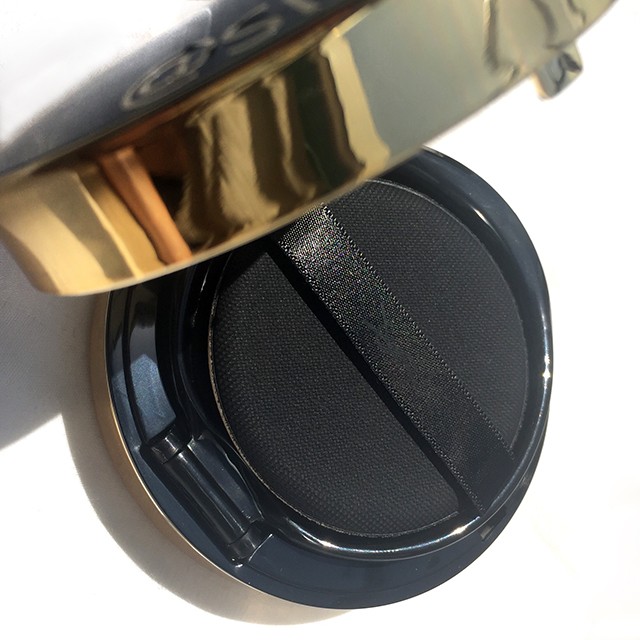 Even the top of the applicator sponge is black, and the ribbon that helps you keep your grip has YSL embossed on it although it is not showing up well in this photo. 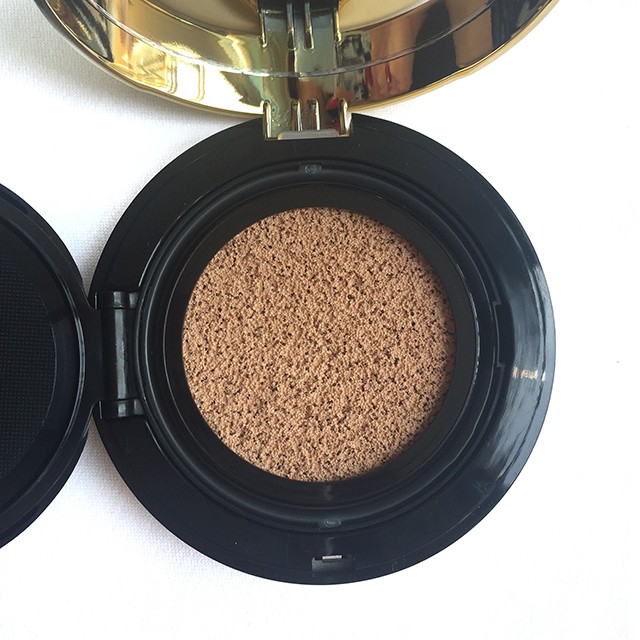 The foundation is contained within a standard sponge that is kept airtight by a swing lid that snaps securely shut when not in use.  In contrast to most of the other cushions that I’ve tested, YSL Le Cushion Encre de Peau comes very saturated and requires only the lightest dab to pick up sufficient product for the entire face.  The formula is rather pigmented, though it has the same light, watery consistency as the original Le Teint Encre de Peau Fusion Ink Foundation that it was derived from. 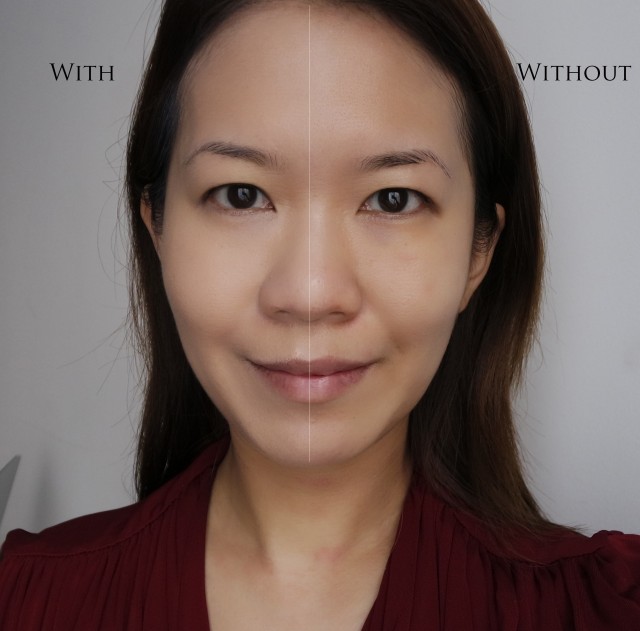 From my personal experience, the Fusion Ink Foundation was too drying and matte for my dry skin, and tended to emphasize my dry flakes.  So it was a wonderful change to find the Le Cushion Encre de Peau to be much more forgiving!  In fact, it floats over my pores and any surface bumps beautifully, and has a nice medium buildable coverage that effectively covers up my red patches and dark eye circles.  The finish is a luminous satin that has a healthy glow without being overly dewy.  Out of all the cushions that I’ve tested so far, this YSL Le Cushion Encre de Peau lasts the longest on me, it does not fade and has decent oil-control. 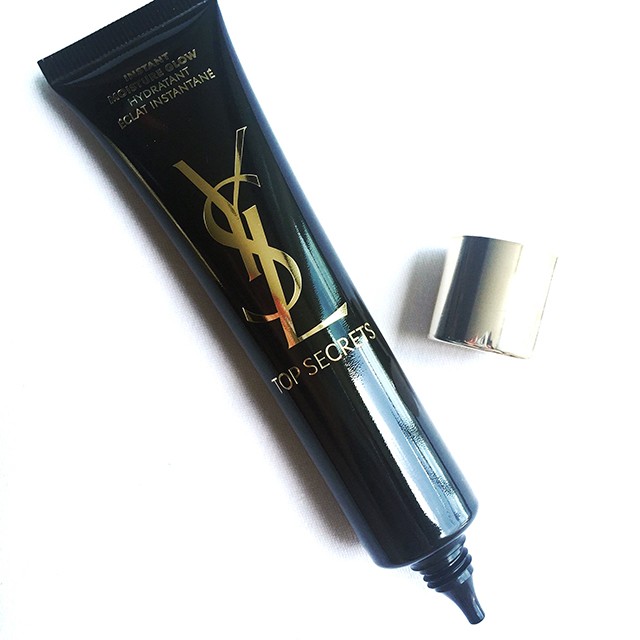 To help keep my skin well balanced throughout my long days, I’ve been favouring YSL Top Secrets Instant Moisture Glow.  This is a silky makeup primer that seals in moisture to maintain optimal level of hydration in skin, and prevent excess sebum from seeping out and ruining the makeup.  It contains a high concentration of glycerin to keep skin soft and a handful of skin-loving ingredients such as adenosine. 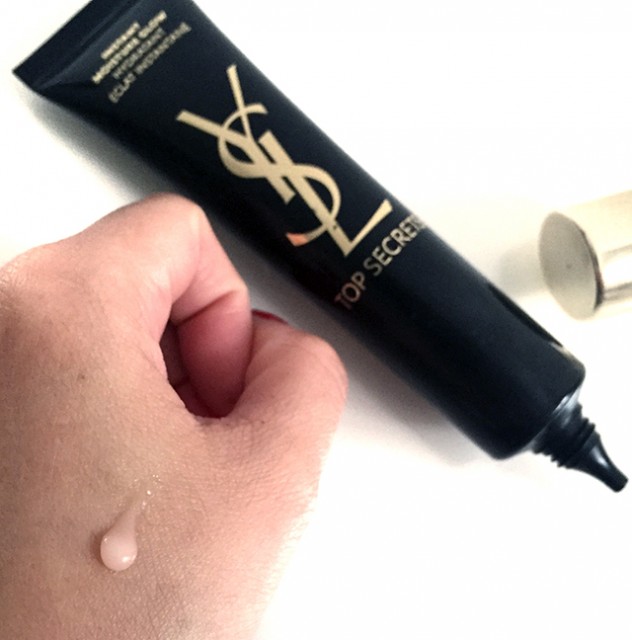 A tiny pearl sized amount like this is enough for each cheek, and I use a 3rd pearl-sized for my forehead and t-zone.  The texture felt a little silicon-y initially, but it actually melts when applied and gets absorbed into the skin without leaving that heavy and mask-like effect.  Regardless, my pores are smoothened, and any textural imperfections are blurred.  In addition to using this under makeup, it may also be tapped over makeup throughout the day to refresh!

It has been awhile since I fell in love with YSL’s base products, and am glad to have found my new favourites with YSL Le Cushion Encre de Peau and Top Secrets Instant Moisture Glow!  Do check these out if you can!