I’m always looking for interesting nail polishes, be it an interesting color or textures and finishes.  And this Fall 2014, YSL brings us the La Laque Couture Les Graines, 2 new nail polishes with textured finish to complement the rest of the Cuirs Fetiches collection. 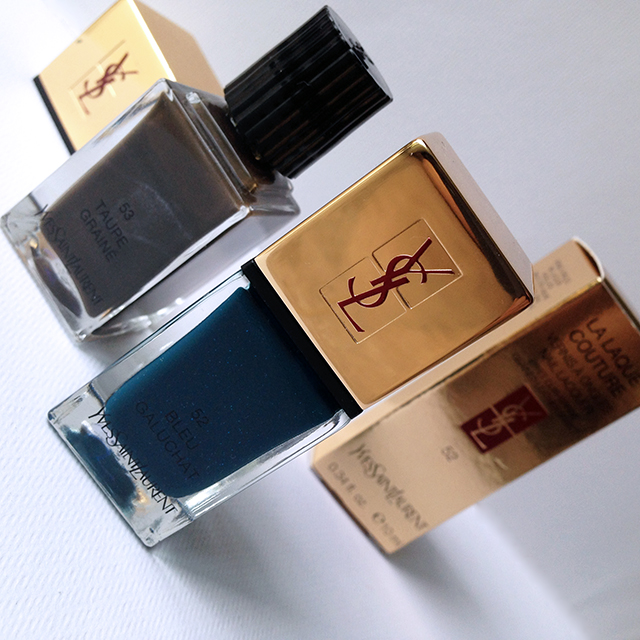 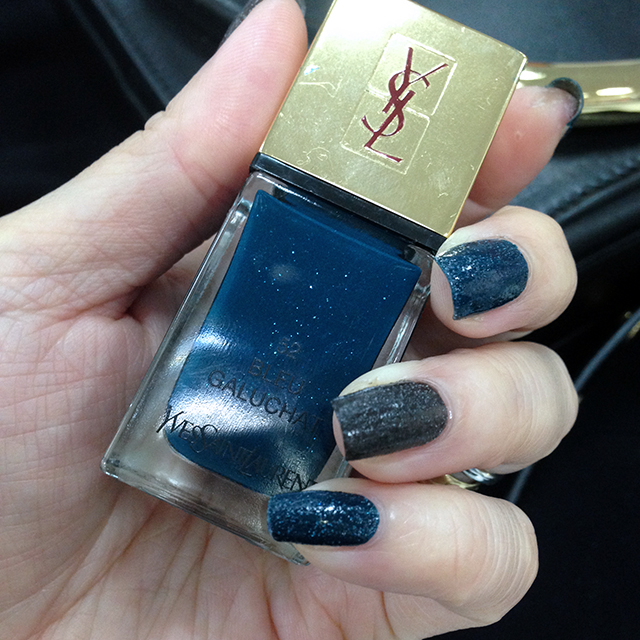 YSL La Laque Couture 52 Bleu Galuchat is a deep prussian blue.  It applies smoothly and dries down quickly, same quality as I’ve come to expect from YSL nail polishes.  The final color on the nails is identical to what it looks like in the bottle.  There are tiny specks in the bottle that resemble shimmers, but these actually dry to form the grittiness that gives the polish its texture.

The finish is as shown in the swatch above, slightly shiny on its own without requiring an additional layer of top coat. 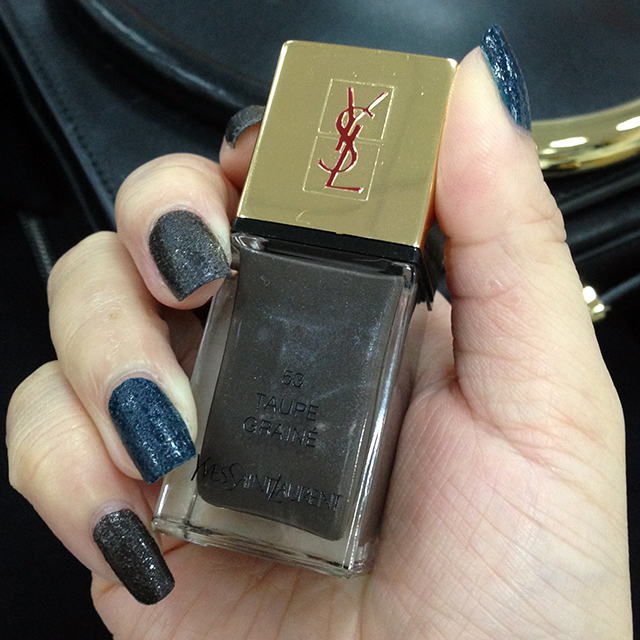 YSL La Laque Couture 53 Taupe Graine is a charcoal brown.  It did not apply as smoothly as Bleu Galuchat, and looked darker and leaned towards black on the nails than it did in the bottle.  Perhaps owing to the darkness of the shade, the texture is less obvious but still noticeable as the light hits it.  Taupe Graine is less shiny than Bleu Galuchat, and with continued wear, became more muted.

Once again, YSL manages to entice with its La Laque Couture offering.  Both Bleu Galuchat and Taupe Graine are sophisticated shades that go very well with this season’s dark nail trend.  However, for a Cuir Fetiches theme, these are not at all like leather.  Instead, they remind me of those spray on textured wall surfaces, and are rather sandy / gritty that I would advise gentle caution when wearing extremely delicate clothing.  The texture does wear down as you wear it, and this particular range of polishes seem to wear off at the edges sooner than the other offerings from YSL.

Also of note is the fact that these polishes do work with a top coat, which will enhance the shine.  However, this has to be a good old fashioned top coat and not one of the gel types.  The latter glosses over the surface too much, eliminating the texture completely.  I also tried applying one of those mattifying top coats and that does not work either.

Lastly, do bear in mind these polishes are rather difficult to remove, just like most other textured polishes, and they do stain the nails.  So a good base coat is strongly recommended.

For high end nail polishes, the short comings do give me pause for a strong recommendation.  But they are limited edition, and the colors are gorgeous.  So, do try to check them out in person if you can before making a purchase.