My take on a handful of Wayne Goss brushes

I acquired a few Wayne Goss brushes via a gf from London just to check them out and see what the fuss is all about.  Ever since then, I’ve had quite a lot of people ask me how I found the brushes, and so I thought I’d post my personal thoughts here.  I am not a brush expert in any sense of the word, and I also don’t consider myself very skilled at applying makeup, so whatever opinion I have is based entirely on my personal likes / dislikes.  Also, I don’t spend a lot of time on Youtube, and can’t really call myself an ardent fan of Wayne Goss.  So I don’t have that personal sense of affiliation that seems to have driven much of the initial craze for these brushes. 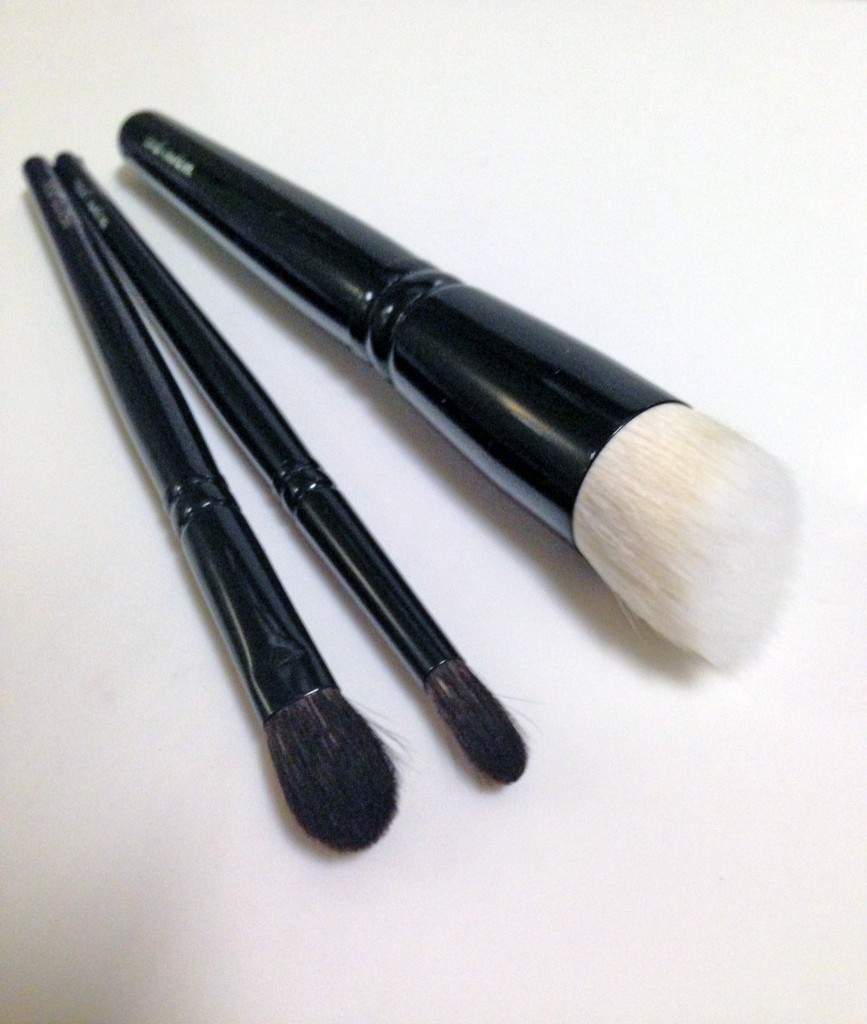 As I already have quite a few brushes, I didn’t want to invest in the entire set of Wayne Goss brushes.  Instead, I picked a few brushes that I would use frequently, and ended up with brushes 01 (foundation – I am on the hunt for a HG liquid foundation brush), 05 (small crease brush), and 06 (eyeshadow).

Wayne Goss had designed his eponymous collection of brushes to be multi-tasking.  Which is why all the brushes are simply numbered, and if you were to look up the description, you will find quite a long list of intended purposes for each brush.  Brush #01 itself is intended for foundation, cream blush, concealer, cream contour, cream sculpting, and finishing.

My very first impression when I saw this brush was, holy crap that’s a small foundation brush!  Having owned 3 foundation brushes prior to this – Sigma F80 (which was still my preferred foundation brush until the Fu-Pa 02 entered my life… more on that in a later post!), Hakuhodo S5555 and G5552 (briefly reviewed here).  And my problem with both the Hakuhodos were they were really too small and took too much time for the entire face (and I have a relatively small face!).  And then Wayne Goss 01 came and for a moment I thought it was even smaller still!  But a closer comparison showed it is the same size as G5552. 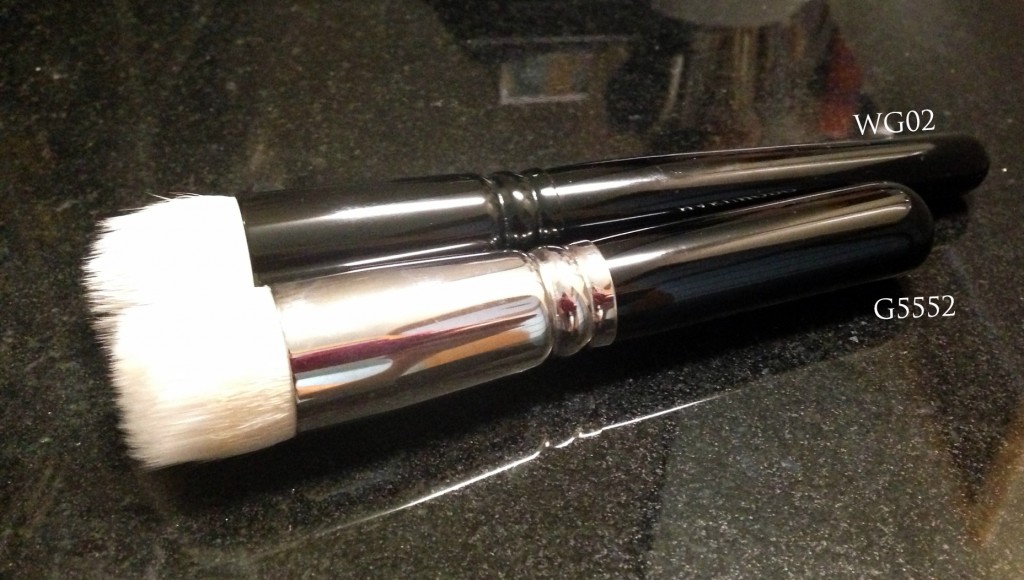 The most obvious difference between WG01 and G5552 is the length of the handle.  I personally prefer the slightly longer handle of WG01 (but it really quite standard, it is the G5552 which is diminutive).

Having used the G5552 for both foundation and cream blush (and not liking it for either purposes), I was rather apprehensive when I saw WG01.  But after using it for awhile, I realized WG01 performs quite differently! 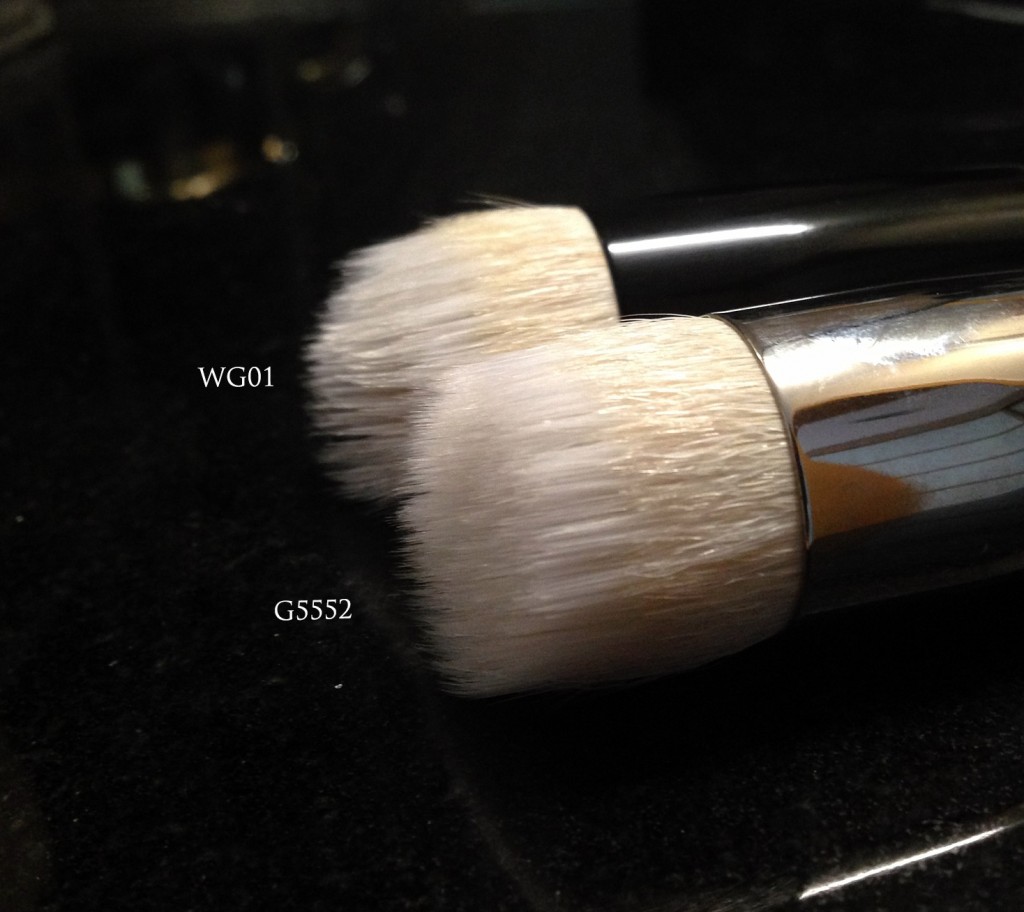 The WG01 is cut in a much more angled slope than G5552, which somehow just flows much easier over the curves of my face.  Also, I’m not sure if you can make out from the photo, but the distance between the longer synthetic fibers and the shorter goat hair is greater with the WG01, which somehow makes it easier to blend. 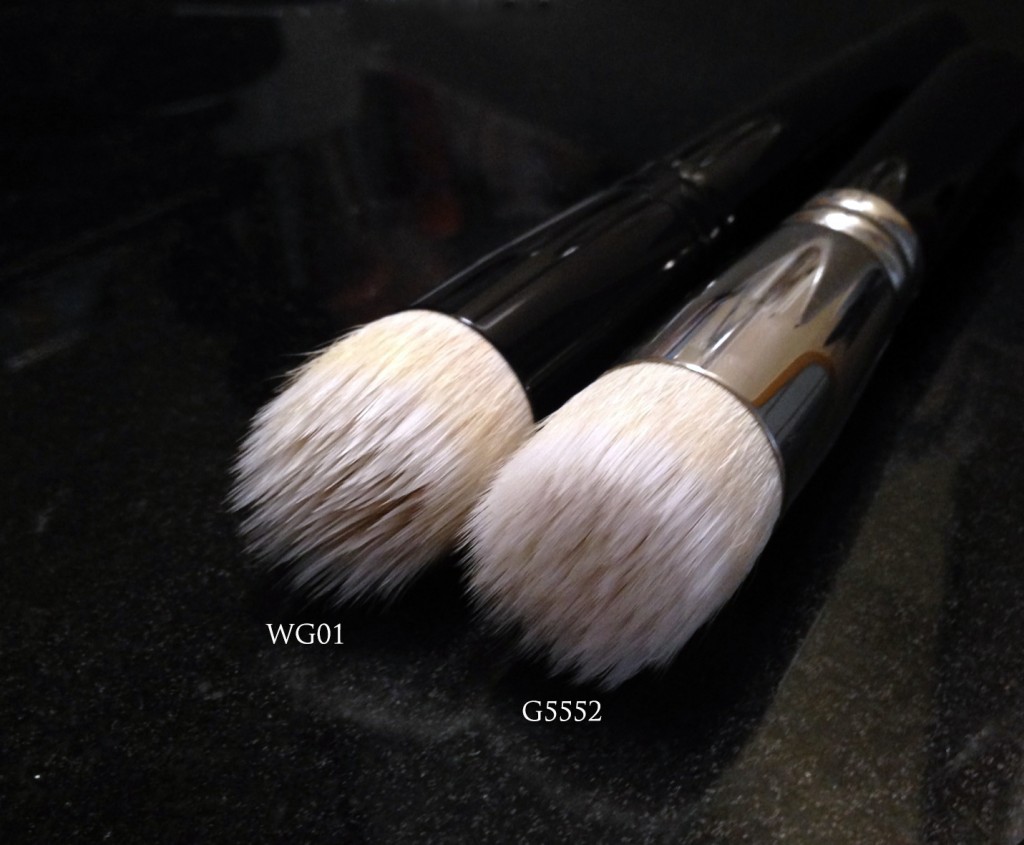 The other distinct difference is the WG01 is much less dense than any of the foundation brushes that I currently own.  Somehow it just works for a brush like this, I don’t feel like i’m scrubbing my face when I’m applying foundation.

Personally, I find this too big for concealer, and I don’t really do any “finishing” as a separate step from application instead I tend to just dab on my foundations all over my face then use a brush and buff it all over.  And since I am always running late, this WG01 is just too small for my personal preference.  It is certainly handy for getting into the sides of my nose, and around the mouth, etc… but for all over application it is too small.  Also, I like to apply my foundation in semi-circular motions (with the Sigmaa F80 I can actually do full circular motions, which I just can’t seem to do with an angled brush) which I find gives me a more air-brushed finish, and it is very hard to do with something this small.  I have had people ask me if this is the same size as the Shiseido foundation brush – I don’t own the Shiseido myself, but I have seen comparisons online showing they are the same diameter, and from handling the Shiseido myself it certainly feels very close.  However, I don’t quite get the comparison with Shiseido as that is a synthetic brush and all the bristles are of the same length – completely different in my mind.

Brush #05 is the smallest crease brush in the Wayne Goss collection.  I am increasingly fond of tapered brushes like this as my eye area is quite small, and this allows me to place colors more precisely than a flat brush.  However, the tip is not that sharp so it will not give you defined edges if you are looking for a sharp cateye.  It is quite dense and picks up colors beautifully, and is soft yet resilient to make this quite a multi-purpose all-over eye brush.

At the moment, I only own 2 other tapered brushes – the Hakuhodo S142 (briefly reviewed here) and a Hakuhodo Kokutan Lip brush which I have adapted for using on the outer corners of my eye (don’t laugh, i LOVE it!). 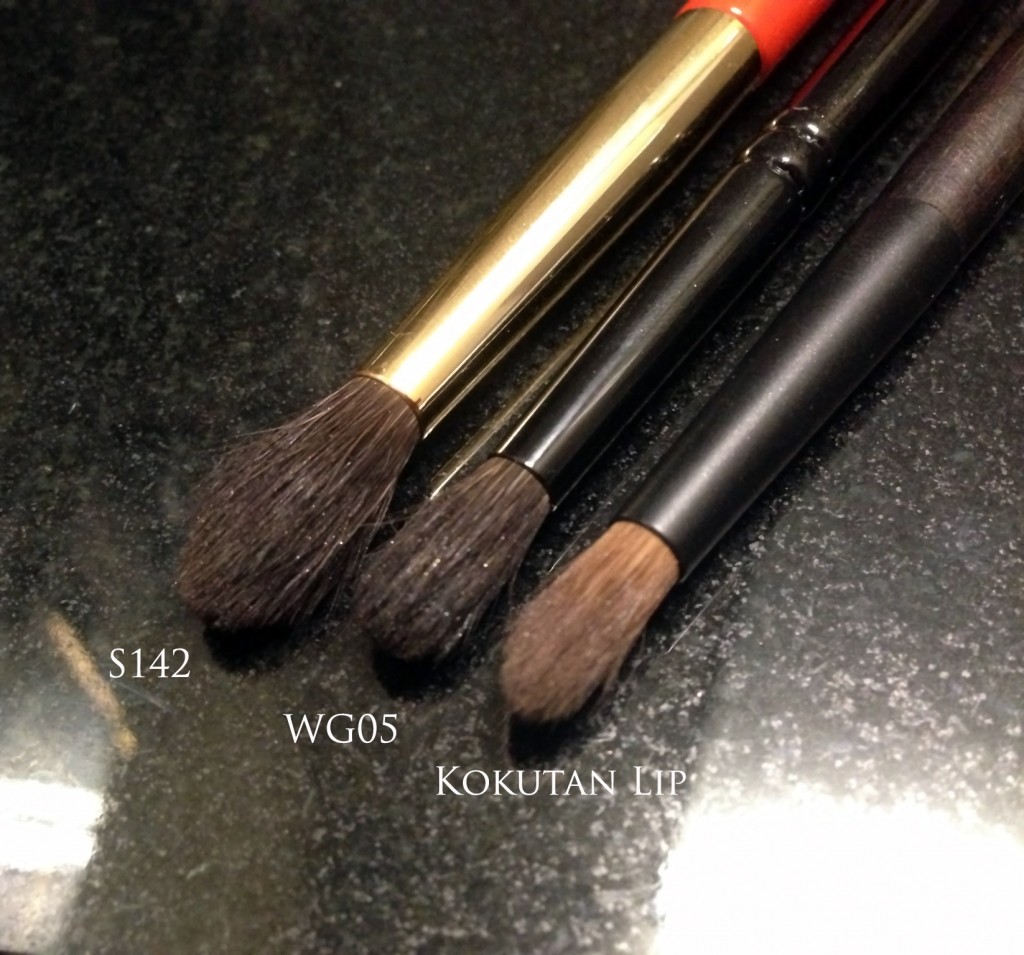 I didn’t compare the lengths of the handles as they were all roughly the same, with the Kokutan Lip being slightly shorter.  It really doesn’t bother me a whole lot, unless it is unusually long which the WG05 isn’t.

But in terms of shape, the WG05 is actually more “blunt” at the tip than either the S142 or Kokutan Lip, which makes it slightly less precise.  However, the width of the ferrule is narrower, and the hair length is shorter than the S142, which gives better control over a small area.

The blue squirrel hair gives the WG05 a silky feel, similar to the S142, and surpassing the Kokutan Lip (weasel).  But it is more resilient than the S142, although not as firm as Kokutan Lip, which is just about right for me.

Wayne Goss #06 is perhaps the most versatile brush in the whole bunch.  I was feeling lazy today, and completed an entire eye look using just this brush (except for lining which I simply can’t do except with the tiniest of brushes!).

I actually own quite a number of eyeshadow brushes now (somehow I just didn’t have enough, and then sudden boom!), but when I tried to compare them side-by-side or just based on my own usage preferences, only the Hakuhodo B133 (briefly reviewed here) comes close. 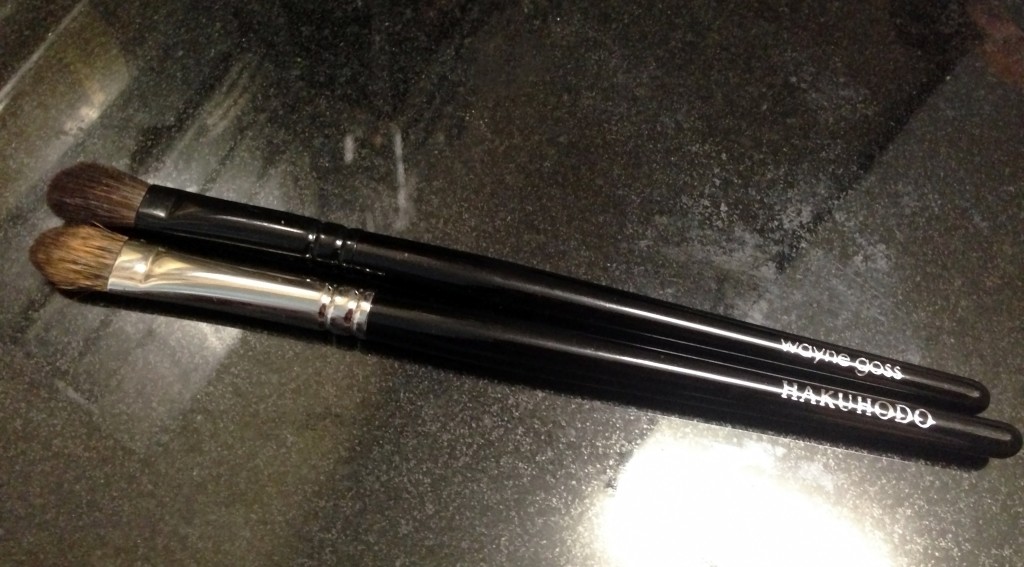 As you can see, both brushes have similar hair length and shape (the B133 is more rounded than WG06), and even the handles are similar length (B133 is just slightly longer but I found WG06 to be slightly more comfortable in my thief’s hands). 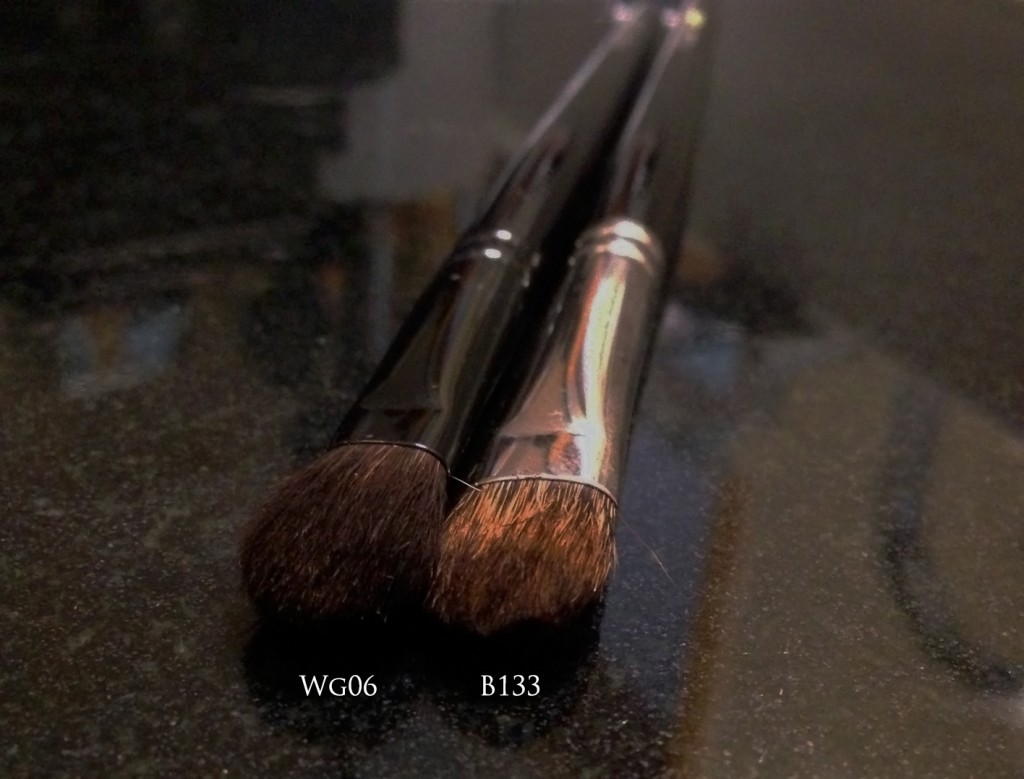 The WG06 is thicker (fluffier), whilst the B133 is wider and more dense.  And this somehow makes the difference for me, allowing me to use the WG06 for laying down base color (a task that it excels at better than the thinner B133), work on my inner lid, as well as the outer corner (impossible with the wider B133).  Regardless, it is still not able to give precise edges.

WG06 is certainly very soft on my lids, but somehow it doesn’t feel quite as silky as B133 (Canadian squirrel).  It is also slightly less resilient, although I think both have its own merits.

For a first time collection, and for the fact that these are OEM (he had to get them made by 3rd-party manufacturers in Japan), I have to say these Wayne Goss brushes are quite impressive.  However, they are not cheap, and are priced similar (if not slightly more expensive) than the Hakuhodos that I’ve referenced here.  Also, in terms of quality, I do find they are not quite as consistent and top notch as Hakuhodos (and all the other brushes that I own – a lot of Koyudos, 1 LSY, etc).  As you can see from the pictures above, there are stray hairs in all the WG brushes (the very first picture at the top of this post was taken before the 1st wash and already there were strays!), and the handle and ferrule materials just don’t feel as sturdy as the Hakuhodos.

These brushes are all extremely popular, and are always snapped up the moment a new batch is released.  If you are interested, do check them out at either Beautylish (US) or Love Make Up (UK) – both instock now!

Take a Step Forward in Caring for…