It’s that time of the year again, when we makeup lovers must make that impossible decision and choose our beaus.  Tom Ford has launched 25 new shades for its annual Lips and Boys collection, and returned 25 hot ones from previous years. These are highly covetable pocket-friendly miniature lipsticks from the luxury brand (0.07 oz/ 2.07 mL vs. 0.1 oz/3mL for the regular size), and limited edition hues that cannot be found anywhere else! 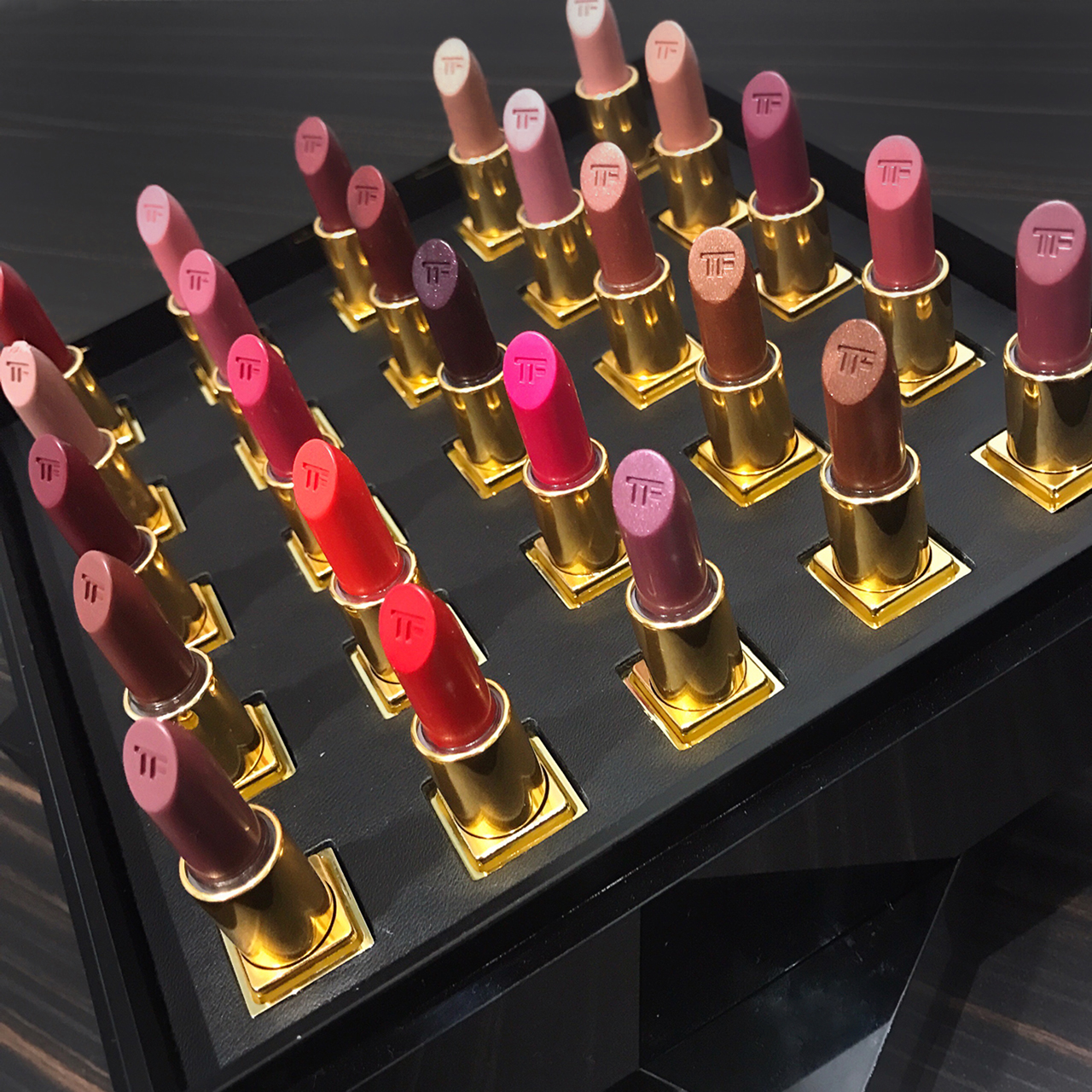 This year’s Tom Ford Lips & Boys feature 5 cream finish lipsticks, 10 metallics, and 10 matte.  The hues seem to fall mostly in the purple – brown spectrum, although there are occasional pops of red and pink.  There are plenty of nudes and modern variations of neutrals to choose from, and here are the complete swatches! 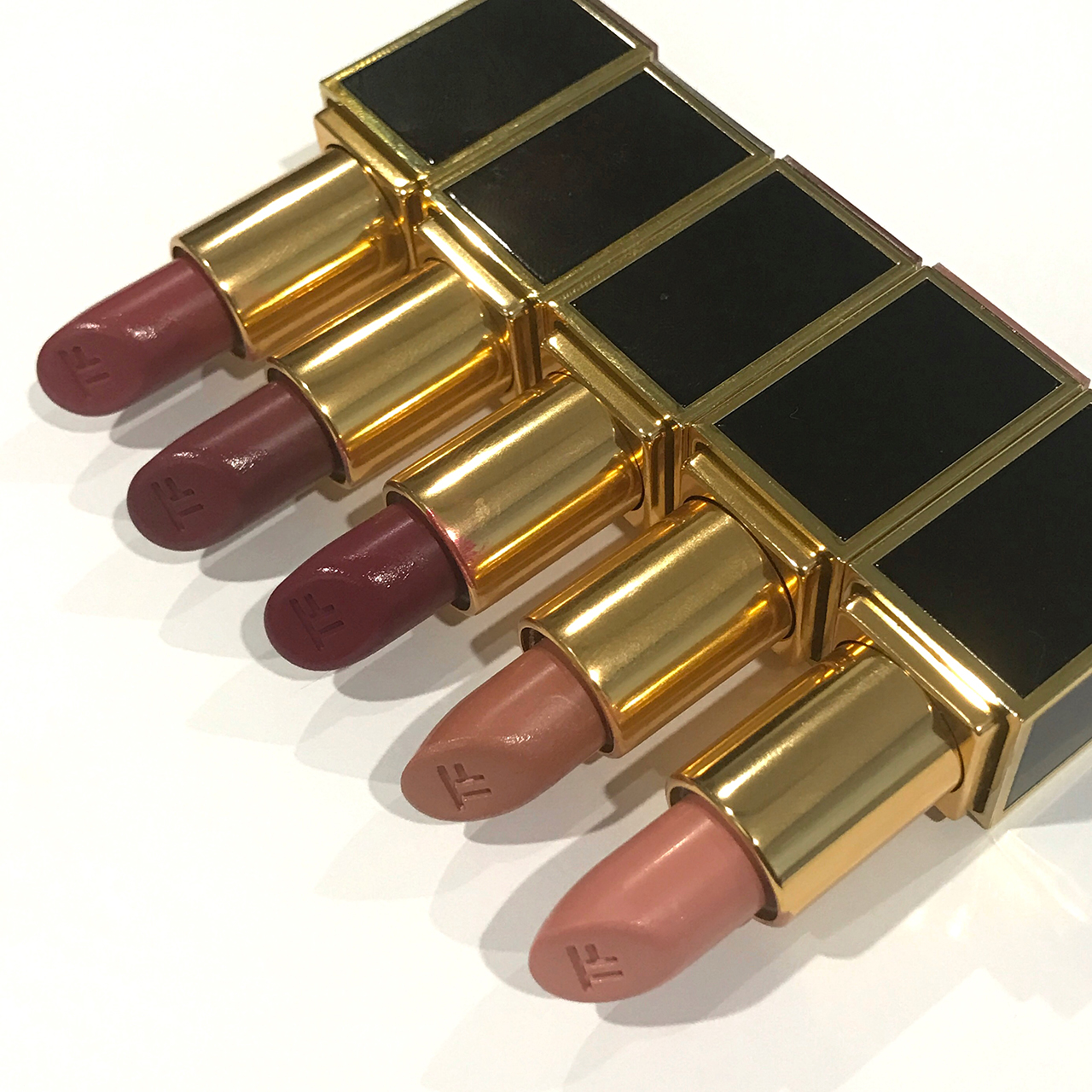 There are 5 new cream lipsticks, in that classic cult-favourite formula that has won over so many fans.  Smooth, well pigmented, good coverage…. you name it.  The 5 new shades in running order are Alexander (bottom right), Bradley, Jack, Michell and Ashton (top left).

Here are the swatches:

The interesting thing about these new creams is that they all seem to pack some element of shimmers, although in fairly conservative amount.  They are all richly saturated with color, and the shimmers only provide a touch of dimension and shine without being too obtrusive.  The only exception is Alexander which has a touch more shimmer to it, but it works for that light pink shade, transforming it from being too nude. 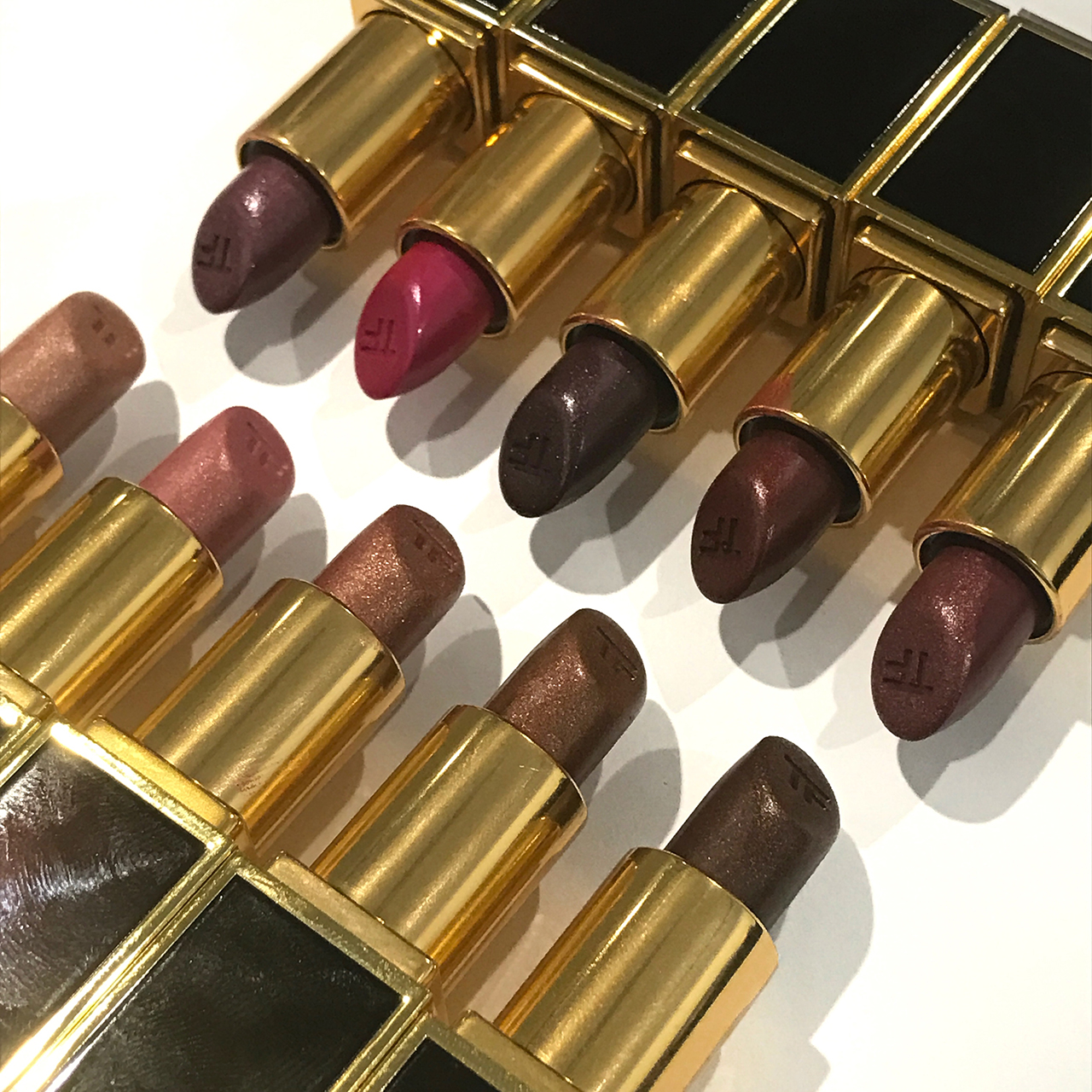 There are 10 new metallic lip colors in this year’s Lips and Boys, and they’re all surprisingly wearable.  From left to right, the top row features – Elliott, Logan, Jon, Inigo and Ryan.  And the bottom row are – Travis, Aaron, Snowdon, Douglas and Graham.  The swatches are below.

I want every one of the 5 shown here!!  All the shades pull purple against my skin tone, which is a real stroke of luck.  As with previous metallics, these tended to sheer out and are much more wearable and less goth than it appears in the tube.  The only exception is Logan whach packs a healthy dose of intensity, and is a stunningly brilliant fuchsia!

I consider this next group of metallics as modern neutrals.  Personally, I’ve always found brown lipsticks to be rather dated, especially if they are full on opaque and dark.  Travis is an interesting way to wear such a dark hue, and is in fact a very elegant and sophisticated shade!  Snowdon is one of the crowd favorites this year, and a wearable everyday staple! 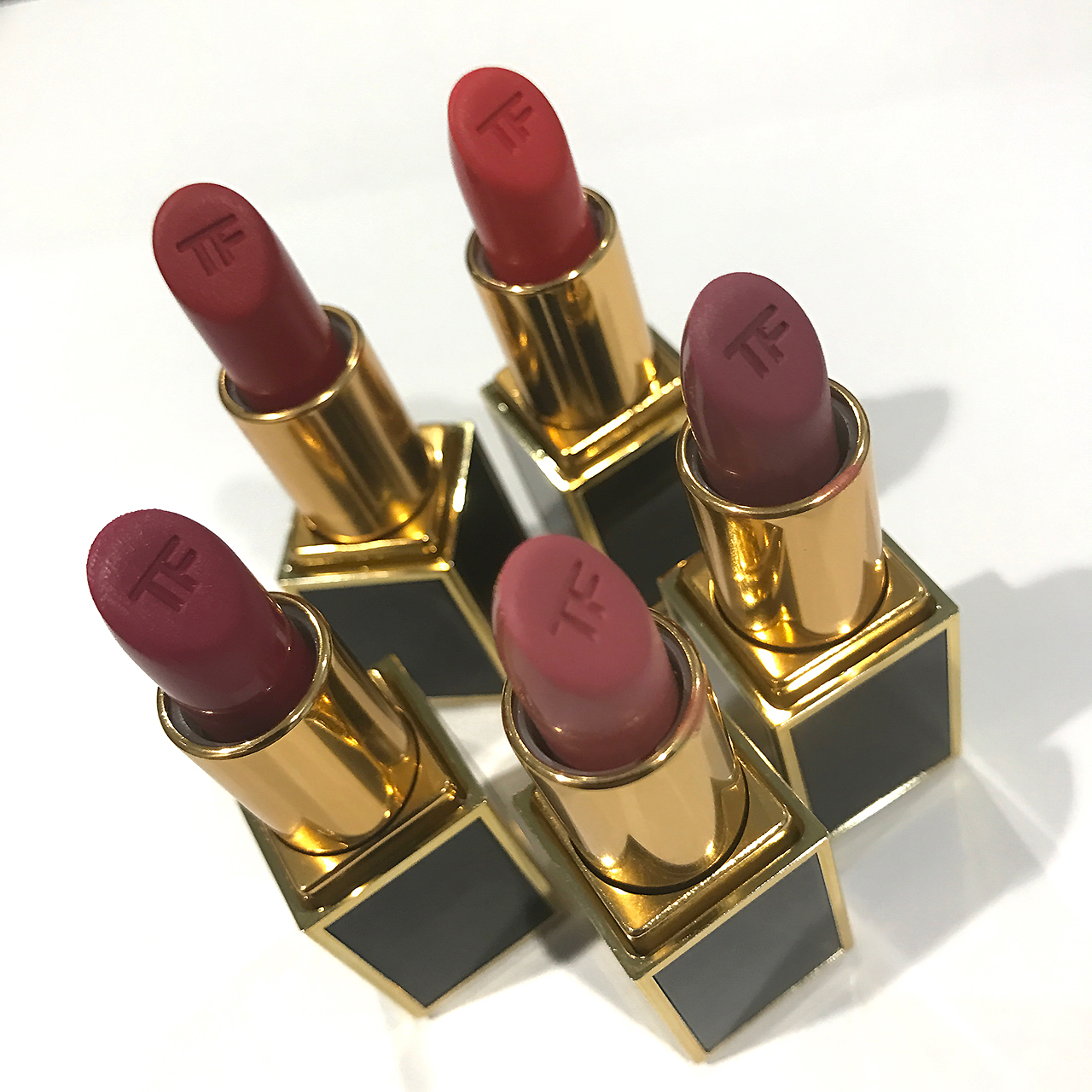 This year’s Lips and Boys feature 10 brand new matte lip colors, which is where I suspect many would gravitate towards.  I love Tom Ford’s matte formula, and so far there had only been 8 of them ever introduced, so these 10 are very special indeed.  Pictured in clockwise direction, starting from the top, are – Christiano, Thomas, Anderson, Jared, and Dylan.  Here are the swatches:

There are some lovely pinks and reds here for variety, and I think all of them are very wearable.  Personally, I am very drawn to Jared and Thomas, which is a direction I’ve been gravitating towards all year! 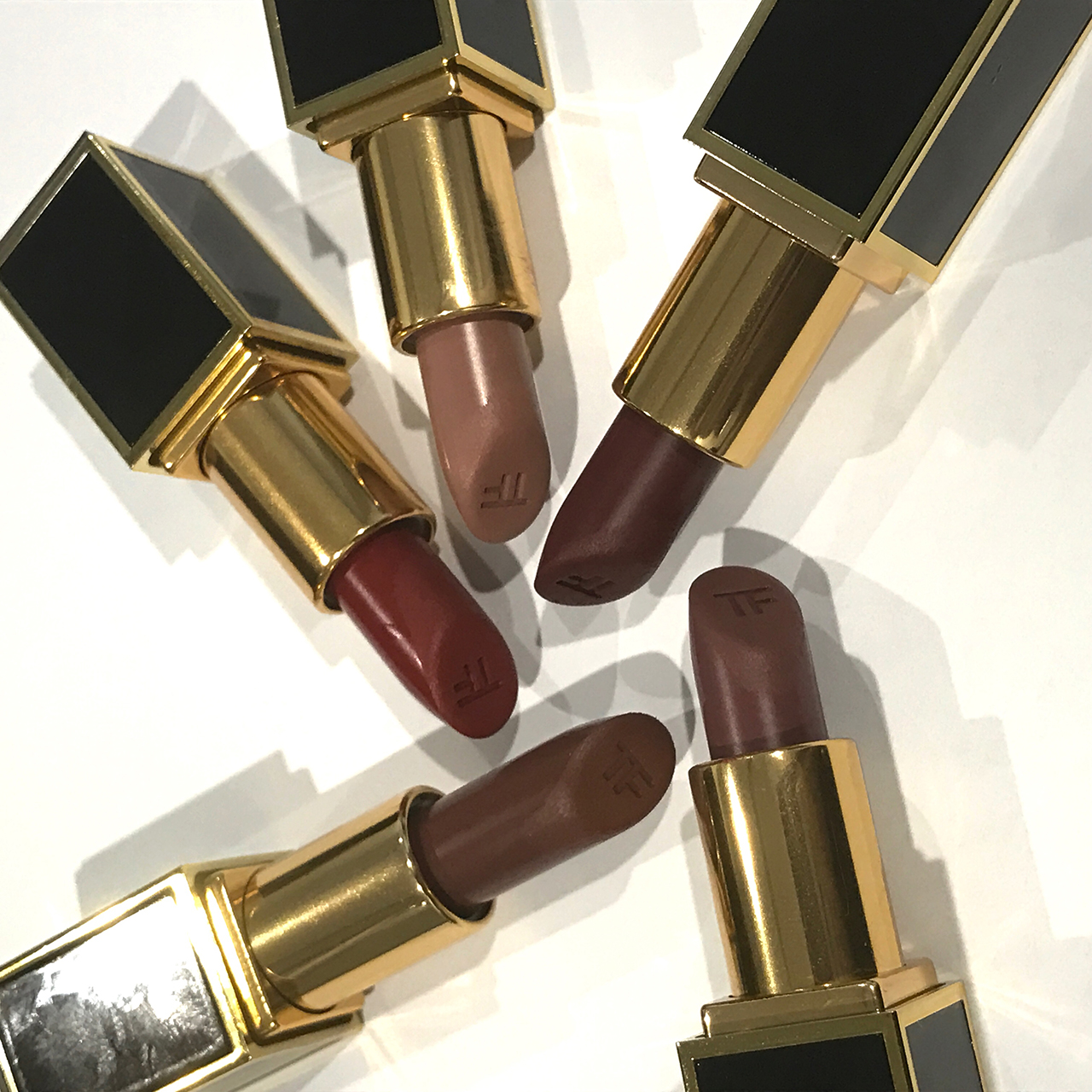 The last 5 in this year’s Lips and Boys Collection are also matte.  I love how smooth and creamy they are, and they don’t leave my lips parched and wrinkled at the end of the day.  Pictured above in clockwise direction, starting from bottom right corner, are – Christopher, Nicholas, Evan, Dominic, and Ben.

I was surprisingly pleased to see how these turned out when swatched, because despite looking so dark and foreboding in the tube, they all turned out to be really wearable shades!  Ben manages to tread that precipice of dowdy opaque browns by packing some hints of red and yellow undertone to make it interesting, but could be a little too warm for some.  On the other hand, Christopher is one that I would wear in a heart beat, as with Dominic and Nicholas!

The Tom Ford Lips and Boys 2016 Collection is out in stores now!  They retail for SGD50 each, and there is a beautiful collectible box that comes free with every 3 of these lipsticks purchased.  For the true collector, there is also a specialty trove that contains all 50 lipsticks available in very limited quantity.  I’d rather wish they produced a 25-piece set for sale though, with just the new shades from this year.

So tell me, which of these Boys have caught your eye?!