Before Summer fades into Fall, I really need to show you a few more items that I’ve been meaning to discuss for a really long time!  I picked up a couple of THREE Pressed Eye Color Palette Duos when I was in Bangkok, Thailand last year, and one of them is this very interesting bronze and lime palette named Love Evolution! 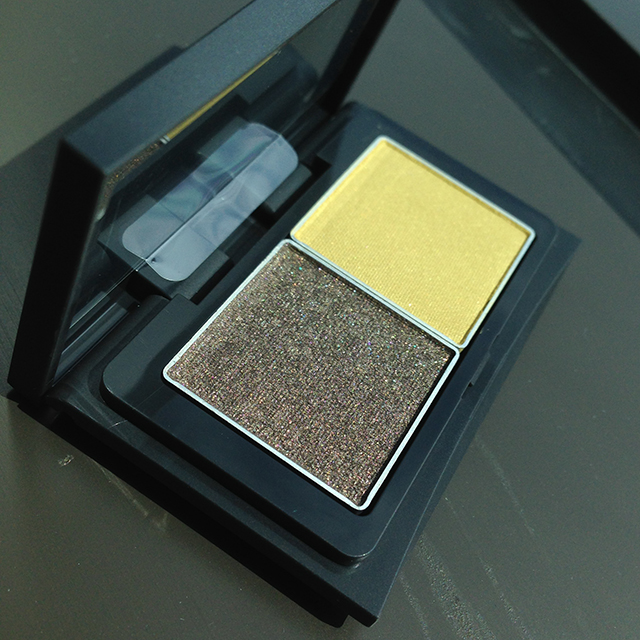 One of the specialities of the THREE Cosmetics line is their cream eyeshadows pressed into a palette.  These creams are unlike the mousse-y ones like Chanel Illusion d’Ombre, nor are they dense and creamy like the Tom Ford cream eyeshadows.  Instead, these are sort of hybrid gel-powder and have a silky texture that set to powder.  When these were launched, many years ago, they were much lauded because of the complexity of those shimmers.  And when I first tried these out at the beginning of this blog, I had given my fair share of raves.  However, years on now, I find myself in a very different place.  Before we get into that, let’s take a closer look at Love Evolution in all its glory. 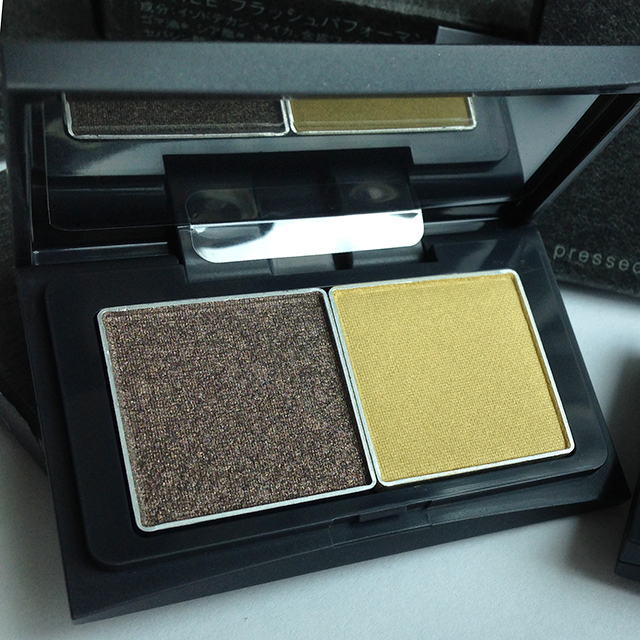 On the left is an antique brown cream shade filled with all sorts of multicoloured micro-shimmers, and on the right is a powder eyeshadow in a very interesting muddied-yellow that turns a muted lime under sunlight.  Although you cannot quite see it from the pan, the muddied lime-yellow also contains some amounts of shimmer which I will show you soon in a swatch.  But first, here is an off-focus shot to show you the glorious shimmers in the cream shade! 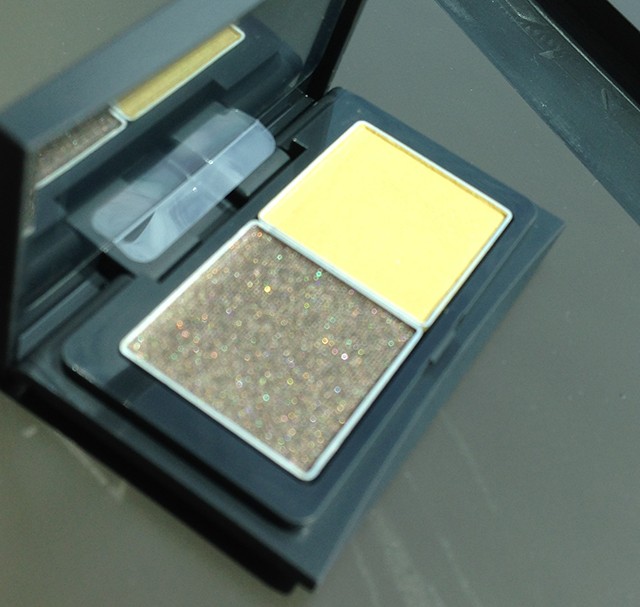 See what I meant about the muddy yellow turning lime under sunlight?!  And check out those shimmers!!  Oh be still my beating heart…!

And as promised, some swatches: 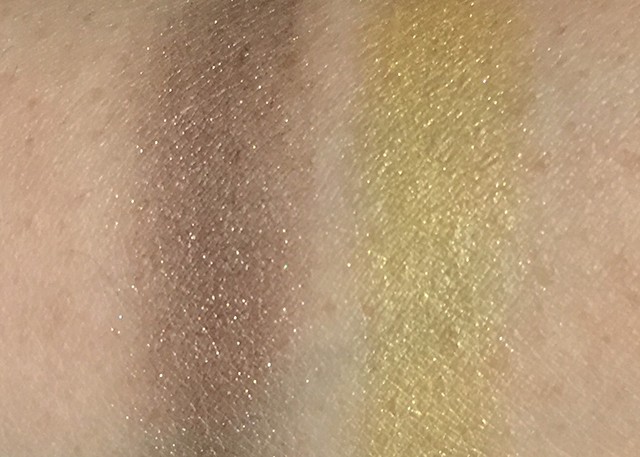 On my skin, the cream shade actually pulls reddish bronze and despite having a fair sprinkling of golden shimmers, it manages to remain neutral- to cool-toned instead of warming up.  And the powder shade is most definitely lime against my skin, and the sprinkles show up quite well.

And another shot from an angle to give you a better perspective: 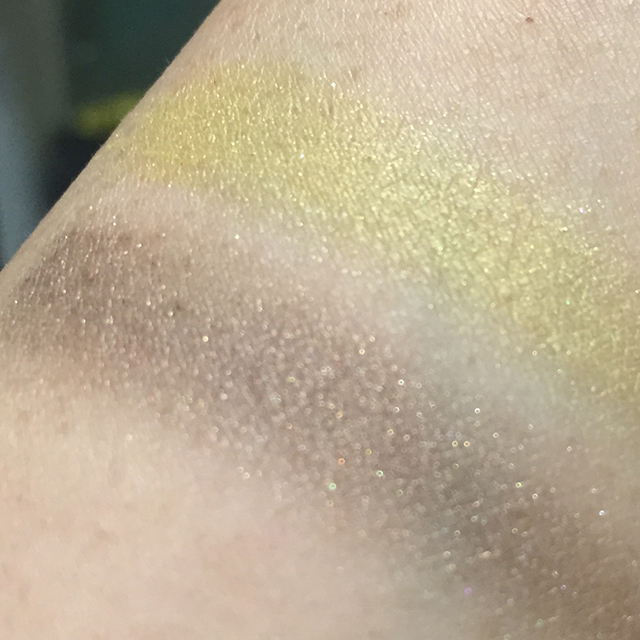 Now with something as exceptional as Love Evolution, one should have some high expectations.  But my personal disappointment comes from the cream shade being all but impossible to pick up properly with a brush.  The swatches above are made with a finger, and even then there is clearly some sheer-ness to the cream shade.  With a brush, it takes plenty of patience to build up sufficiently for the color to show up, and even when it does, the shimmers all get “eaten” up by the brush.  The powder shade on the other hand, is quite pigmented and should be approached with a light touch.  The 2 shades are meant to be used layered over each other, although you are free to use them singly as desired.  Here is how Love Evolution looks on my eyes when layered powder over cream: 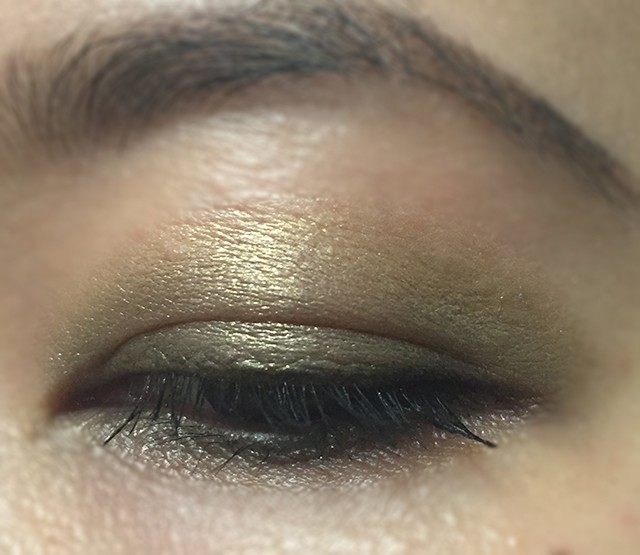 For the eye look above, I had applied the cream shade from lash line up to mid-lid, and then layered the powder shade over and up to my socket.  Thereafter, I dabbed on more of the cream shade to the outer corner and lined my lash line with a bronze pencil liner. 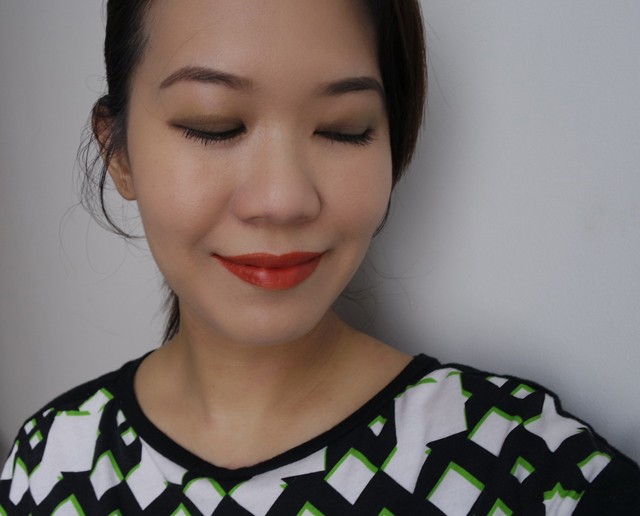 Granted end result is probably not terrible, and is in fact quite wearable, but I am disappointed because… where did all those gorgeous complex shimmers go??  And the worst part is, the cream shadow does not actually set, and does move about as the day progresses.  For my hooded lids, it tended to settle into the tiny eye fold and smudge the rest of the eye makeup even when worn with a primer underneath.

Overall, THREE Pressed Eye Color Palette Duo 05 Love Evolution had all the right ingredients to become a truly phenomenal eyeshadow duo.  Unfortunately, the cream shade just did not live up to my expectations and did not perform well on my lids.

Have you tried these cream eyeshadow palettes from THREE before?