François Nars’ decision to pay homage to Guy Bourdin for his Holiday 2013 collection has evoked much controversy since the announcement.  Many beauty bloggers have taken the stance of not reviewing this collection in its entirety in protest against the theme of violence against women which is often depicted in Guy Bourdin’s works.  Myself, I’m no expert on Guy Bourdin’s body of work, and I never did complete my Masters from Sotheby’s (due to a lack of time & severe disagreement with the Institute’s administration), but I have been exposed to enough to know that no art controversy is ever as simplistic as meets the eye.

So, before I delve into the product review, I would like to spend a bit of time discussing the issue at hand as I see it.  Please feel free to skip forward if you’re really not fussed about Guy Bourdin and are (like me) interested only in the makeup! 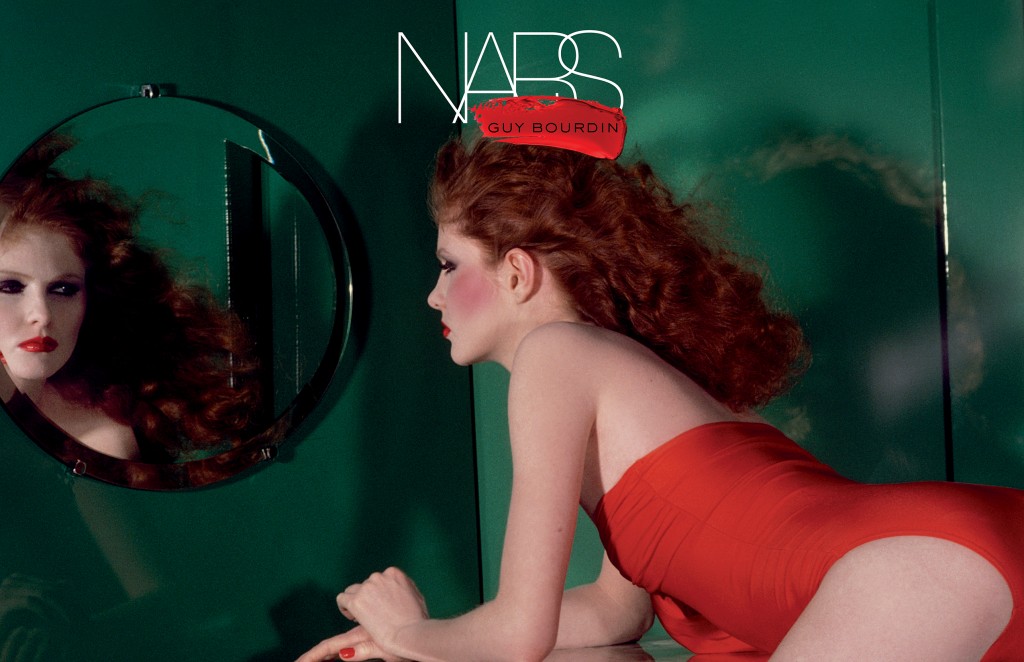 Throughout his childhood, François Nars has been a fan of Guy Bourdin’s work.  In an interview with Harvey Nichols, François Nars declared that Bourdin’s influence is everywhere in his life, “it’s in the DNA of NARS”. Since launching his namesake collection in 1994, Nars has honored the late photographer through palette colors, shade names and advertising campaigns; and it was a matter of time before that he created an entire collection inspired by some of his favorite Bourdin shots.  It is therefore ironic, in my personal opinion, to dismiss a makeup brand for embracing the very things that it was founded upon – i.e., the unique bold colors, extreme sophistication mixed with provocative sexuality. 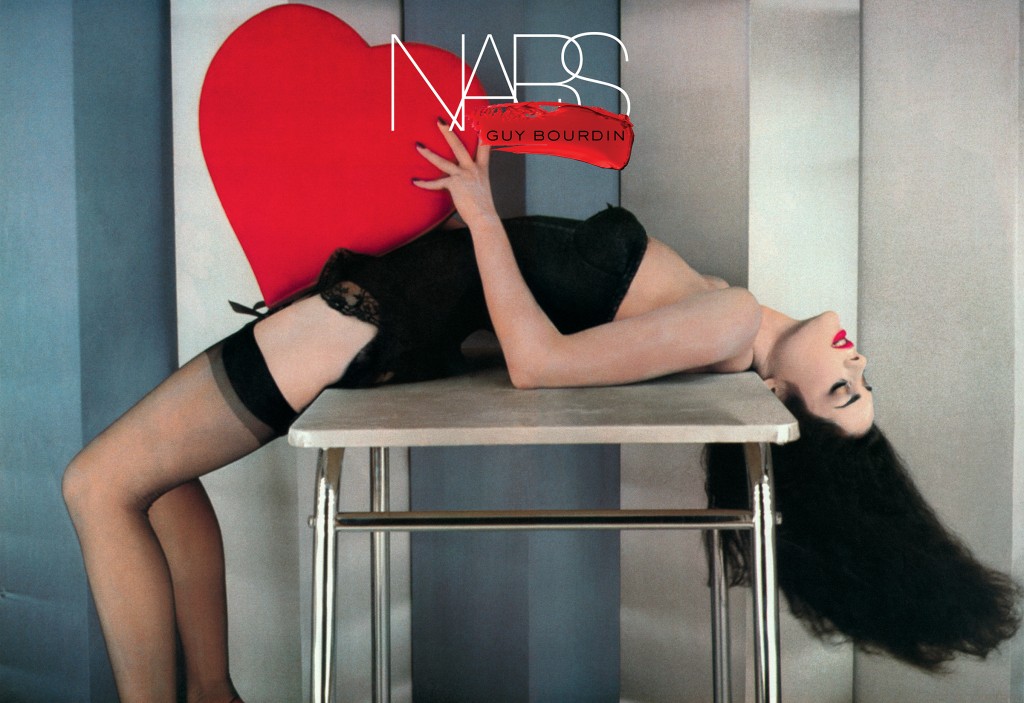 Guy Bourdin’s fame was built on his daring, turning fashion photography into entire cinematic shoots, and strong emphasis on the beauty looks for his works.  He single-handedly revolutionized fashion photography from staid product-centric posters of the 1950s, swinging the opposite extreme to strong pictorials with its own vivid narratives.  In his glossy pulp-crime world, Bourdin depicted women in handcuffs, hung, drowned, tied to train tracks and crushed by sedans.  They are often left anonymous, with faces cropped, leaving behind only beautiful clothes and shoes.  Is this violent?  Most certainly, as are movies by Quentin Tarantino, most of French cinema, and even our local beloved Channel 8 family sitcoms. 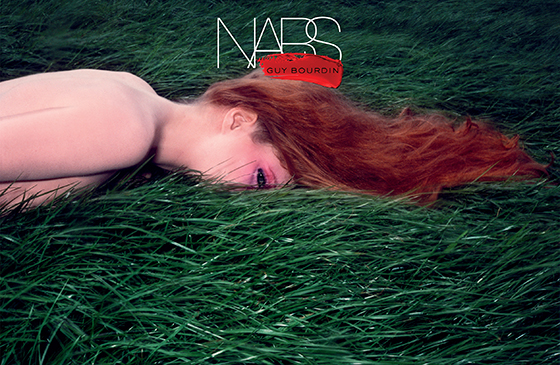 To dismiss an entire body of work based on such strong imagery, is the equivalent of dismissing most of our art history – the Gothics and Byzantines with their strong focus on death and crucifixion, the Baroques that romanticized death and suffering, etc.  It is important to put Guy Bourdin in the context of his generation, which is the post WWII era flush with massive consumerism, the influence of surrealists and the emergence of pop art.  In his own chosen subject of fashion, Bourdin has managed to evoke social commentary on self identity, sexuality, life and death; as much as Warhol has in his era, and Damien Hirst and Tracey Emin of our generation. 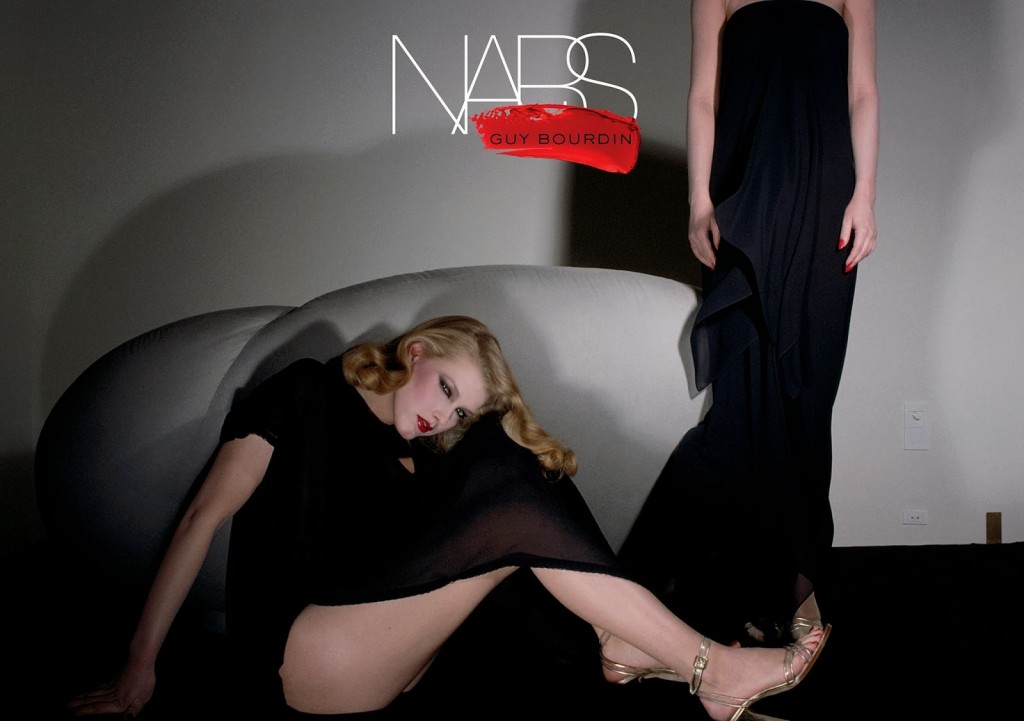 Am I a fan of Guy Bourdin’s works now?  I like some of them… but some, I find a bit vulgar for my tastes.  But interestingly, I now have a much better understanding of why NARS (the brand) has the colors and the names!

And drawing inspiration from Guy Bourdin’s oeuvre, NARS’ Holiday 2013 collection packs mega-wattage punches that will turn the ordinary woman (aka ME) into screen goddess! 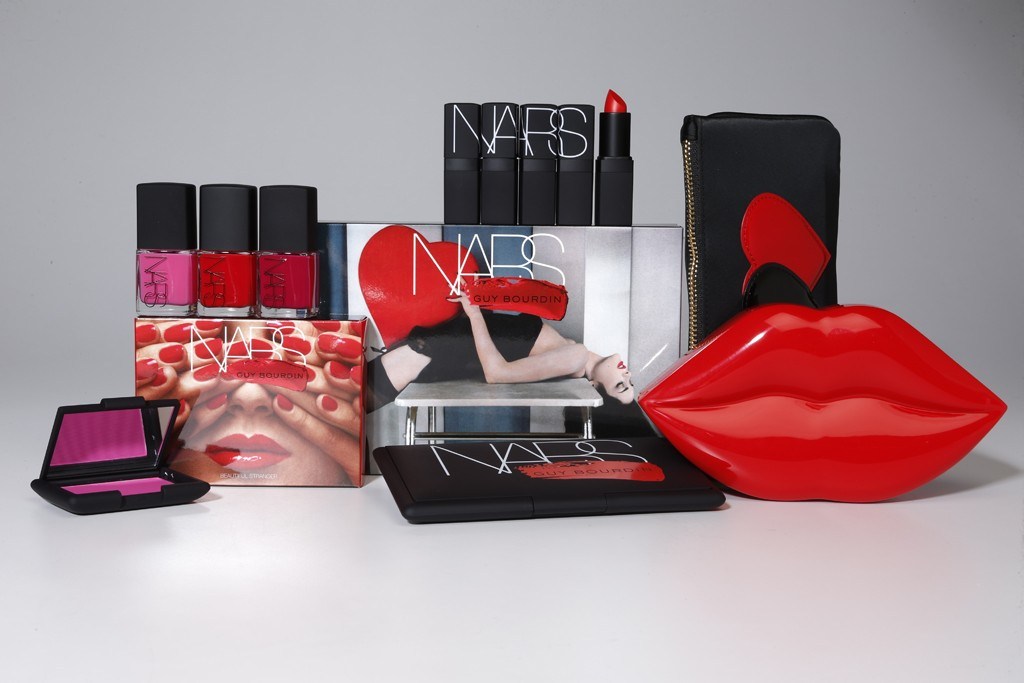 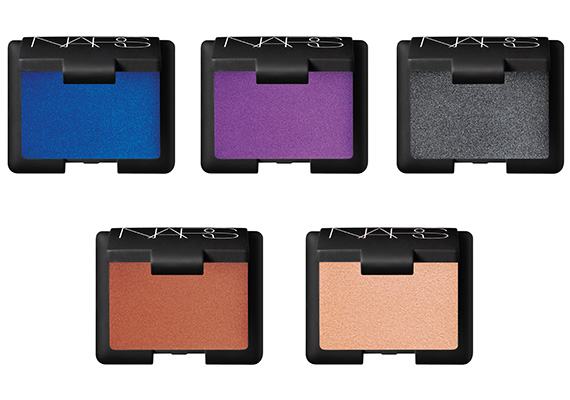 The Cinematic eyeshadows are supposedly made with a new formulation, and they truly feel out-of-this-world buttery soft yet beautifully pigmented.  But when I asked the NARS SA at TANGS, she gave me a puzzled what-are-you-talking-about look.  After being sorely disappointed by the FW 2013 releases (reviewed here), I was blown away and felt like I had just been run over by a train… like what magic is this?!?? 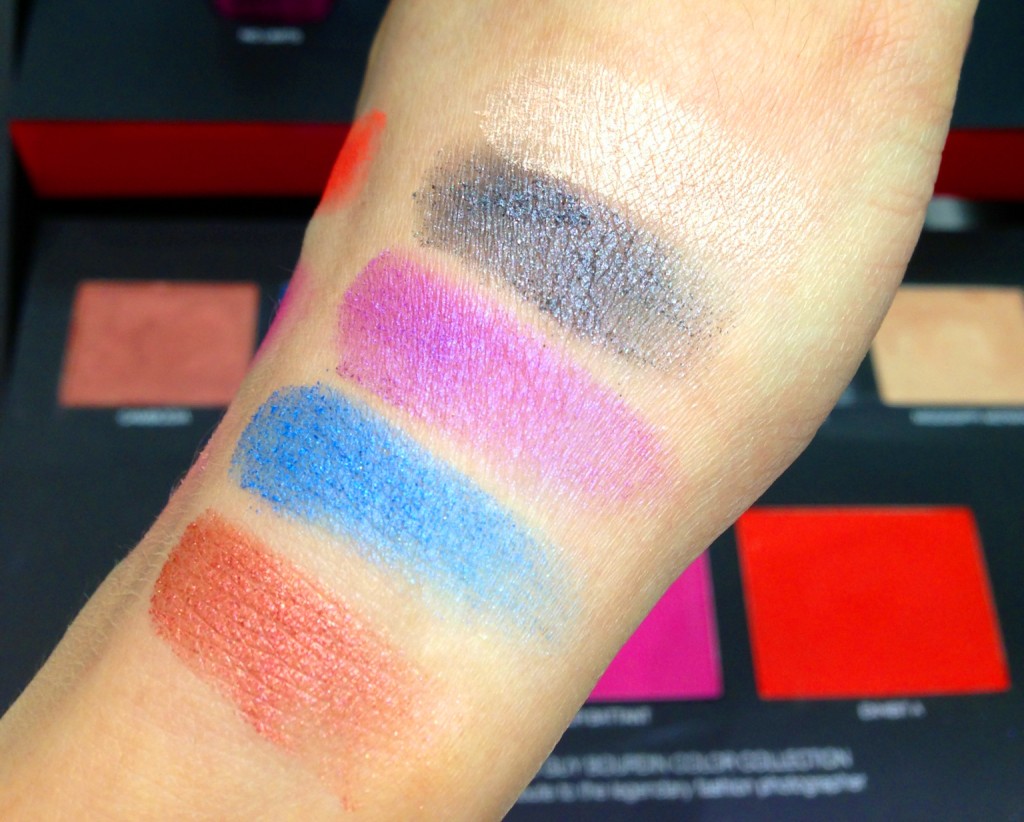 From top to bottom:

Mississippi Mermaid – shimmery ivory.  This felt warm-toned on me.

Rage – shimmery medium purple.  This is almost a dupe for Parfait Amour on Shiseido’s Eye Color Bar (reviewed here), but this leans a bit more pink, whilst Parfait Amour leans more towards eggplant.  However, both have been described as orchid purple.

Wishful Thinking – shimmery macaw blue.  This is almost identical dupe for Curacao on Shiseido’s Eye Color bar, but has slightly more depth to it.  I am madly in love with this shade!!!  But when I swatched all of the shades again a 2nd time, I found Wishful Thinking to be just slightly drier than the rests (but still very very creamy to the touch!).

Cambodia – shimmery russet red with some pink micro-glitter.  I had initially thought that this would be a dupe for Cassis on Shiseido’s Eye Color Bar, but the micro-glitter lends it greater complexity, and it is actually more brown whereas Cassis is a more maroon.

These are all incredibly smooth and moisturizing on my lips.  I love that they pack quite a bit of color in them, but they are somewhat on the sheer side and allows your natural lip color to still show through.  I already have most of these colors in my collection from other brands (especially reds and pinks!) so I didn’t pick any up for myself, but 2 of the shades have already sold out and are not swatched here. 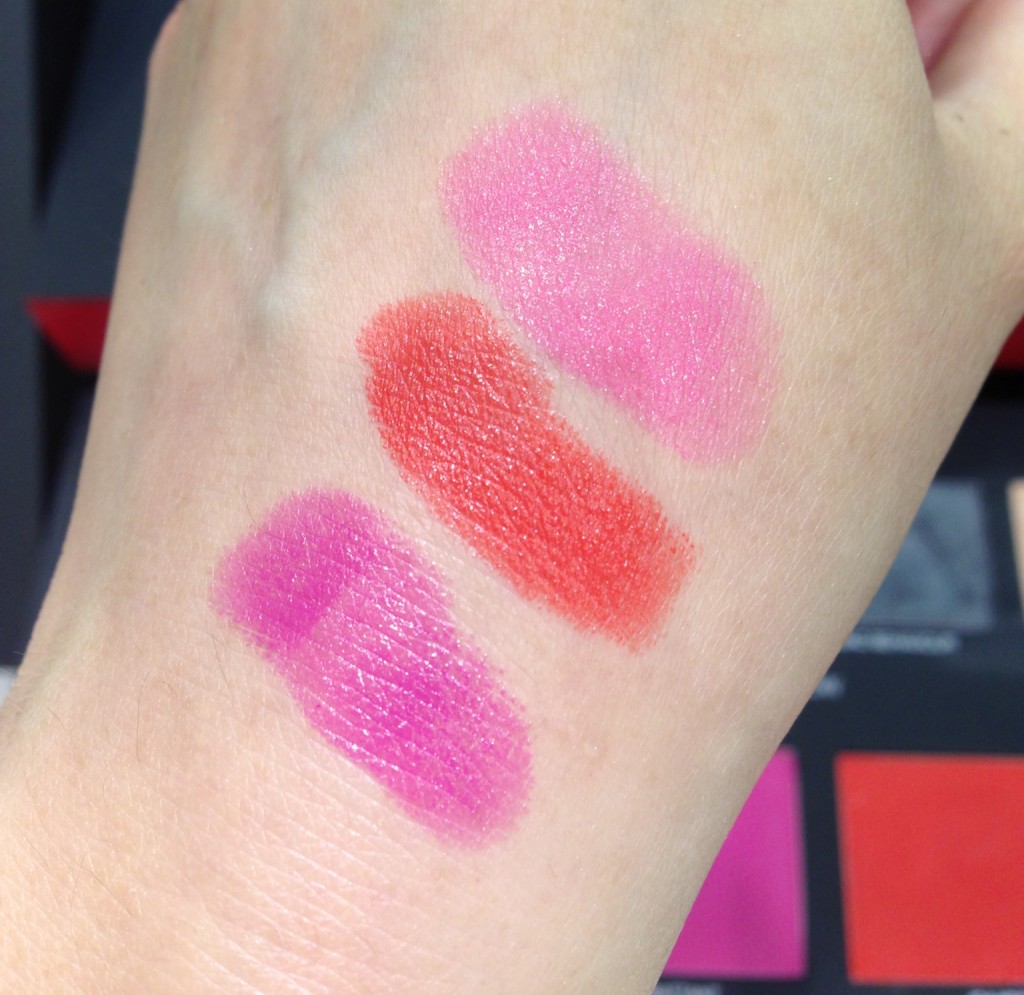 The shades as swatched from top to bottom: 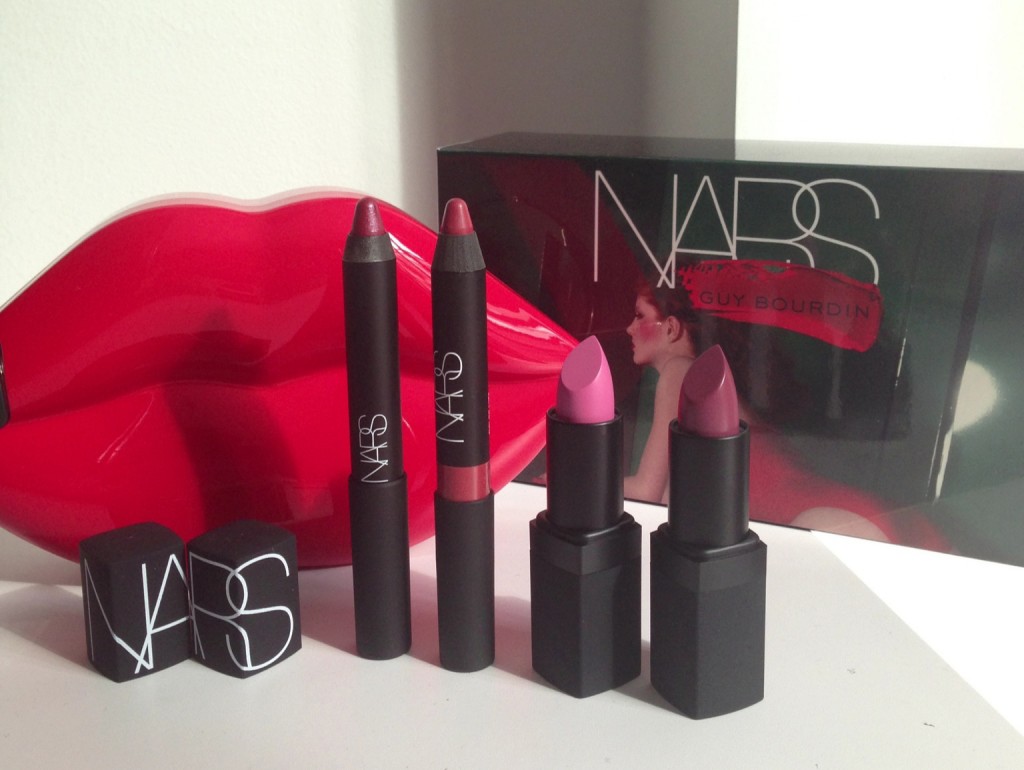 I’ll be blatantly superficial and admit that the bright red plastic lip-shaped case was the hook that caught my attention for this entire collection.  It is the perfect introduction to NARS lip products for the beginner as it consists of 2 lip pencils of different finishes, and 2 neutral lipsticks.  The colors are all easy to use, everyday shades, and are specifically chosen to layer over each other. 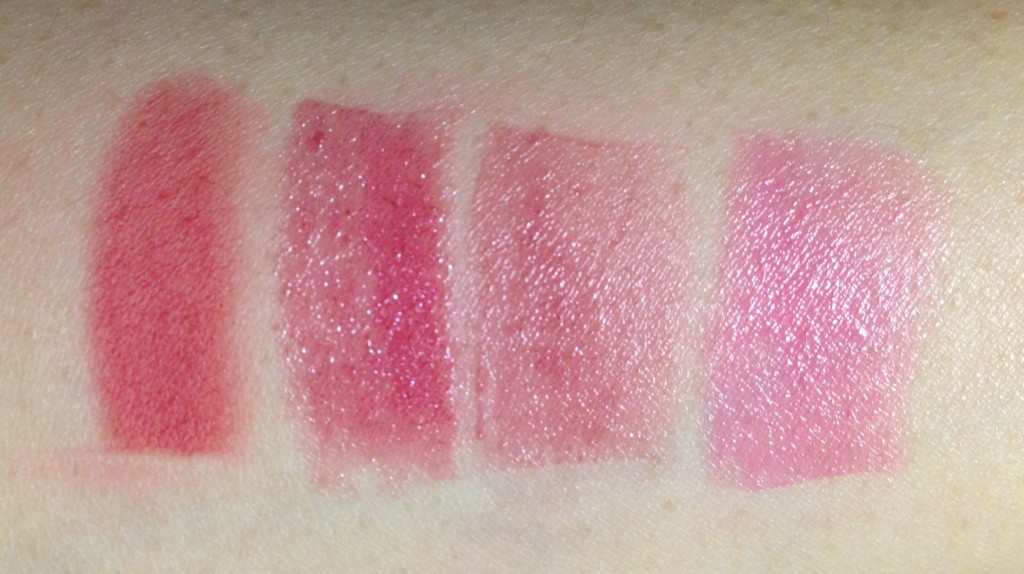 The shades, from left to right:

Damage (Lipstick) is a sheer, muted light mauve with neutral to cool undertones and a glossy finish

Roman Holiday (Lipstick) is a sheer, cool-toned, light pink with a glossy finish

All are miniatures of items from the permanent range. 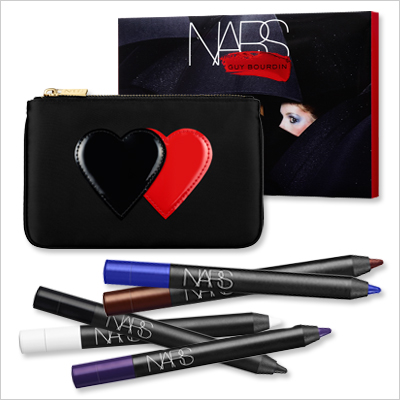 I spent a lot of time looking at this set because I’m on the pursuit of pencil eyeliners that glide on easily and stay all day on my oily lids with inner folds.  These all glide on beautifully and the colors are vibrant!  Unfortunately, I didn’t get to test them on my lids, so I can’t quite tell if they last. 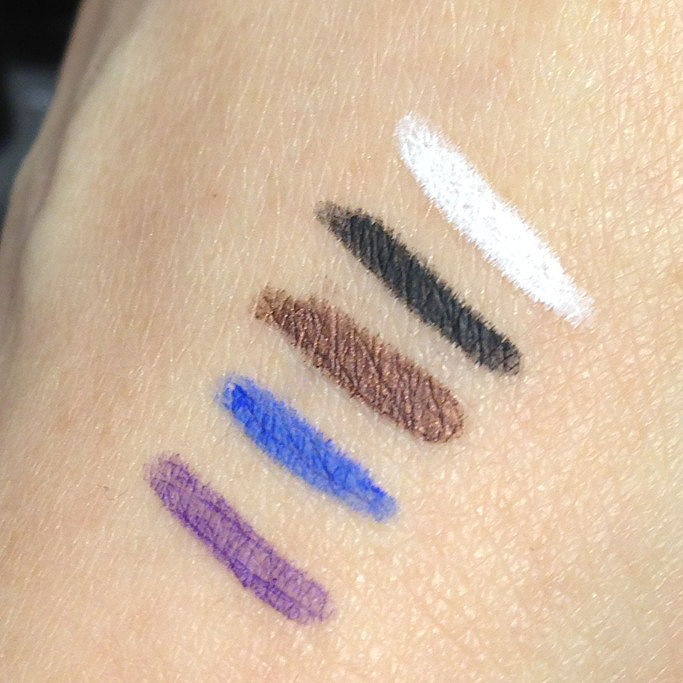 And 2 other sets that I didn’t get to check out in person: 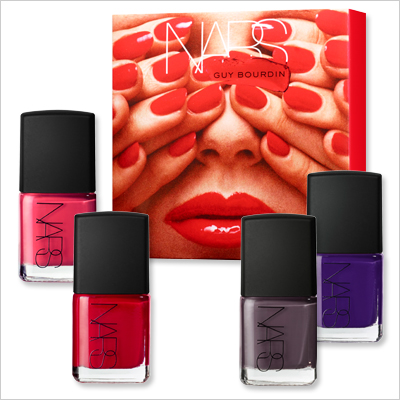 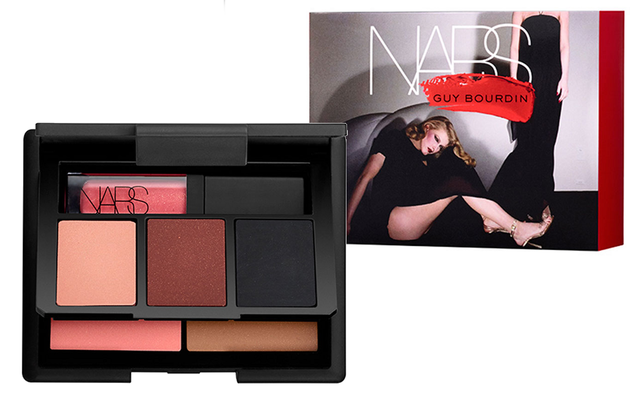 Thank you for making it through this eternal post!!!  If you hadn’t decided to boycott NARS completely by now, do try to check out the cinematic eyeshadows in person.  Many of the shades are dupeable, but I personally prefer NARS’ rendition over Shiseido’s.

To help you with your Holiday 2013 picks, here are some others you should take a look at: