Good manic-Monday all! Trust you all made it through without an extra dose of the blues what with the super long weekend and all! My philosophy is always to bite it in the head if you get a chance, so what better way than to strike out with Nails Inc’s Denim & Studs Bling It On!?

This was actually launched in the UK in May, but only just arrived here in Singapore recently *sigh*. I haven’t been a very big fan of textured polishes because they all just felt kinda weird and fake for some reason. However, something about the deep indigo blue, and the idea of denim really appealed to me! So when I was strolling around in Sephora and caught sight of this, I decided to test it out on a whim.

As I had gelish on (a really deep red & sparkly silver too!), I just painted this over, and was really impressed by how opaque Denim was! This was just 1 coat, hastily applied without much thought or effort put into it. The best part, was it dried within seconds, faster than you can say Nails Inc. Denim & Studs Bling It On! Literally, by the time I was done painting all 5 fingers, the 1st had already dried! 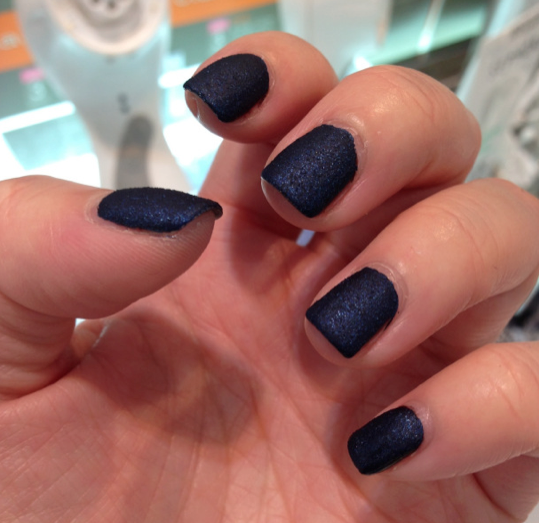 It dries down to a matte, textured finish. There is a frosted metallic tinge, with specks of silver interspersed. The feel is somewhat coarse, kind of what freshly laundered 100% cotton denim would feel like, perhaps slightly grittier. Given the frost, it doesn’t quite look like denim to me, except perhaps the rocker types, but I far prefer this on my nails than some sort of rubbery synthetic-fabric finish.

Obviously you may stop right there, and enjoy this beautiful, very unique, nail lacquer. However, Denim & Studs Bling It On also comes with some gold & silver star-shaped studs. To apply, apply some of the nail glue (included in the set) on the back of the studs, and place them wherever you like using the cuticle stick (also included in the set). I didn’t get to try these out so I can’t comment on how easy it is to do this, or how well the glue performed.

Given how much I liked Nails Inc. Denim & Studs Bling It On, I really wanted to pick up a set for myself. But I did a double-take when I checked the price – SGD50?!?? Come on Sephora Singapore… this retails for GBP17, which converts to approximately SGD33-34 in the UK! How did that get marked up to SGD50? In this day and age of Internet shopping, one really cannot hope to slip such “accidental pricing” to unsuspecting consumers without it coming to bite you back. Not cool…. Not cool at all.

Getting Prepped for That Big Interview! Office…