Summer collections are rolling!!  It feels like a rather wet kinda summer… we’ve been seeing unseasonably high amounts of rain, but then again I would always take the rain over the insane heat wave just a couple of months ago.  And just in case you aren’t getting enough of the deep blue, Lunasol has a really fun collection this time of the year, inspired by the sea for a shimmering collection filled with luminescent colours.  At the heart of the collection are 2 Clear Colorful Eyes Palettes, which is a new format of 4 complementary sheer, luminous eyeshadows.  I received EX01 Ocean Lagoon and the matching Double Coloring Mascara in EX01, and will be sharing them with you today. 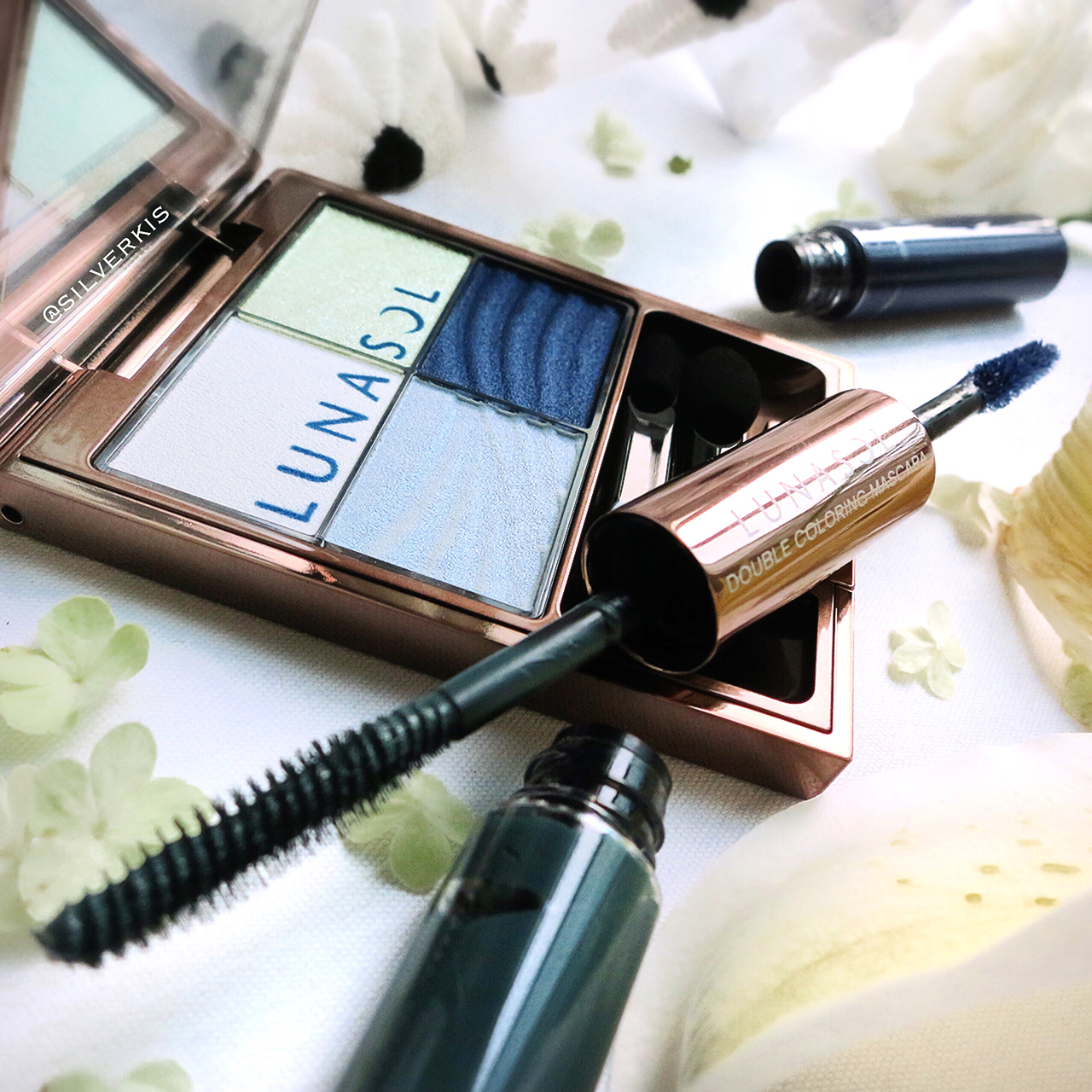 Lunasol Clear Colorful Eyes EX01 Ocean Lagoon Collection is a blue-themed eyeshadow quad, featuring a beautiful wave-like 3-dimensional pattern across the 2 lower pans, and the words LUNASOL printed in blue across the upper pans.  The effect is really pretty, and almost makes me sad to touch the pans as they go away fairly quickly. 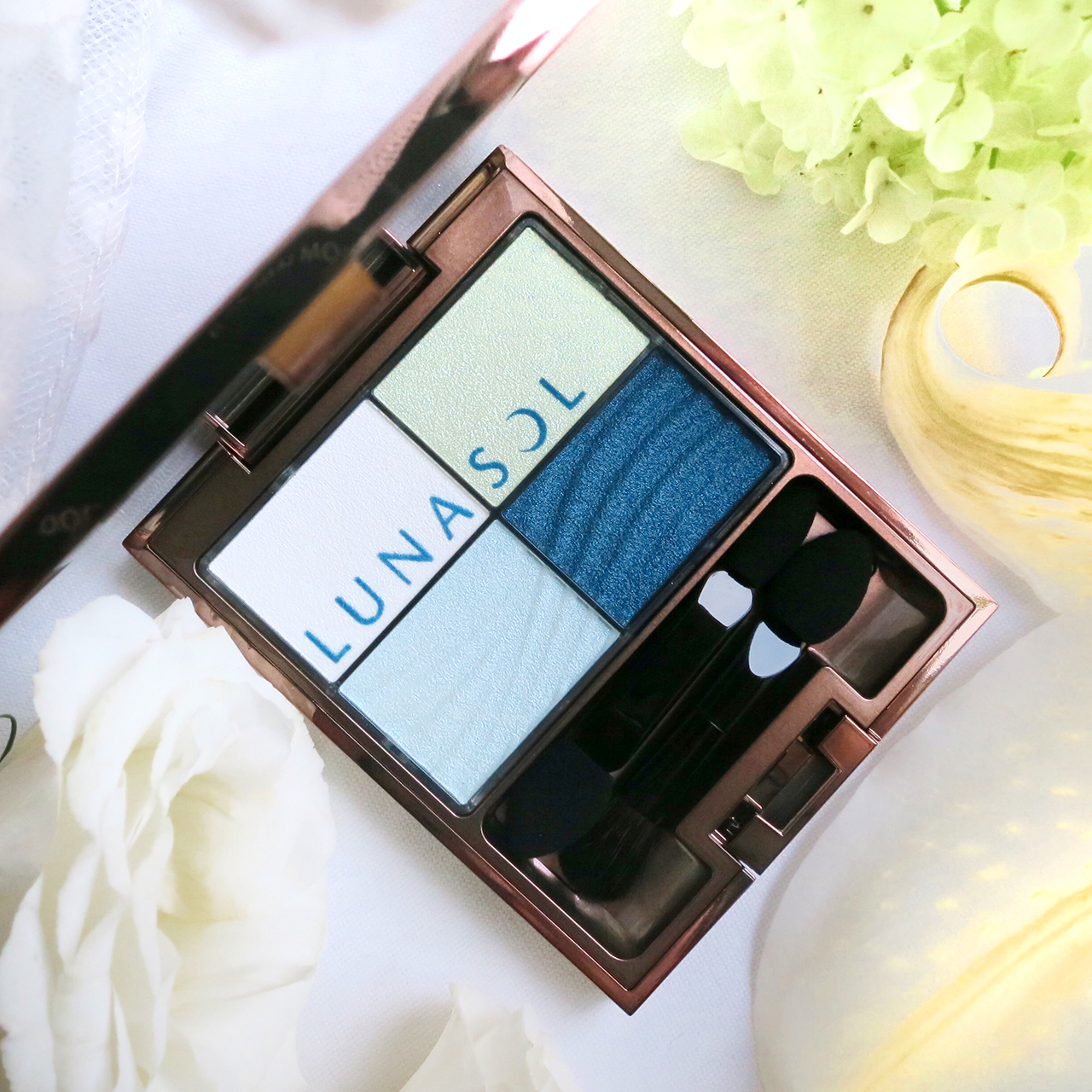 Each of the 4 shades contain some level of shimmers as you can see in this alternate shot: 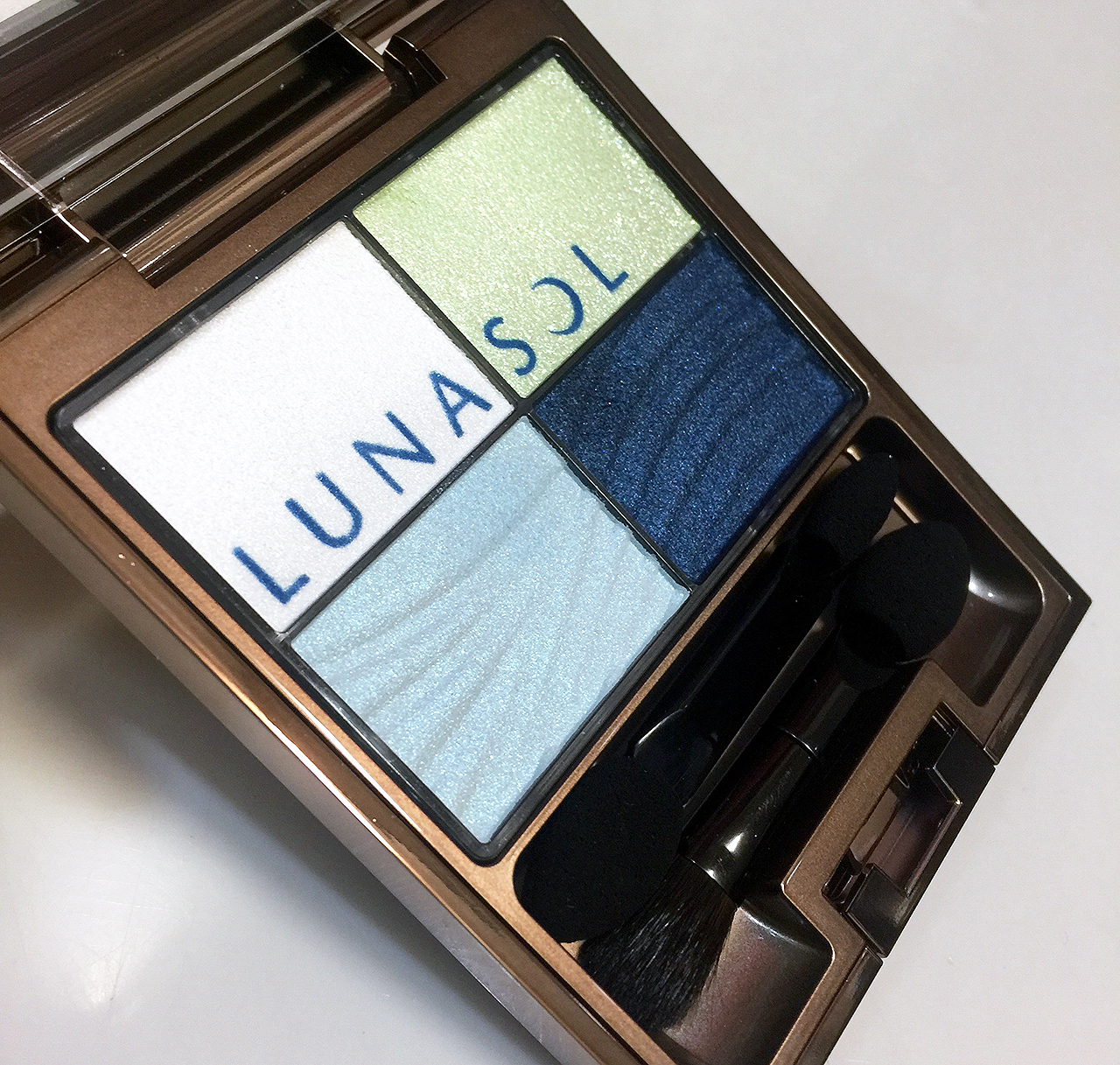 All the shades have a reasonably soft texture as you would expect from a high end Japanese brand, but I do feel this particular palette is not as buttery soft as for example last fall’s Chocolate collection.  But we are splitting hairs here, because when compared with most Western brands, Lunasol’s Clear Colorful Eyes is as smooth and as easy to blend (if not better) as the best of the pack.  And here are the swatches: 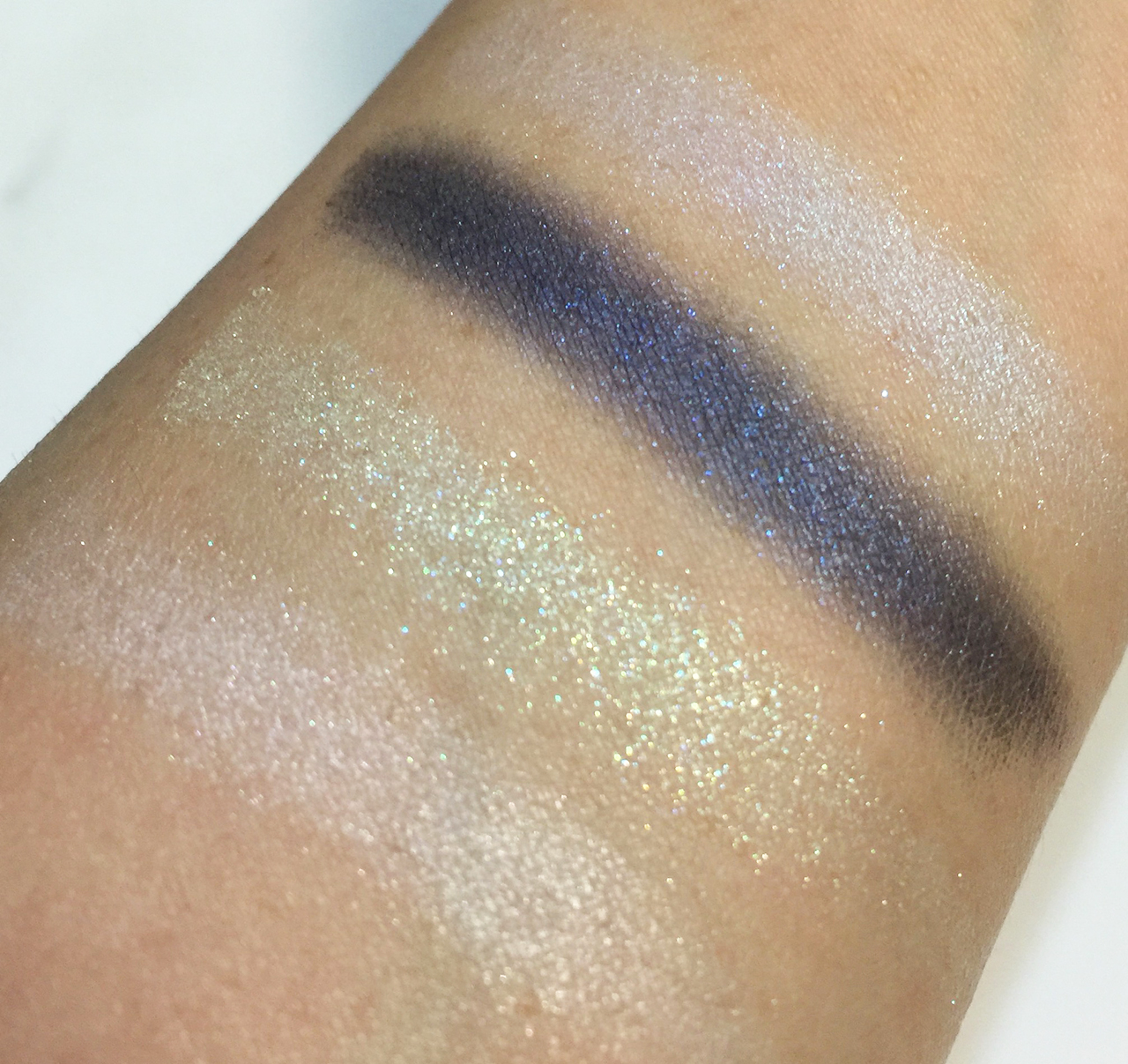 The swatches from top to bottom are:

Here is a quick eye makeup look to show you how the shades translate on the lids: 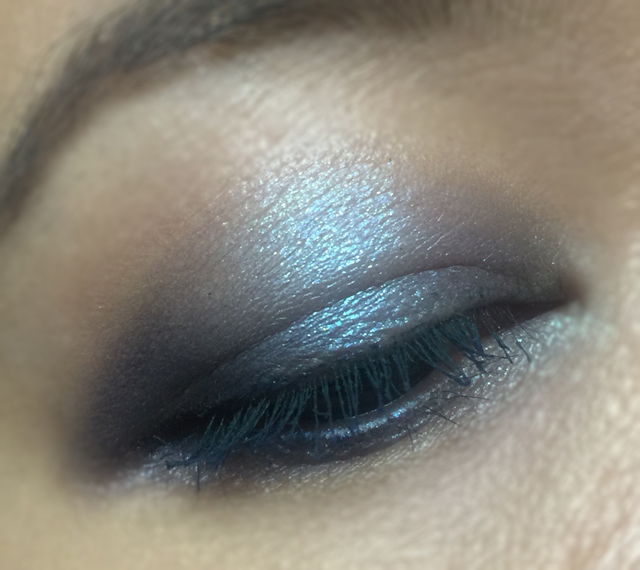 The above eye look was photographed on my very first attempt at using this palette, and I was shocked by how stunning it looked, and how incredibly easy it was create this!  To start, I applied the light blue all over 3/4 of my lid.  This took a few passes to build up enough opacity, but I left it slightly sheer to keep things from looking too overwhelming for a day at the office.  Thereafter, I added the dark blue to my outer 1/4, blending inwards.  I also lined 3/4 of my lower lash line with the dark blue for some definition.  Patted some mint green onto the middle of the lid, and watched it transform the light blue into an iridescent pop of colour!  Finished by adding a dash of white to my inner corner and also loosely dusted some under my brow bone for highlight.  I also used the white to blend out all the blue shades along my crease.

At this point, I would also like to draw your attention to the Lunasol Double Coloring Mascara in EX01.  I had reviewed the formula of Lunasol’s dual-ended mascara before here and I believe the formula remains the same.  Each side of the mascara contains a different luxurious coat of color, and the wand is a very Asian-friendly brush that graduates from shorter to longer bristles to coat each tiny lash. 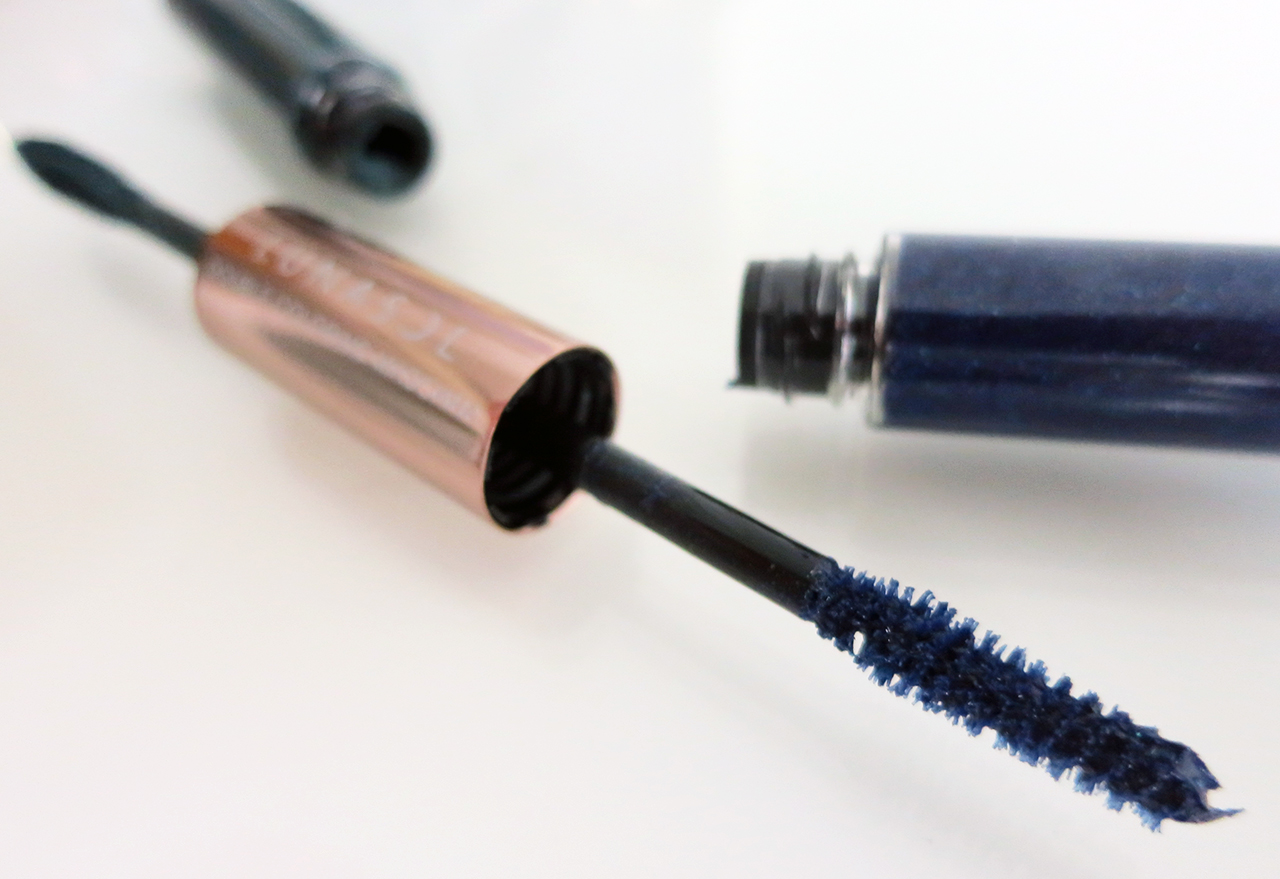 This season’s offerings come in 2 limited edition shades, and I have EX01 here which features a teal blue shade on 1 end, and a mid-toned navy blue with shimmers on the other.  Both shades are individually opaque enough to be used on their own, but you may also layer them together to form a complex blue-green as I had done in the eye makeup look above.  You could also wear 1 of the shades on top of the other just on the tips for a bit of ombre look!  I love that the colours are really subtle on my dark lashes, but still visible up close for some fun. 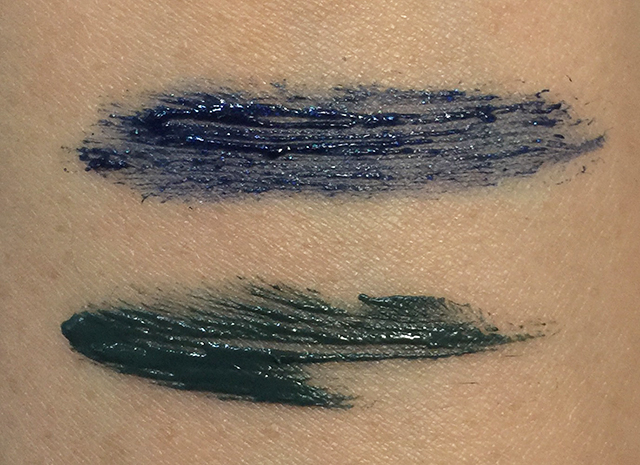 And before I go, let me show you the full makeup look in context, featuring Lunasol Clear Colorful Eyes EX01 Ocean Lagoon Collection and Lunasol Double Coloring Mascara in EX01 on the eyes. 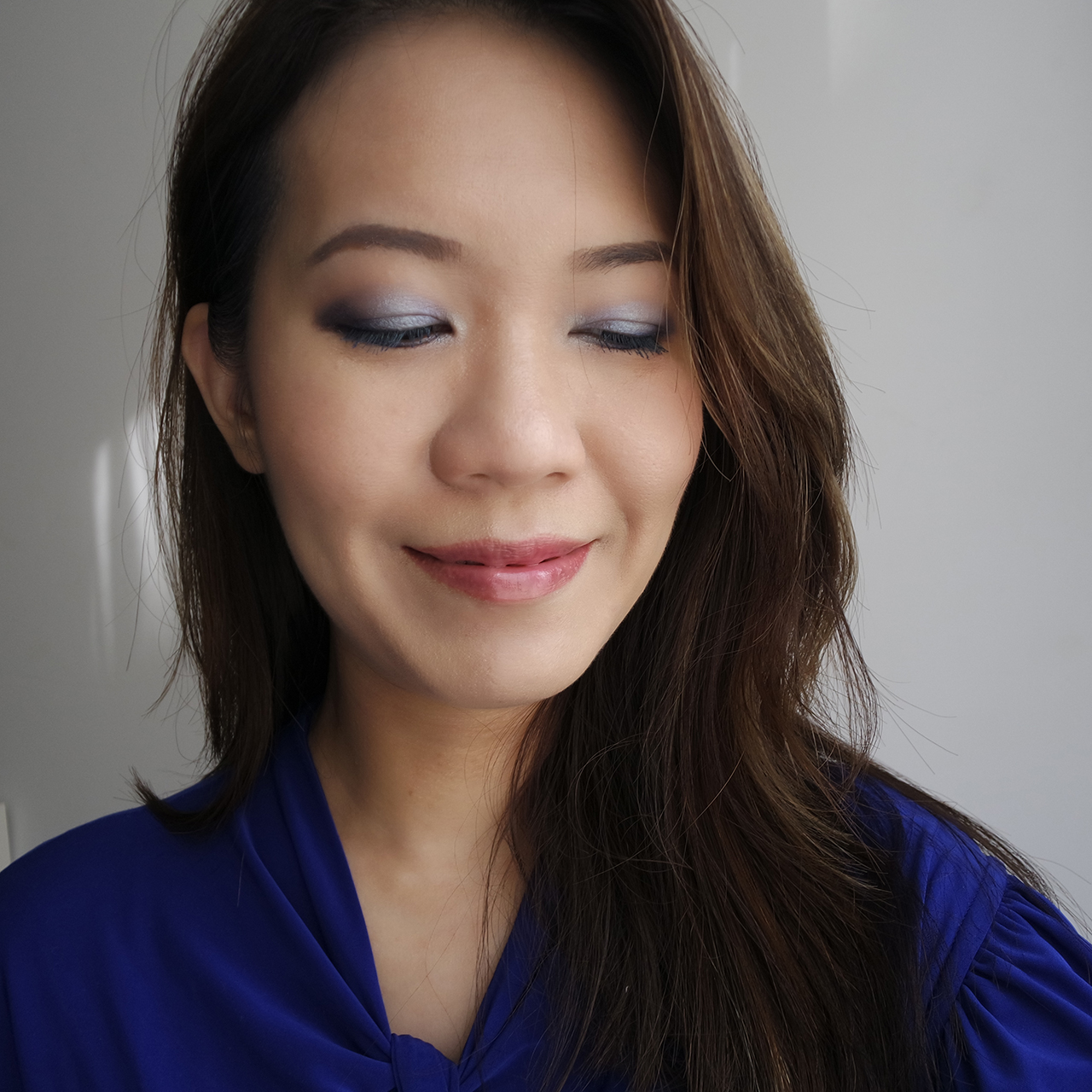 For this makeup look, I have also worn Lunasol Sheer Light Gloss in shade 04 Milky Coral.  I have 3 shades in total from this collection, along with a Shining Clear Eyes, both of which I will show you in the follow-on post tomorrow!  Lunasol’s Summer 2016 Makeup Collection is now out at counters, please feel free to check them out, and be sure to return for part 2 tomorrow!