4 Handy Concealers to Keep In Your Purse!

There is nothing worse than having to dash to a function after work, and realizing an entire day of staring at the computer has brought out those ghoulish dark circles. Or perhaps your makeup has faded in some areas (for me it’s always around the nose, chin and forehead between the brows), and you need to spot touch-up. I could go into a long-winded description of how to blot, powder, etc… but what I’d really like to do, is to show you 4 handy concealers that I pack with me for emergency situations like these!

Generally speaking, I prefer cream concealers because they offer greater coverage and stay crease-free longer (especially for my dry under-eye area). However, when I have been out and about for an entire day, my skin is oilier than when I started fresh in the morning, and since I really only need the makeup to hold for another couple of hours, liquid concealers work much better. Also, liquids don’t require heavy blending, and is less likely to move your foundation or cause it to pill. 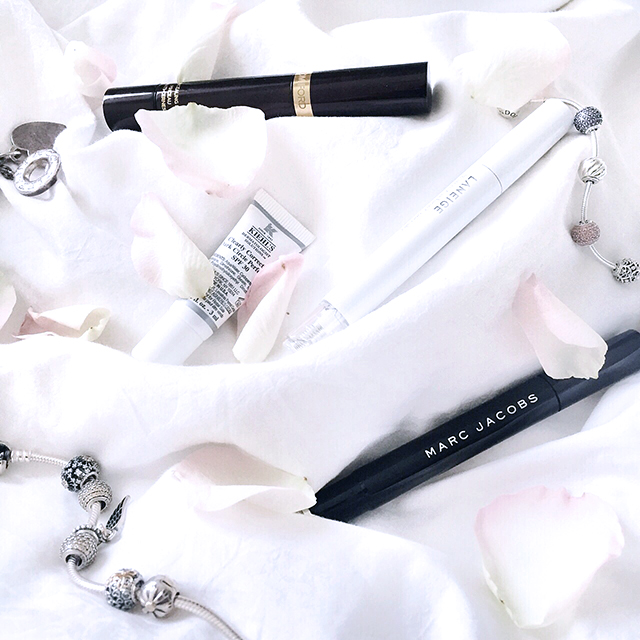 There are 4 such liquid concealers I’d like to show you today.  They are:

I was quite tempted to throw in the infamous YSL Touche Eclat which made these pen-type concealers so popular to begin with, but that really does not work as a concealer on me at all as it is much too sheer.  And I don’t suppose anybody needs to hear anymore about that, so 4 it shall be!

As you can see, these 4 have made it into my purse for their slim portable shapes. The Kiehl’s one I have here is actually a 3ml deluxe sample, but the full-sized at 15ml is not a whole lot bigger (longer not much fatter, and with the same thin dispensing tip). More importantly, most of these are designed to be used directly on the spots and should not require a separate brush or sponge to blend.

**I do have to point out here at the Kiehl’s Clearly Corrective Dark Circle Perfector is actually marketed as a hybrid product, call it perhaps a tinted eye cream.  But I found it a little lacking as an eye cream, and the tint is much too opaque for all over use and I really don’t want to wear a tinted eye cream to bed at night.  So, I personally consider this a concealer-with-skincare benefits, which is just about right at home with the other 3 as they all boast some sort of skin loving ingredients too! 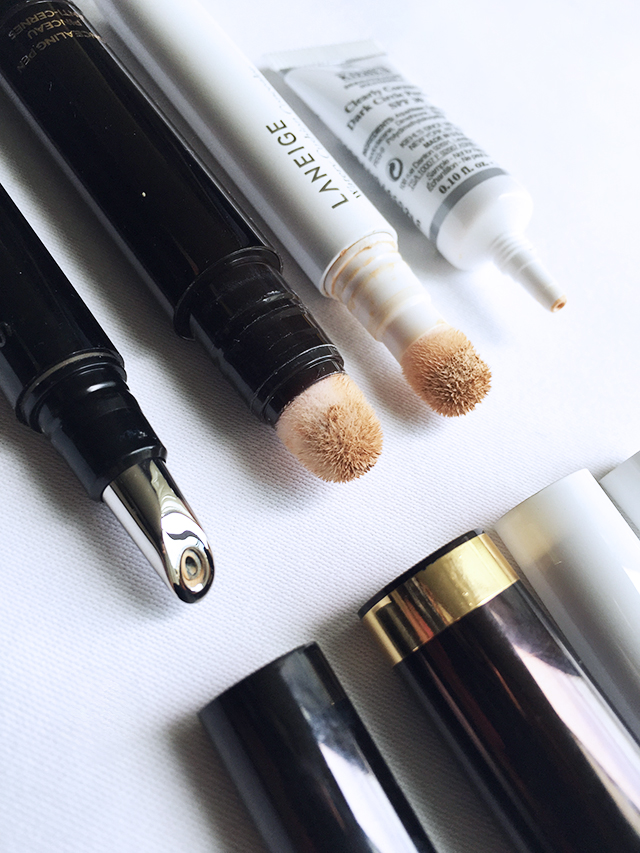 I found the applicator / dispenser tips to make quite a big difference with these concealers, and here are my thoughts.  From left to right:

Here is a look at how the product dispenses if you swipe it down directly from the applicator: 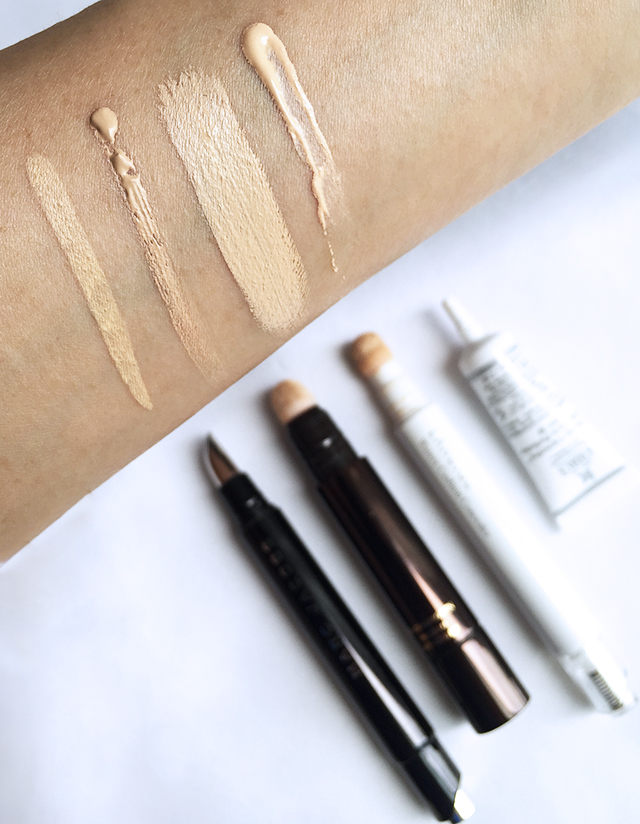 Here is a closer look at the swatches, partially blended from the single swipes shown above.  All are the lightest shades in their ranges, with the exception of Kiehl’s which is only available in this one shade. 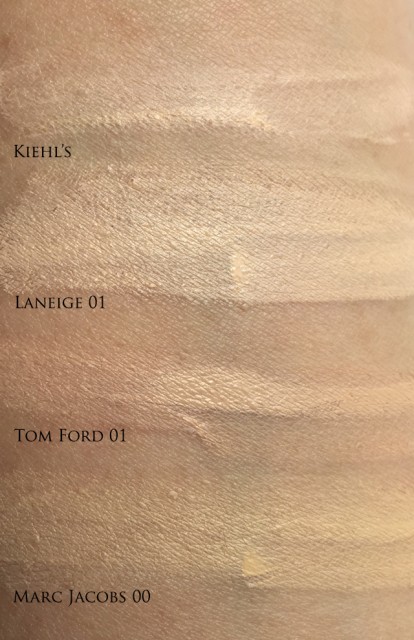 Sexy packaging aside, the product contained inside is what matters the most. Of the 4, I found myself reaching for Tom Ford and Kiehl’s the most. Tom Ford has the best coverage of the bunch, which is not immediately apparent in the swatch above as there was the least amount of product dispensed in that swatch.  In contrast, Marc Jacobs had the least coverage, and I could never adequately cover up my undereye circles with the Marc Jacobs. Kiehl’s has a nice buildable coverage too and I’ve been enjoying that equally. When I first got the Laneige I was using it quite often as it felt quite brightening and had good coverage.  But after trying out the rests, I realized Laneige’s was way too light and dried down to a matte finish that emphasised fine lines.

Overall, my favourite would be Tom Ford’s Concealing Pen as it had a good buildable coverage, and had the easiest applicator to work with.  I also liked the satin finish it leaves as it dries down which is more flattering on dry skin.  However, at USD52 for 3.2ml of product, it does come with a hefty luxury price tag.  A more affordable option is the Kiehl’s Clearly Corrective Dark Circle Perfector, priced at USD38 for 15ml.  It also comes with a generous SPF30 sun protection which is great, but there are no shade options to suit different skin tones.  Again, I need to reiterate, the Kiehl’s is not marketed as a concealer, but a tinted eye cream so do with it what you will!

Do you have any favourite concealer that you carry around for touch-ups throughout the day?  If so, please share!

This post featured some press samples and some were purchased by me.  Regardless, all opinions expressed here are my own honest, unbiased views.

12 responses to “4 Handy Concealers to Keep In Your Purse!”