The weekend is almost here, and there is no better reason to break out the sweets and treats!  I’ve been enjoying lighter fragrances lately, but occasionally I need a change in palette from florals, and have been reaching out for Jo Malone Vanilla and Anise. 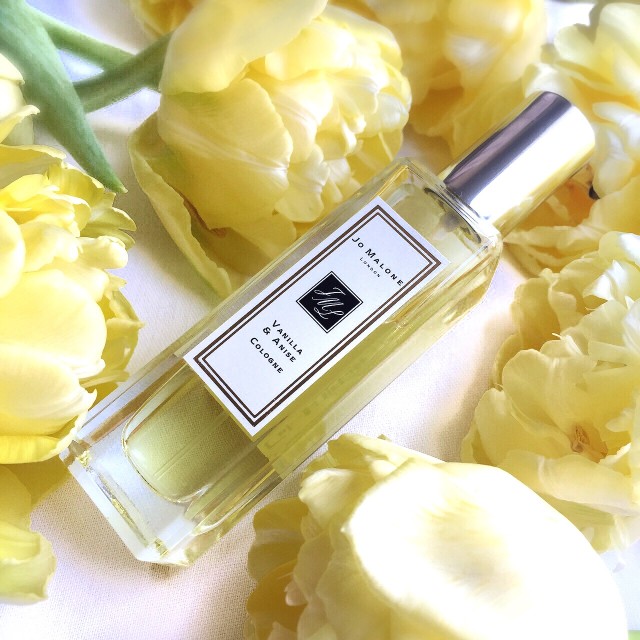 Jo Malone Vanilla and Anise was first launched in 2009, and has since grown into a full range of bath & body products.  It is meant to evoke the sense of vanilla orchids blooming at day-break in Madagascar.  The inclusion of anise makes this one an oriental brew with some aromatic spiciness to jazz up the boring ole vanilla.  But as always with Jo Malone, Vanilla and Anise is a good modern, linear fragrance (perfect for layering) that is never dull.

It starts out with a slightly sharp citrus, but immediately settles into a smooth cashmere body.  The fragrance of vanilla orchids is strengthened by tuberose, jasmine and frangipani.  The mix is fairly sweet to my taste, but prevented from being cloyingly saccharine by the addition of cloves, wild fennel and star anise.  Vetiver gives this fragrance a nice slightly sharp edge to keep things modern and prevents us from smelling like we just stepped out from the spice market.

Jo Malone Vanilla and Anise is a warm fragrance, thanks to the presence of amber and tonka beans, but still manages to be light enough for the warmer seasons.  I like wearing it on its own, and it lasts for 3-4 hours on me before fading away, which is somewhat average for a Jo Malone cologne.  To keep it from becoming too gourmand, I love layering Vanilla and Anise with English Pear and Freesia, and Nectarine Blossom and Honey.  Jo Malone Vanilla and Anise is a gentler, more classic and feminine take on vanilla than Atelier Cologne Vanille Insensee [reviewed here], both I love but for very different reasons.

Have you tried Vanilla and Anise before?