My quest for the perfect pencil eyeliner – Part I

I have been in search for the perfect pencil eye liner forever…  I have these hidden double folds and oily lids that make anything but liquid liners go off almost right away.  My eyes also tend to be watery, so anything on my waterline goes pretty quickly too.  For years I have avoided pencils… until the arrival of gel pencil liners that claim to be blendable yet smudge proof once set.  And of course, the traditional khol and pencil liners have improved vastly in formula.  So started my quest for the perfect pencil liner – not many of them work for me but that’s expected given my quirky eye design… but at the very least the most resilient of them stay for a good portion of the day when worn on my lower water line and lash line.

I have accumulated so many that it is impossible to cover them all in 1 post.  Instead, I’m going to give a general overview for each, grouped simply by price point and accessibility – high end, mid-range Western brands vs Asian brands.  If you have specific questions about any of them, please feel free to leave me a comment.  This is going to be a 3-part series, starting today with these high-end pencil liners! 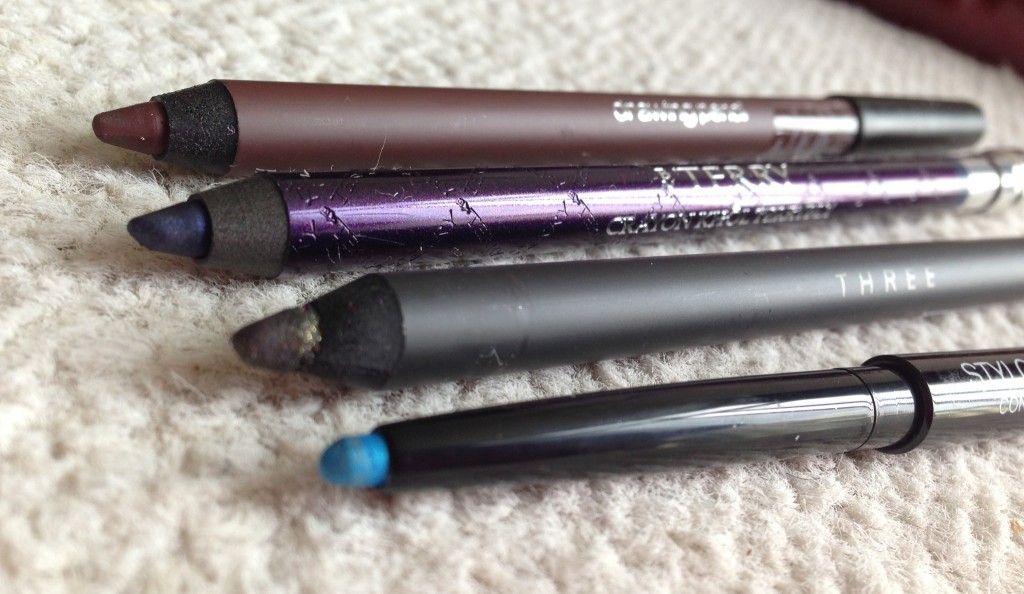 The star of my entire collection, and the most obnoxiously expensive, are these kohl pencils from By Terry. 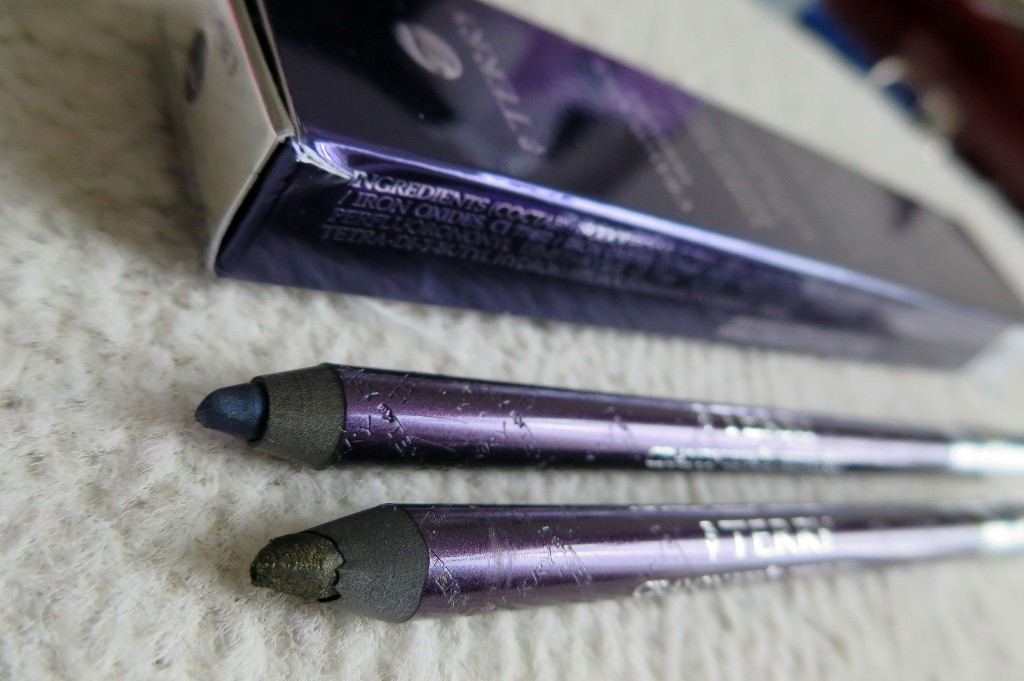 Kohls are generally known for their smooth application and blendability, and these Terrybly pencils take them to the ultimate level of performance.  They are so creamy, they glide on effortlessly on both my upper and lower lash lines.  Because they are so soft, they do require the lightest hand when applying, and invariably needs to be sharpened after every use, which in turn translates into a rather high level of product wastage.

The main draw for me was the super intense color and a few of the shades in the line-up also come in some amazing glitter (my personal faves are Bronze Generation & Black Print)!! 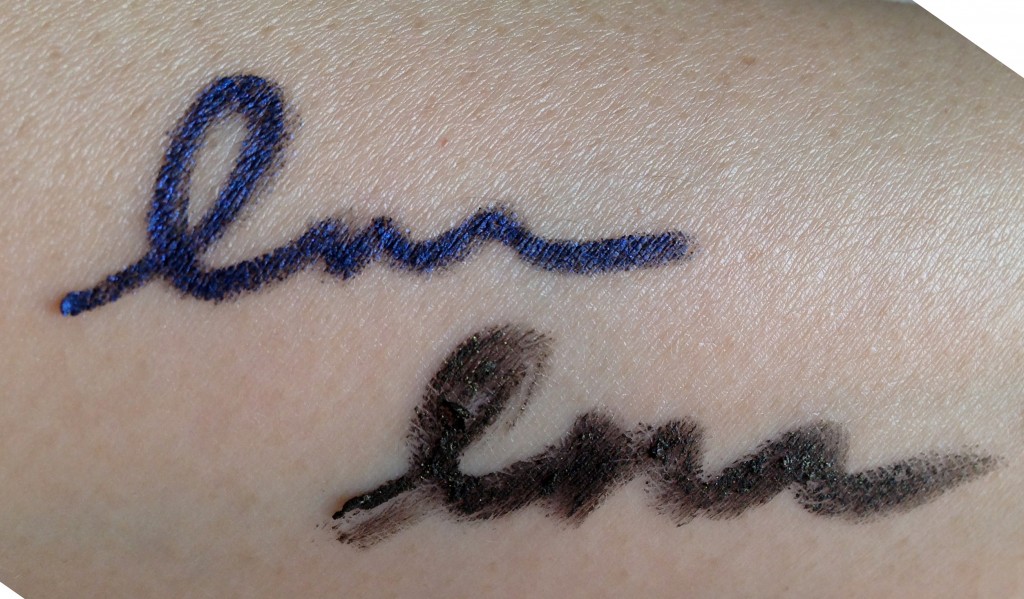 Pictured here are swatches of Blue Vision (a metallic navy blue with some slight black tinges in it), and Bronze Generation (a dark brown with some golden glitter in it). As you can see, there is some smudginess around the edges of the lines which is due to the creaminess of these pencils.

These By Terry Crayon Kohl Terrybly pencils remain blendable for about 30-45 seconds after application, allowing you to quickly work them into an allover shade or base if you so desire.  You could also take a fine brush and wing it out to create some dramatic winged eye look.  Thereafter, the product sets and remain quite smudge proof.  I’ve had some success getting it to stay on my upper lash line for most of my day when used on top of primer and eyeshadow.  On my lower waterline it stays for about 6 hours before my watery eyes fades away some of it, although some semblance of it stays throughout.  The trick, to me, is getting it to fully set, which requires me to not blink at all for the full 30-45seconds (which can be painfully long!).

When Jolene first told me about these, I had pretty much dismissed it ‘coz… $55 pencils!!!  And not just pencils… Kohl pencils!!!  I’ve never had any use for kohls!!  And then she managed to finagle me into picking up a few on her behalf… and dangit, I was hooked!  Look these up and swatch at your own risk!

No review on eye liner pencils will be complete without at least a cursory introduction on these THREE Flash Performance Eyeliner Pencils.  They seem to have attained cult status all of a sudden and are de rigor these days. 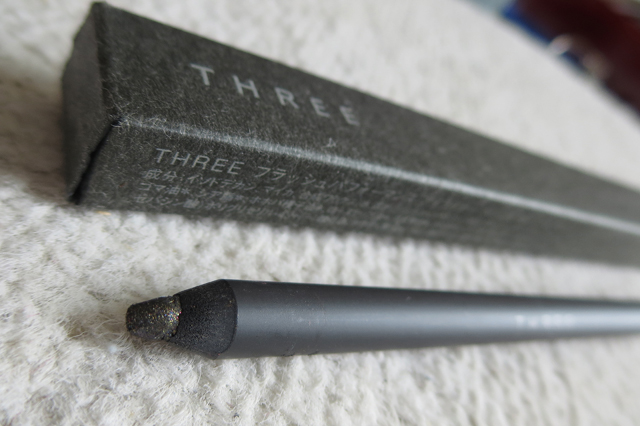 These are gel pencil liners, and claim to be waterproof.  They come in a variety of lovely shades, the most popular of which, is 05 Eye Rock as pictured above.

I must admit, I’m in love with 05 Eye Rock as well, because… look at those glitters!! I see pink, I see blue, I see green…. oh my lovely rainbow eyes!! And it’s packed full with those amaze-balls stuff, yet for just a thin line, it stays completely wearable, just more fun.

The other end of the pencil comes with a handy silicon smudger, which works surprisingly well for winging out the lines and blending them upwards as desired. 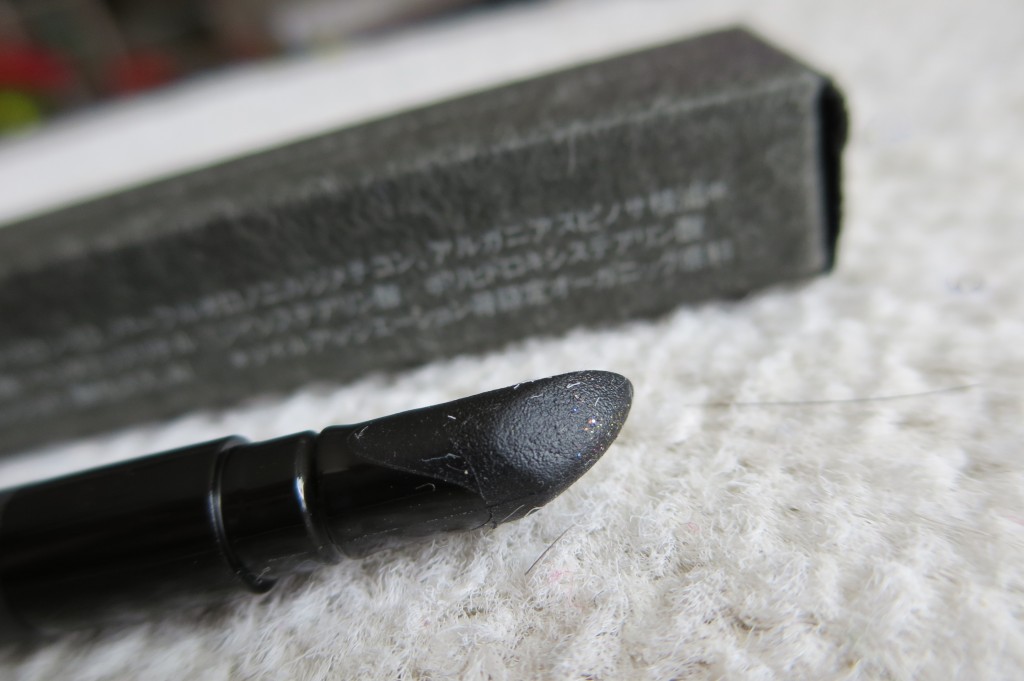 In terms of performance, I find these really quite smooth to work with, just not quite as smooth as the By Terry ones, which is like saying it got to the moon second.  On the other hand, they are not as soft as By Terry and are therefore easier to handle and doesn’t need to be sharpened as often.  On my super troublesome upper lids, they don’t quite stay all day.  On my lower waterline though, it does stay for a good 6 hours before starting to wear off although never completely.  The only reason I can’t recommend these is because the only places in the world to get these at the moment are in Japan or Bangkok.  You could also pay a hefty premium and get them online, but then they cost more than the By Terry pencils.  Depending on currency exchange rates, the last time I bought these from Bangkok was about $48, and from Tokyo Narita Airport $40. 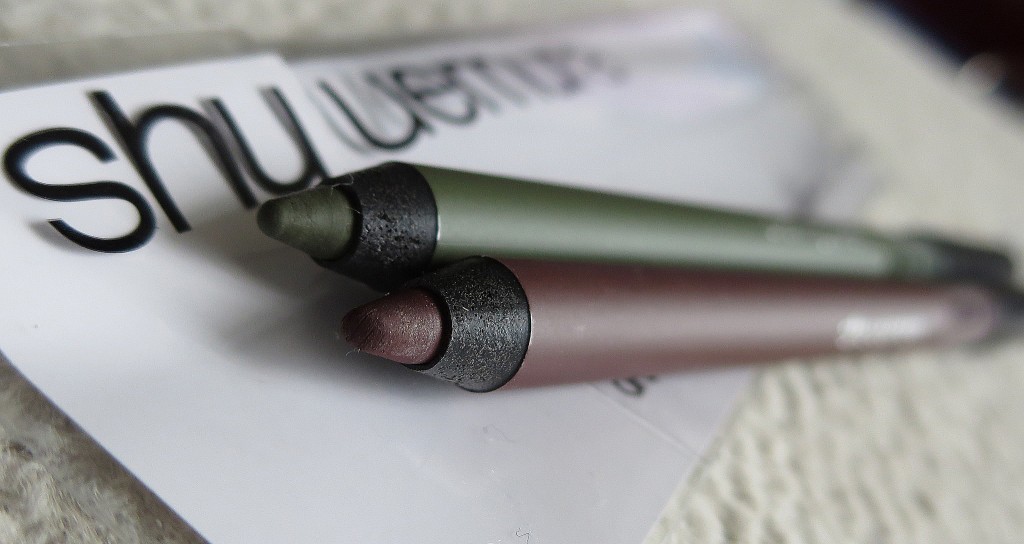 These have been around for a long long time, and to be honest, I found them rather unremarkable.  Touted to be long-lasting, smudge-proof and water-proof; but on me they are lackluster.  Nowhere as smooth and creamy as either By Terry or THREE, and nowhere as long-lasting.  I couldn’t wear them at all on my upper lids without smudging, and they wear off within 4 hours on my waterline.

As you can see from the swatches above, the colors are nowhere as pigmented as either of the 2 preceding pencils above.  Also, the lines are not as crisp as what is achievable with THREE.

Shu Uemura’s Drawing Pencils retail for $34 each, and are easily accessible at all Shu Uemura counters and stores.

Any makeup addict think of Tom Ford as the paragon of luxury, and nothing in the beauty line is flawed.  I am one such loyalist, and picked up the Tom Ford Eye Defining Pencil in Bruise recently to accompany my Orchid Haze palette. 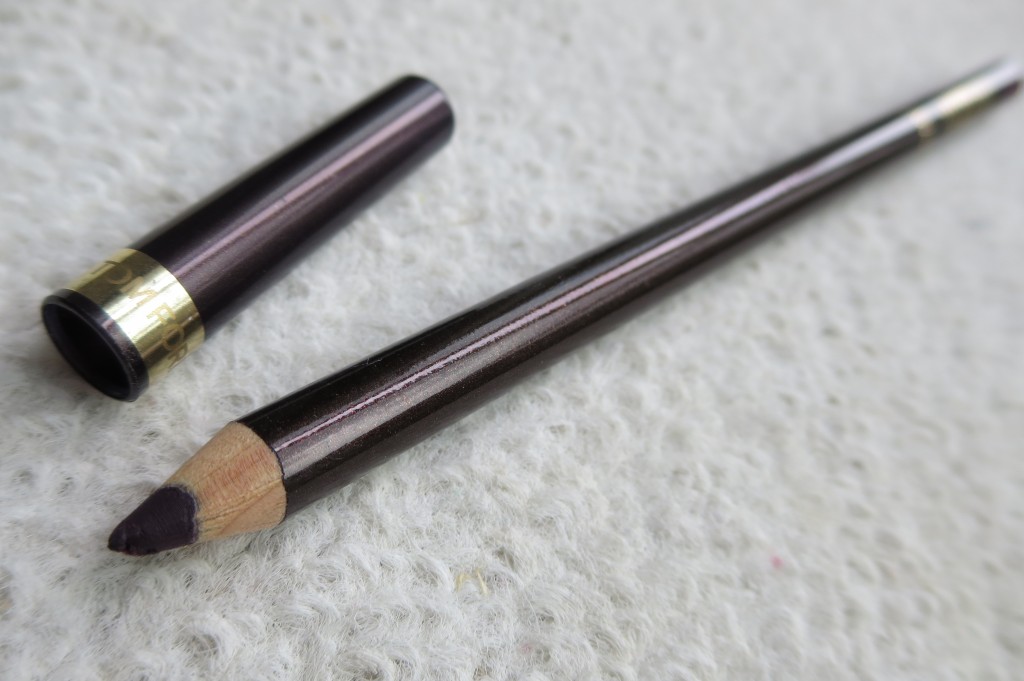 This is supposed to be another kohl-effect liner that is blendable for a moment and then sets to become smudge-proof.  Unfortunately, I found it to be nowhere as smooth and creamy as either By Terry or THREE, and it doesn’t last at all on my upper lid.  Of course, I have crazy lids… but even on my waterline, this thing doesn’t last.  And at a whopping $60, this is the most crazy expensive pencil evahh!!!

A long long time ago, I invested my hard-saved student pocket money on my very first eyeliner pencil from Chanel, and watched it smudge me a panda eyes.  Then 10 years later, Chanel introduced these Stylo Yeux Waterproof eyeliners, and I tried them again because everybody raved about how indestructible they are. 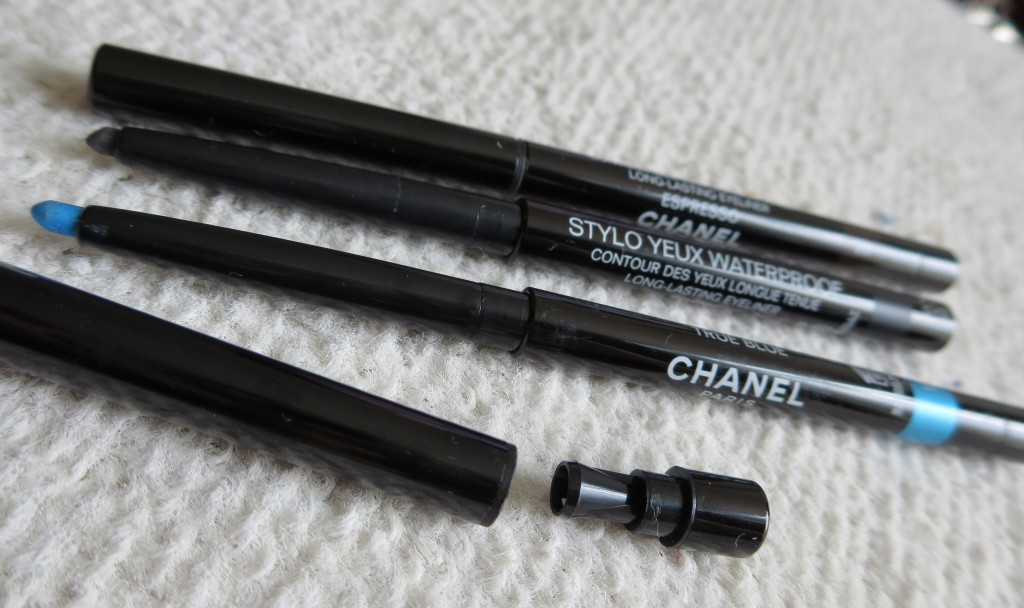 Certainly, they have improved in lasting ability.  I am still not impartial to those interlocking double-Cs, but after gone a full round, I don’t think these last quite as long or are as pleasant to use.  The formula certainly varies between shades… the black is smooth enough (though it’s not quite in the big leagues yet), but the turquoise blue from last summer’s collection is simply horrible.  The unique selling feature is the twist-up mechanism, and a sharpener that you can pull out from the back.  I love not having to use a sharpener, but this sharpening thingy at the back, I have yet to master (it’s like death cap for cutie pencils).

Clearly, this is not the entire compendium of all the high-end pencils out there, but just a handful of those that I’ve tried.  Depending on lid conditions, and varying preferences for pencils, I’m sure there is a market out there for each of them.  Myself, I am horrified to be falling for those By Terry Crayon Kohls (all thanks to Jolene’s arm-twisting).  Hopefully in the ensuing posts, I can find a dupe for it, so stay tuned!