I sure hope the Internet powers-that-be don’t decide to slap a R-rating on this blog after today… I hadn’t consciously planned on having so many raunchy titles back to back, so let’s call it sleight of hand. Clearly, my sub-conscious is going places these days, and it really can’t be helped when I am shrouded in the risqué air of Etat Libre d’Orange’s Putain des Palaces! 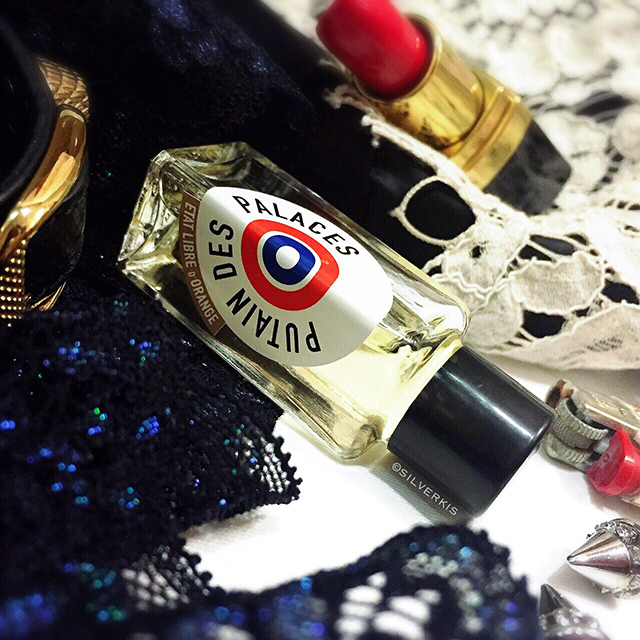 Putain des Palaces (loosely translated as “Hotel Whore”) is one of the pioneer crop of fragrances released by Etat Libre d’Orange, effectively establishing the cult French fragrance house’s reputation for making bold, irreverent statements. To me, Putain des Palaces feel very much like the fragrance equivalent of post-modernistic conceptual art, taking the nose to places it wouldn’t expect, to explore bodily experiences and evoke emotional responses apart from the usual “nice”, “poignant”, “romantic” meanderings inspired by perfumes. Shock is very much a part of the creed at Etat Libre d’Orange, and that is bottled to a finesse in Putaine des Palaces.

“…the temptress who awaits her prey in the hotel bar, and leads her lucky victim to unimaginable delights…”

To say Putain des Palaces is an unusual perfume will be an understatement. It starts out smelling like lipstick, rather sweet and powdery. The perfume notes state violet, rose absolute and lily of the valley, but this is by no means a coy floral bouquet. Rather, there is a synthetic edge to the sweetness, and since this is a beauty blog, I’d say the overall impression is L’oreal not Chanel (with all due respect to both brands!). It effectively dispels all illusions of a dark, sensual boudoir… no, this is sex in its most basic, animalistic form. And quite apt too, because about an hour into the first spray, the powdery air clears and Putain des Palaces shifts into something quite carnal.

As it settles, I sense a warmer, lazier note within Putain des Palaces. There is just enough amber to give it that soulful, sensual, post-coital impression without going overly oriental. It is hidden underneath layers of animal notes in which I caught whiffs of cumin and stale cigarette smoke (is it leather? I can’t be sure…). Tracey Emin’s bed comes to mind in all its frank open humanity, unmade dirty sheets, empty vodka bottle, used condom and all. [PS: Tracey Emin My Bed is now back at the Tate Britain for the first time in 15 years for public viewing.]

Putain des Palaces is a provocative fragrance executed to perfection by Etat Libre d’Orange, and one thatI will admire for a long time. However, as with art, it may not appeal to everyone. Personally, I’m not fond of the sweet powdery opening, although once it settles it feels quite fun, like a little secret. The funny thing is, my hubby caught a whiff of it on me, and commented that he liked it… and he’d never ever said that of any fragrance I wore before.  Clearly there’s something here that appeals on a basic level…

What is the most controversial piece of art (fragrance/music/movie/painting, etc) that you’ve ever encountered?

This post featured a small decant PR sample provided for my consideration.  All opinions expressed here are my own honest, unbiased views.