Are you ready for Christmas?  I most definitely am!  Although there are still some people I have yet to shop for, but all the lightings and decorations are certainly giving me a warm fuzzy feeling inside.  And just in case you are still hunting for ideas, you may want to consider a nice bottle of perfume for yourself or a loved one.  One of the latest to be released, just in time for the holiday season, is Estee Lauder Modern Muse Le Rouge! 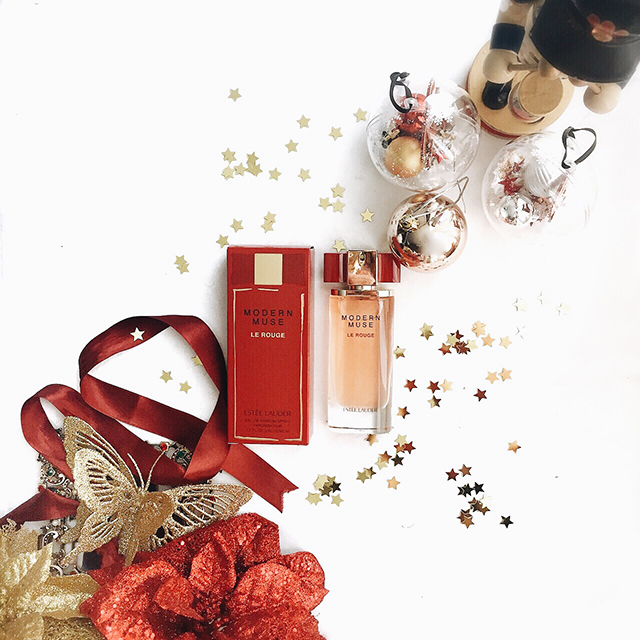 Le Rouge is the latest flanker to Estee Lauder’s Modern Muse fragrance for women.  It was first released in US and parts of Europe earlier this year, and has been recently launched in Singapore and Asia for the holiday season.  The signature tall, curved bottle with a bow on the top remains, but this time, adorned in sexy siren red.

Fronted by social media super star Kendall Jenner, Modern Muse Le Rouge embodies the glamorous and bold modern woman who is confident in her femininity.  With her name thrown about so much, and the campaign posters made her appear grown-up sophisticated, I had almost forgotten how young Kendall Jenner really is.  Recently turned 20, Kendall Jenner is of an age that I could have been her mother, yet here I am, finding myself in a position and mood to enjoy a fragrance made for her.  That, I think, is exactly where Le Rouge will excel at – making Estee Lauder as a brand more accessible to the younger demographic that it needs to pull in, whilst still maintaining its older fans. 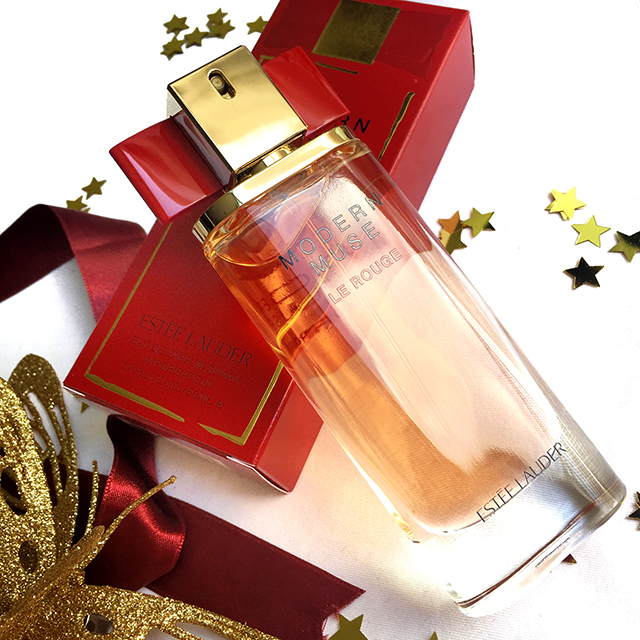 In the same style as all the other Modern Muse fragrances before it, Le Rouge is built around the “dual-impression” structure, which allows 2 contrasting accords to be experienced.  Le Rouge starts out with a big ripened roses accord, which is filled with the juices of Bourgeon de Cassis and Raspberry, and in combination with the Bulgarian Rose and Rose Centifolia is almost-too-sweet for my tastes.  The bouquet is saved by the tart pink pepper and spicy saffron blend, not altogether unusual in a floral blend.  What makes Le Rouge interesting is that after a few minutes the velvet cream accord starts to build up, and plays a good counterpoint to the rose accord.  The fragrance notes speak of Madagascar Vanilla and musky Ambrette; but on my skin an earthy Vetiver actually becomes quite prominent, which was interesting and completely unexpected.  It is warmed by Patchouli, and made more harmonious with Magnolia Flower and Jasmine.

For a flanker, Le Rouge is vastly different from the preceding Modern Muse Chic [reviewed here], so do not pass this up simply because you already have 1 of the Modern Muses or perhaps skipped for some reason or other.  In many ways, Le Rouge feels younger, more vivacious to me, yet the vetiver in it makes it unusual enough to appeal to a more matured crowd.  It does not have extreme sillage, but floats around me for a good 6 hours, and stays on the skin up to 8 hours.  Adorned in red and gold, Estee Lauder Modern Muse Le Rouge is perfectly dressed for holiday parties, and will certainly look fabulous on any vanity!