One thing I’ve noticed about fragrances, is that they take time to appreciate. Which is my excuse for being so tardy in reviewing these floral eau de toilettes from Diptyque’s Les Eaux Collection. I received vial samples of the entire collection shortly after their launch in July, but for some reason they did not quite appeal to me until now. I think as the seasons change, I’m in the mood for something sweeter, purer, and lighter on the palette. 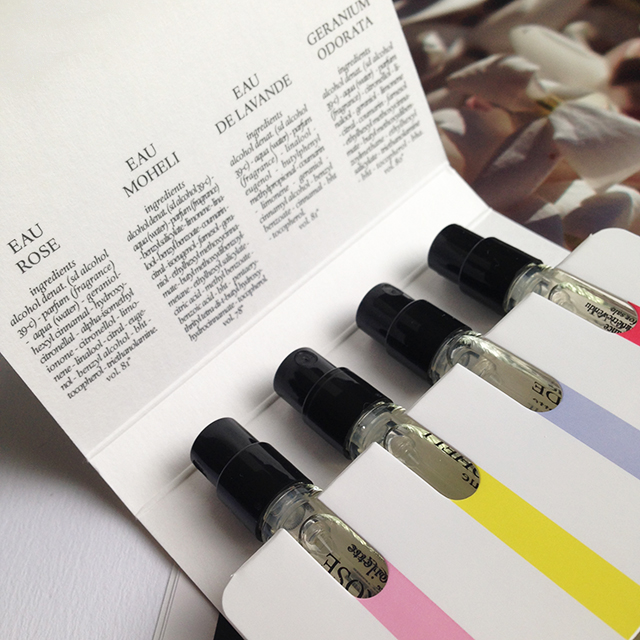 There are 4 in the Les Eaux – Les Florales Collection, all of them single-notes. However, some of them are surprising to me, which may be a function of not having spent a lot of time being a girly girl flitting about in the gardens in my youth. But surprising is good in a fragrance, it forces you to make an opinion, and shapes facets of ourselves. And that is perhaps what I love about Diptyque… nothing is ambivalent. 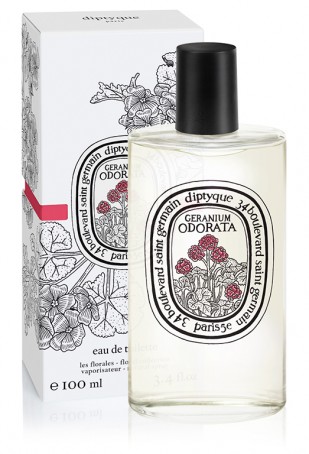 Geranium is an unlikely star in high-end perfumery, and it is that which makes this particular scent outstanding. Geranium Odorata starts out with a fresh burst which is almost rosy without going overly sweet and old lady-ish, but maintains some greenery in the nose. It is intertwined with bergamot and pink pepper which keep the scent feeling fresh. The scent then gently eases into a soft sweetness balanced by warm cedarwood, tonka bean and Haitian vetiver. I love the uncomplicated warm floral that is Geranium Odorata, and it remains beautiful on me throughout. 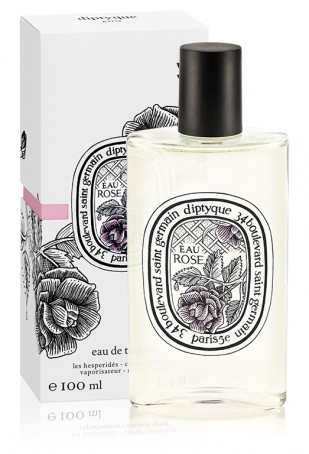 Rose is not my favorite scent as I have been plagued for far too long by those old lady powdery scents in my youth. And so it was a journey in rediscovery for me, when I was first presented with Diptyque’s Rosamundi candle. It was an olfactory awakening of sorts, an epiphany of all the potential that roses possess (how silly that may sound). But I was disappointed by how poorly Rosamundi burned, and was hoping for a more lasting version of that scent. Eau Rose though launched at the same time, was not quite the same thing. But after my initial euphoria over Rosamundi subsided, I rediscovered the beauty of Eau Rose. It is that sort of steady beauty, not overly exciting, but definitely reliable to always present a lovely belle of the garden. It starts out with on a bright note with some lychee and black currant to pave the way. Those soon give way to a heart of damask roses, caressed by cedar and honey, warmed by musk. This is a pink rose scent, freshly plucked from the queen’s gardens, and it is a lovely classic. 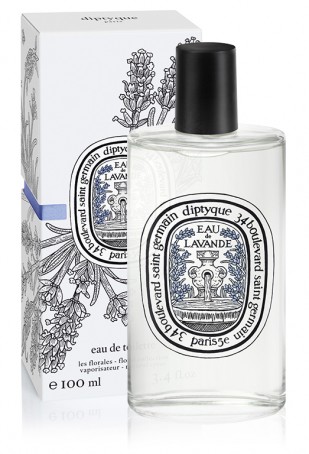 Eau de Lavande is perhaps the one that left me most perplexed. There is an herbal quality to this that is not commonly found in cheaper impersonations of lavender, nor is it the soothing sleep-inducing scent of crushed dried lavender flowers. There is an earthiness, and distinctive spice of coriander seed, basil, cinnamon and nutmeg. These all swirl together to present a distinctive, warm spicy scent that is quite unfloral in my mind. On me, it does not work at all. But on a man, it is quite a different story. 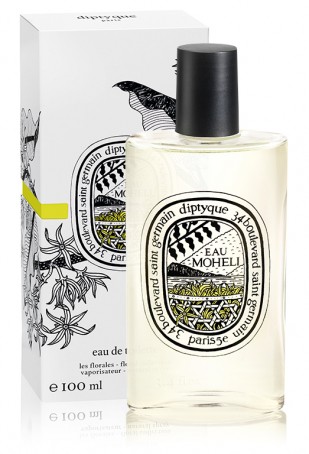 The only member of the Les Florales that is not named after a flower, Eau Mohéli is named after one of three Comores islands in the Indian Ocean off Africa, where most of the ylang ylang used in perfumery is grown and harvested. It is a most unfloral fragrance, but is instead warm, woody, spicy and slightly green. There is nothing overtly exotic about this scent, but a very chic and modern take on the tropics. The flower of all flowers ylang ylang is certainly there, but it is balanced with patchouli and vetiver to give it a woody sense. This is my favorite of the 4 Les Florales.

All 4 Diptyque Les Florales are presented as Eau de Toilette, which lasts approximately 4-5 hours on me. They are also available as sleek 20ml roll-ons, convenient for touch-ups on the go.  The bottles are somewhat underwhelming, quite pedestrian if you ask me, but it is made up for with beautiful artwork on the front and on the carton packaging.  They are also priced a little more affordably than the Eaux de Parfum and Eaux de Toilette collections.