Dior launched its Diorskin Star Foundation about 2 months back and it has quickly become one of the hottest new foundations in the market since then.

“Inspired by the professional illuminating techniques and expertise of its makeup artists, Dior invents Diorskin Star, its 1st brightening foundation: a weightless fluid capable of recreating the spectacular and perfecting light of Dior’s studios.”

Diorskin Star is powered by a new generation of hollow silica beads to capture and diffuse light, thereby giving a bright, luminous finish that is not shiny. At the same time, Dior uses color-filtering pigments to neutralize any imbalances to give the illusion of flawless skin. Dior also claims to have included skincare ingredients that reduce the appearance of pigmentation and eliminate redness with continued use. 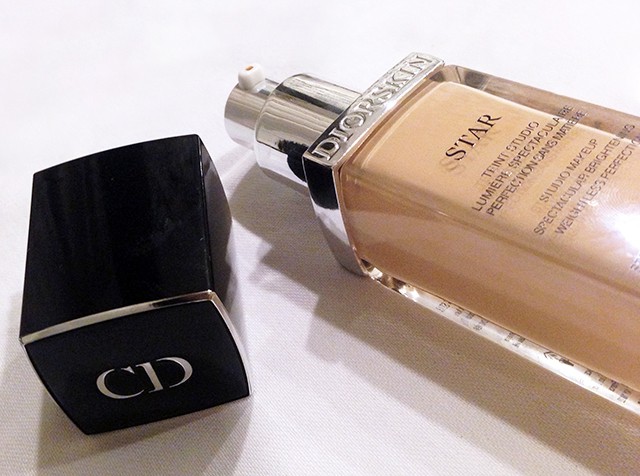 Diorskin Star is a relatively lightweight foundation which gives medium buildable coverage. Not as lightweight in texture as either Giorgio Armani Maestro Foundation or Chanel Perfection Lumiere Velvet, but pretty much on par with the everything else that I’ve tried. It is generally good for eliminating shine whilst providing a brightening, lit-up finish. And at its best, it gives a very beautiful glowy porcelain complexion!

However, Diorskin Star is not an easy foundation to wear. It is most certainly not for every skin type and condition. When I first tried it on, fresh from an overseas trip, I had some dehydrated flaky patches on my cheeks. Diorskin Star was very unforgiving on my patches, and clung to every pore and flake. With consecutive use, I actually noticed my skin getting even more dehydrated, and it was only after I put it away for awhile that my skin recovered.  Also, it does not work with every primer that I own… some primers caused the foundation to pill and slide as the day progressed. 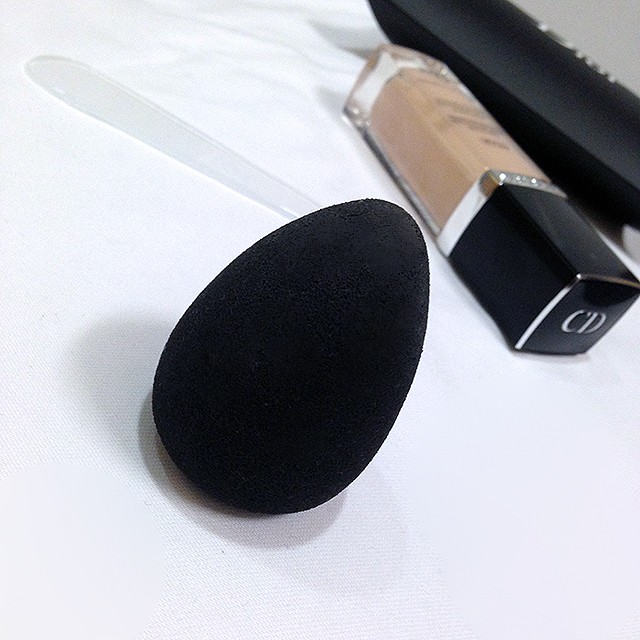 Together with the launch of the Diorskin Star, Dior has also released their own Backstage Blender. This is an egg-shaped sponge that looks very similar to the Beauty Blender, though slightly cheaper. Personally, I found it to be softer and more porous than the Beauty Blender, and definitely more user-friendly than Shu Uemura’s Lightbulb sponge (reviewed here).  I have experimented with various foundation brushes that I owned – from a flat paddle-liked foundation brush to a big fluffy one for buffing like the Rae Morris Radiance, none gave the sort of luminous finish that the Backstage Blender afforded.  I’ve also tried applying the new Tom Ford Traceless Perfecting Foundation with the Backstage Blender, and it worked brilliantly.  It is also black, which is très chic!  And surprisingly, it doesn’t look horribly stained after using.

Simply because both these foundations were launched at the same time, and both promise to be mattifying, I thought it would be an interesting comparison.  After trying a small sample of the TF, I was surprised that Diorskin Star actually looks much better on me [sadly, not everything Tom Ford is golden].  Diorskin Star leaves me looking brighter, so much so that a blogger friend recently asked if I did something to my skin (answer to that is no), and then told me categorically that I should always wear Diorskin Star from now on!  It is also more lightweight and comfortable to wear, and does not oxidize nor crease throughout the day. On the flip side, Diorskin Star is just a tad sheerer than Tom Ford Traceless Perfecting Foundation, but easier to blend.

One last point, there are currently 14 shades of Diorskin Star Foundation, so there should theoretically be a good match for most people.  Unfortunately, I seem to have fallen in between shades, with shade #10 being far too light, and shade #20 too dark.  On a brighter note, this foundation does not oxidize much on me, both with or without primer.  It lasts for about 5 hours before shine starts to creep up on my t-zone.  However, with just a quick blot, it manages to remain relatively fresh looking at the end of the day!  The big caveat of course, is that this only works on those days when my skin is relatively healthy.  Be sure to moisturize well, because Diorskin Star is not forgiving in the slightest!

10 responses to “Shine like a Star with Diorskin Star Foundation”