One of the hottest nail polish shade for Summer 2014 is bright orange.  Wear it alone with minimal makeup and look cool chic picking up that pina colada, or pair it with one of those blue eyeshadows that are being touted by almost every makeup brand.  As the sun is out, a cheery pop of orange on the tips keep things bright and happy.

I was waiting in anticipation for Chanel’s Mirabella to launch, when I came across the Dior Printemps-Ete 2014 Backstage Box (first introduced here).  And the very thing that caught my eye first was this gorgeous tangerine Dior Vernis! 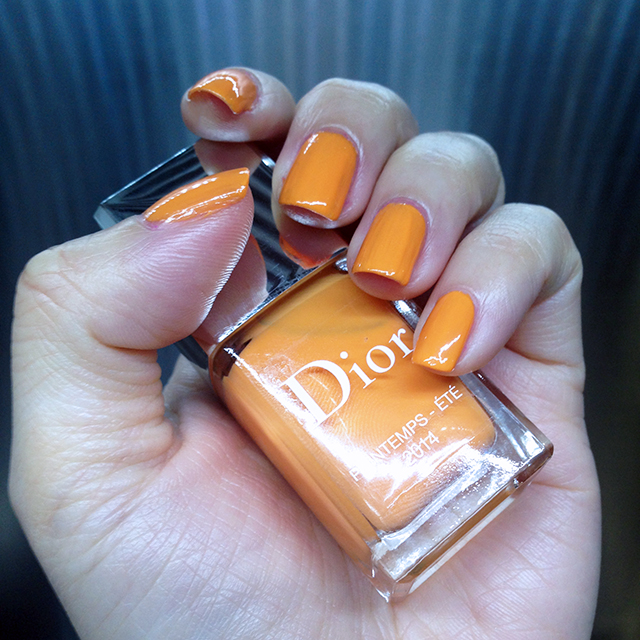 I’ve always had a fondness for Dior and YSL nail polishes, preferring them over Chanel’s as I found the brush to be easier to use and the formula to last longer.  Unfortunately, this Dior Printemps-Ete 2014 Backstage Vernis, does not seem to be of the very latest Dior Vernis Couture Effet Gel formula (see here).  And if anything, this may be one of the weakest Dior Vernis formula that I’ve encountered yet.  It tended to streak, and even with 3 coats (as shown above), I can still see some streaking.  Also, it does not go on shiny, but dries down to a matte finish.  Regardless, it is a lovely creamy orange, one that I feel is rather unique.

It comes with Dior’s wide bristled brush which is much easier to handle than Chanel’s.  But in terms of lasting power, again, this seems to be the weakest amongst the Dior family, and chipped badly after just a day on me.

It is a real shame, as it goes so well with my blingy arm-candies!  As it is only available exclusively as part of the Dior Printemps-Ete 2014 Backstage Box, it may not be a big loss to Dior aficionados in general.  But if you are considering getting the Box, I hope this post has been of use to you!