I was rather excited when I saw that Dior was releasing 3 sets of nail polishes & nail stickers for Summer 2014, as this is the first high-end brand to bring us nail stickers.  Together with last Fall’s Mystic Magnetics, Dior has a special place in my heart as the most adventurous and progressive with its nail formula.  The Manucure Transat Nail Polish & Couture Stickers Duo is available in 3 shades – nude beige, blue and red.  Today, we shall take a look at the nude beige offering – Yacht (210). 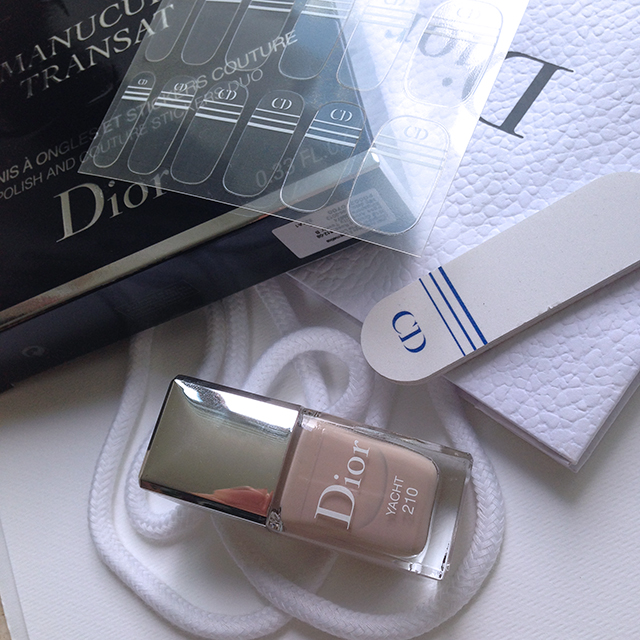 Each of the Dior Manucure sets come with a mini nail file which is white in color with 3 nautical stripes and the CD logo printed in blue.  This is intended to be used to file off the edges of the accompanying sheet of 12 clear nail stickers bearing the same design.  When I first saw the press images, I had thought the stickers were in the same color as the nail polish, and were thus different across the sets.  However, they are actually clear and similar across all 3 sets, which meant that you have to apply them on top of a coat of nail polish instead of using them in dependently (which is really tricky, requiring the nail polish to be completely dry before the sticker is applied).

Yacht itself is a cool cream nude which has been described as griege (grey-beige).  It applied incredibly well for such a pale shade, and was nicely opaque and streak-free with 2 coats. 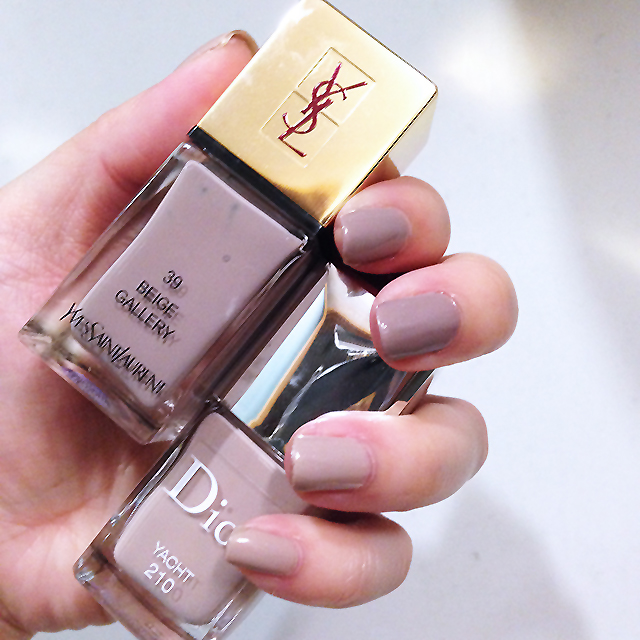 Admittedly I don’t have many nudes in my stash, but it reminded me strongly of YSL’s Beige Gallerie from Fall 2013, and so I decided to swatch them side by side.  Yacht is lighter and leans more towards grey whereas Beige Gallerie has tinges of red in it.

Dior Manucure Transat Yacht (210) wore well for 3 days before starting to show signs of wear along the edges, which is about the longest I can ever get out of nail polishes.

These Dior Manucure Transat Nail Polish & Couture Stickers Duos are limited edition and retail for USD30 a set.  Will you be picking any of them up?

Sail Away into the Coral Sunset with…

My 2 fav things: Chanel x The…