Happy Friday!  I’m rounding up my review of some rose-themed perfumes this month, and would like to introduce my latest love – Chanel Coco Mademoiselle. 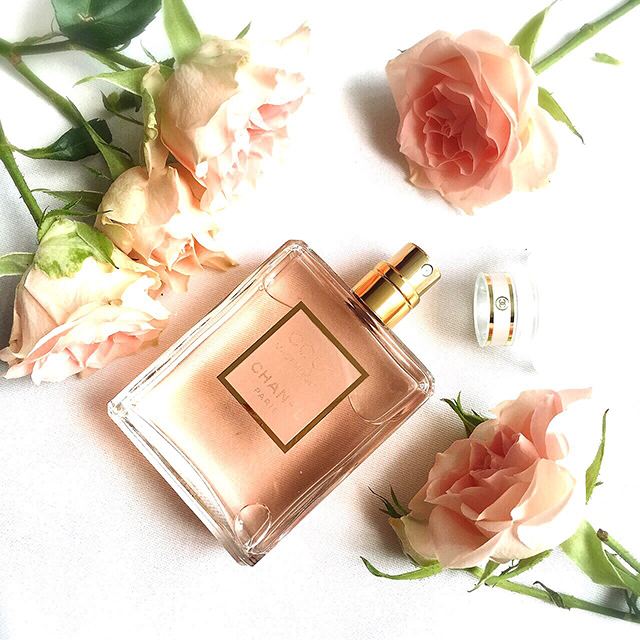 Chanel Coco Mademoiselle Eau de Parfum was first introduced in the Spring of 2001, and is one of the top selling women’s fragrance in the world.  It was created by Jacques Polge, and was envisaged to reflect the younger, more vivacious phase of Gabrielle “Coco” Chanel’s life.   In comparison with Coco Noir [reviewed here], Coco Mademoiselle is lighter, fruitier and in a way, headier.  Yet, in contrast to the way most other commercial brands would have taken a “lighter” version of a classic to be a more watered-down but essentially the same; Coco Mademoiselle is still bold and poignant, and holds her own.  As fans of Chanel knows, she was always the lady, and ever so bold and dynamic.  This little film perfectly summarized the spirit of Coco that the fragrance was designed to represent.

Coco Mademoiselle starts with a tart burst of bergamot and orange which lingers for a good long time before settling down into the background, allowing a heart of jasmine and “morning rose petals” to emerge.  This is a rather sweet and aromatic perfume, but it avoids that commercial stereotype of rose by muting it with a base of patchouli, vetiver, vanilla, and white musk.  It is next to impossible to guess the final scent by reading the notes, but one really needs to let Coco Mademoiselle sit on your skin for a bit to experience it.  I spent quite a bit of time recently with one of Chanel’s fragrance specialist, sitting down quietly and just immersing myself in the 3 Cocos, and I found that Coco Mademoiselle, despite it’s clear pinkish bottled form, is no slip of a waif.  It retains quite a bit of the original character of the 1984 Coco, but it is made more modern and relevant to women in 2015.

This is, a very different style of rose-themed perfume from those that I’ve introduced this month.  There is a certain perfume-y-ness about the Coco perfumes that most cult fragrance houses seem to be avoiding, preferring instead to let the rose play a more prominent role throughout.  But once in a while, it is refreshing to back to revisit an old friend.  When I first encountered Coco Mademoiselle sometime back, I did not take to its heady opening.  Fast forward to now, I suddenly found a different way of wearing Coco Mademoiselle that has me wanting more each day,

By spraying this just ever so lightly over Coco Noir body cream on the insides of my elbows and wrists, and then far down on my skirt, I was able to avoid the initial burst of jammy fruits altogether.  The Coco Noir body cream mellows it substantially with its Tonka Bean and geranium roes leaf.  Sometimes for the heck of it, I also spray on a bit of Coco Noir over Mademoiselle, to make it rounder and warmer.  I do feel you need both of them to appreciate the other more, and they’re both relevant for different phases of my life.

Chanel Coco Mademoiselle projects much better than Coco Noir upon initial application, but then tones down after 15 minutes to remain close to the skin.  Thereafter it slowly fades away within 3-4 hours.

Is there a Coco in your life?