It seems like everybody’s zooming in on the Les Beiges powders, and understandably so, because every summer Chanel has been giving us really pretty face powders with a hint of all over glow.  Whilst the Les Beiges powders have traditionally been exceptionally soft and smooth, and I have lots of friends who are big fans; I am quite happy to see something completely different this year.  For Summer 2016, the Chanel Dans La Lumiere de L’Ete Collection has expanded the Les Beiges family to include 2 Healthy Glow Duos which are a contour/blush and blusher/highlighter respectively! 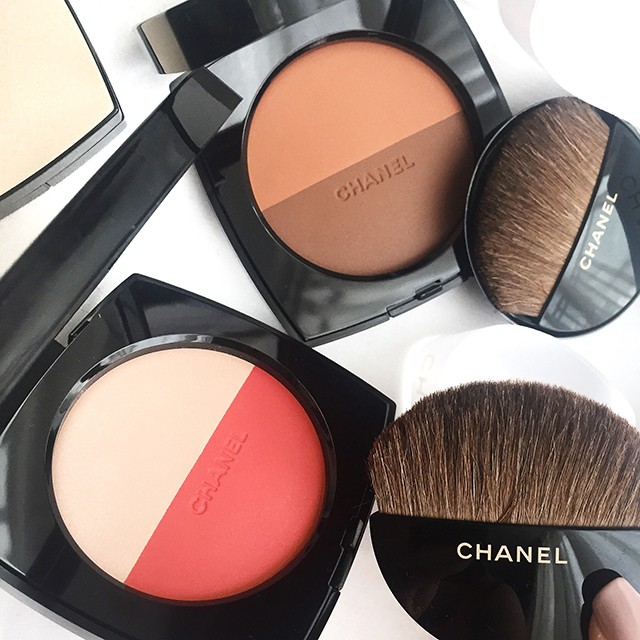 The Chanel Les Beiges collection is all about that healthy glow emanating from within, a reflection of well being.  I loved the recently launched Les Beiges Foundation [reviewed here], and the original Healthy Glow Sheer Powder [reviewed here] when it was first released.  Over the last 3 summers, Chanel has released several limited edition variants of the Healthy Glow Sheer Powder, all prettily designed and intended to bring about that sun-kissed healthy glow to the skin.  For this Summer 2016, Chanel has taken a break from tradition, and given us 2 different face and cheek Les Beiges Healthy Glow Duos instead! 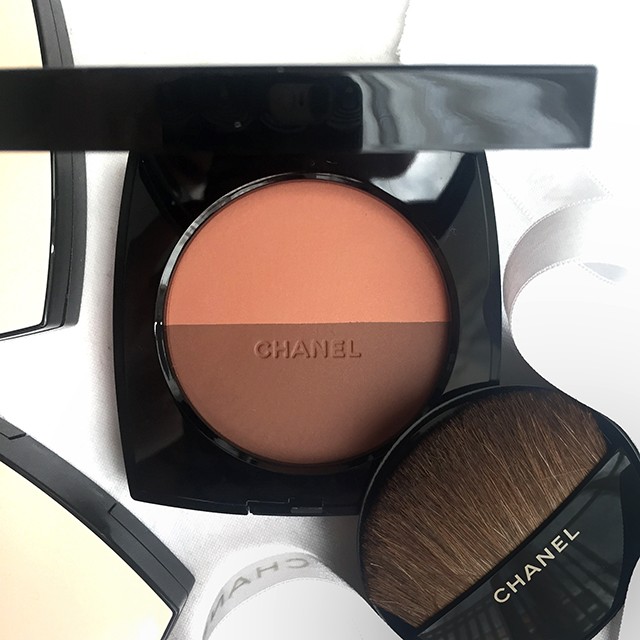 Chanel Les Beiges Healthy Glow Duo n°1 consists of a dark neutral-toned brown for contouring, and a medium warmer-toned terracotta that can be used as a blush.  Both shades have a lightly satin to matte finish, which is perfect for sculpting.  The darker shade is lighter in pigmentation than the lighter shade, and so you don’t have to worry about overdoing it and ending with a muddy patch on the face!  I’m also very happy to see that the darker contour shade does not pull orange on me, and gives a lovely sun-sculpted cheeks look! 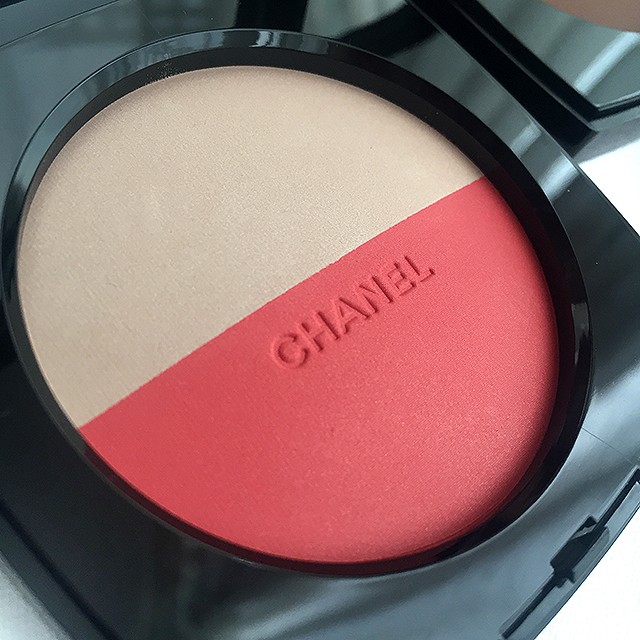 Chanel Les Beiges Healthy Glow Duo n°2 consists of a medium bright poppy pink with a satin finish as blush for the cheeks, and a pale beige with a lightly-shimmery finish as highlighter.  I was surprised by this one, as the blush pulls quite red on me, and because it is so dense in the pan it does not swatch well with a finger, but picks up amazingly with a brush!  Of course, it is not anywhere near the pigmentation of last spring’s Sunkiss Ribbon Face Palette [reviewed here], but I would still exercise caution.  The highlighter is a beautiful one for buffing on top of the blush, and in that way, tones down the redness substantially.  It is not very shimmery, but it throws off light the way naturally healthy skin would.

Here are the swatches:

Another angled shot to take a look at the finishes: 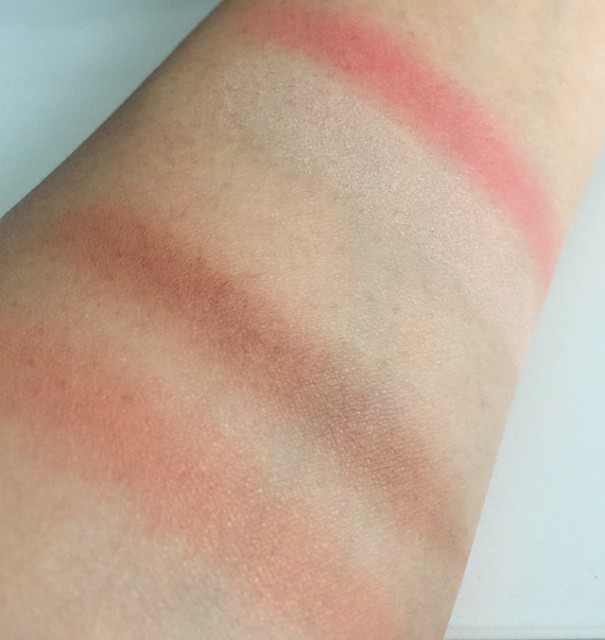 Of course, there are many ways you could choose to wear the Duos, they’re great even blended together and just applied simply on the cheeks, or the darker contour shade in Duo n°1 may be used to sculpt all over the face.  I had the opportunity to do a 1-on-1 makeup consultation with one of my favourite Chanel makeup artist recently, and would like to share some of the tips that I picked up: 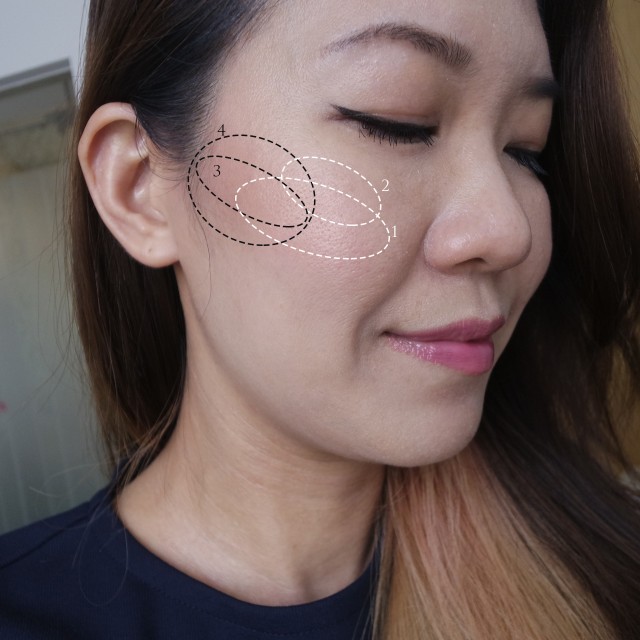 To start, apply the pink blusher shade from Duo n°2 along the cheek bone, leaving about 2 fingers distance from the corner of the nose, and never lower than the nose (as that makes the face appear droopy!).  Buff the highlighter shade just above the apples for a luminous glow.  Next, apply the darker contour shade from Duo n°1 carefully along the cheek bones, keeping to the sides of the face.  Finally, use the blush shade from Duo n°1 to blend out, starting from the corner of the ear closest to the hairline, but never go lower than the nose.

I also got to try out a couple of Chanel Levres Scintillantes, and would like to show them to you. 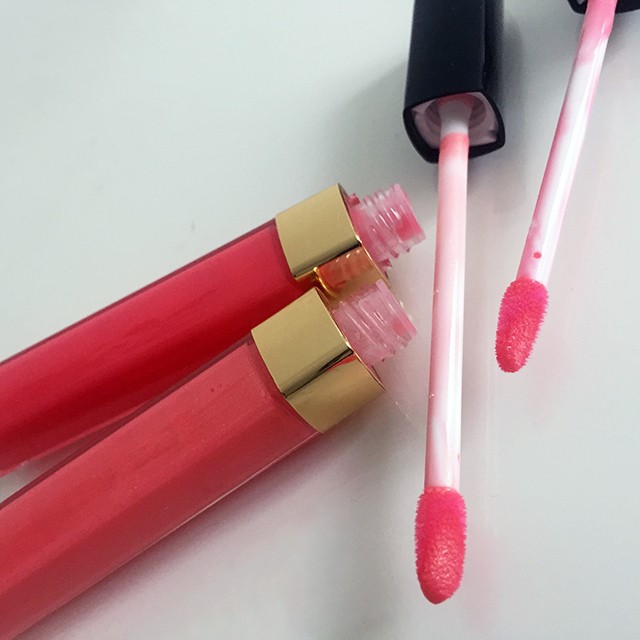 I am totally not a gloss girl, and even though I pick them up from time to time out of curiosity, I always forget to apply them.  But this Summer 2016’s Levres Scintillantes deserve a second look because there has been several changes.  The most notable is the new applicator, which is no longer the doe-footed one such as this; but is now flattened on both ends and is more paddle-shaped like the Rouge Allure Glosses [reviewed here].  The formula is also more pigmented (although it is still sheerer than the Rouge Allure Glosses) than before, and completely non-sticky on the lips.  I was very much “compelled” by Cecilia into giving 2 of them a good try. 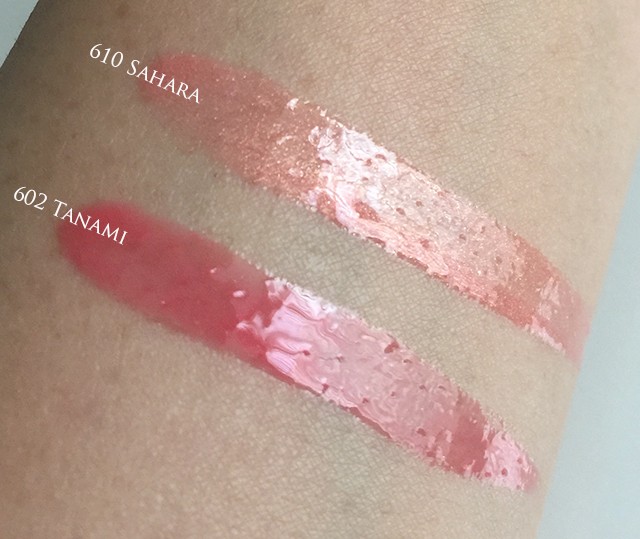 Chanel Levres Scintillantes 602 Tanami is a bright watermelon pink with a high gloss finish.  It is a really cheery shade that can be worn anytime either on its own for a casual look or layered over lip liner for a more put-together look.

Chanel Levres Scintillantes 610 Sahara is a light warm-toned peach with a sheer base and a generous sprinkling of golden shimmers.  This is such an easy gloss to wear, it can be worn on its own or used on top of any other lipstick or liner.  Truly versatile!

Both shades complement my Asian skin tone very well, and in Cecilia’s own words – “every girl should own these 2 shades!”.

Here is a full makeup look featuring both Les Beiges Healthy Glow Duos on my cheeks, and Levres Scintillantes 210 Sahara (layered with a liner) on my lips.  Eyes are done with Empreinte du Desert which was reviewed yesterday in this post. 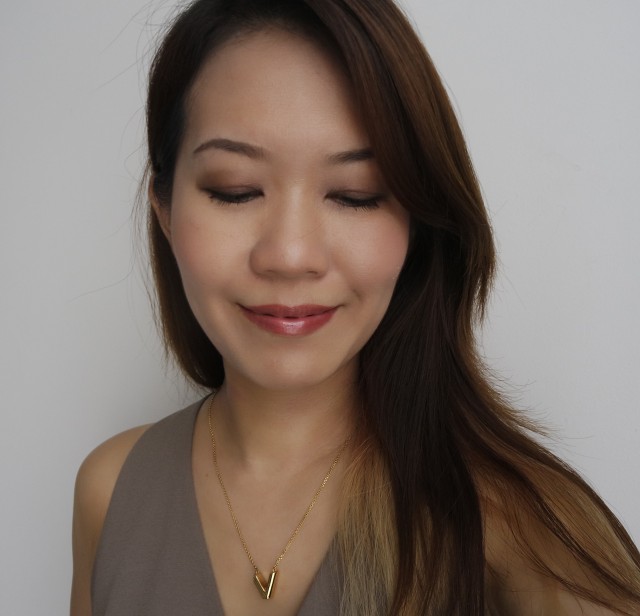 I hope you have enjoyed my picks from Chanel Dans La Lumiere de L’Ete Summer 2016 Collection so far!  I still have a few nail polishes to show you, so pop back in again tomorrow!