It is a bold move, I think, to design an entire makeup collection around a single nail polish.  And the holiday collection no less, one of the most significant collections in the beautyjunkie’s social calendar.  But it was an excellent collection, all in all, some misses perhaps, but mostly hits for me.  So it was only fitting to close the loop by taking a closer look at the infamous Chanel Le Vernis Rouge Noir and its irresistible companion, Le Top Coat Lame Rouge Noir.

Chanel Le Vernis Rouge Noir (18) first made its debut during the Autumn/Winter 1995 runway show for Chanel’s Ready-to-Wear collection, and was first called Vamp in the US.  It was a homage to the intense garnet shade that Mademoiselle favoured, like “the heart of a black cherry”.  Since then, Rouge Noir has gained cult status, and is deemed as one of the House icons. 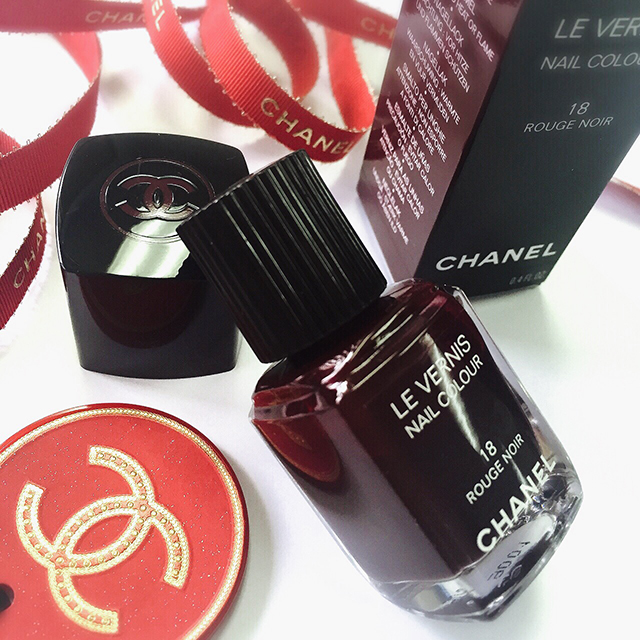 For the Holiday 2015 relaunch and 20th anniversary celebration, Rouge Noir has been dressed in a special limited edition bottle bearing a cap with the usual interlocking-C logo painted in the celebrated color.  The outer carton packaging also bears the shade on the 2 sides.  Minor touches but it gives the collector in me a reason to pick it up now rather than later.

Rouge Noir is a classic shade of deep wine red, more red than oxblood, but deep enough it is so much more than red.  Under bright lights it almost pulls burgundy.  The formula is Chanel at its best, easy to apply, opaque in 2 thin coats, and wears for 4-5 days before showing signs of wear. 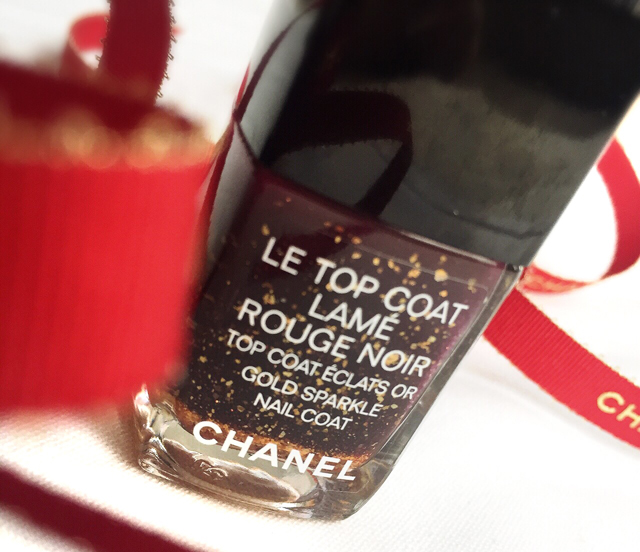 To further dress up Rouge Noir for the festivities, Chanel has released a very special limited edition Le Top Coat Lame Rouge Noir.  This is a milestone in my mind, because Chanel seldom releases glitter top coats, in fact I don’t remember seeing one in recent years.  And unlike its other fashion branded competitors, when Chanel dabbles in “trends”, it gets it right.  Le Top Coat Lame Rouge Noir is essentially a gold flake top coat tinted with the Rouge Noir shade but gives the barest whisper of color on the nail.  When worn in combination with Le Vernis Rouge Noir, it brings out the red.  If worn with a lighter shade, it will have the tendency to tint things pink.

And here is a look at how it all looks with Le Top Coat Lame Rouge Noir layered over Le Vernis Rouge Noir: 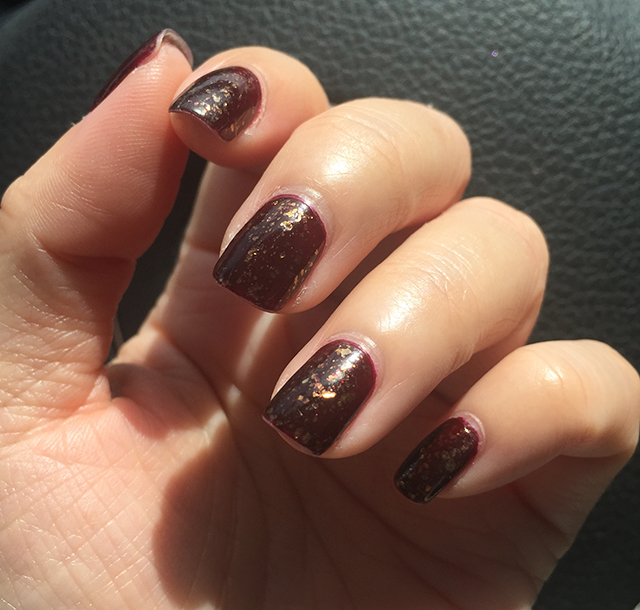 The gold flakes vary in shape and size, and even though some of them are slightly chunkier, they lie flat on the nail and does not need any prodding around or careful laying down with a tool.  The brush is able to pick up a decent amount of gold flakes on its own, although you may go over with a 2nd coat to deposit more as I’ve done for the nail swatch above.  The flakes do tend to settle down at the bottom of the bottle when left alone for awhile though, so remember to give it a good shake before using.

Overall, I’m really loving the combination of Chanel Le Vernis Rouge Noir and Le Top Coat Lame Rouge Noir!  On its own, Rouge Noir is so effortlessly elegant and interesting it can be worn anytime.  The Le Top Coat Lame takes things up a notch and is fabulous for the year-end festivities.  There is 1 other Rose Fusion [reviewed here] for a bit of variety in the collection.  Have you checked them out yet?