Welcome to a fresh week of beauty! I’ve been playing with a tonne of new Fall makeup that I can’t wait to show you! But I’ve been obsessed with getting my hair dyed multi-hued like my friend Sydney, and ended up spending the entire afternoon at the salon. To fulfill today’s #Mani-Monday, I have the last of Chanel’s Fall 2015 Le Vernis to show you – Chataigne! 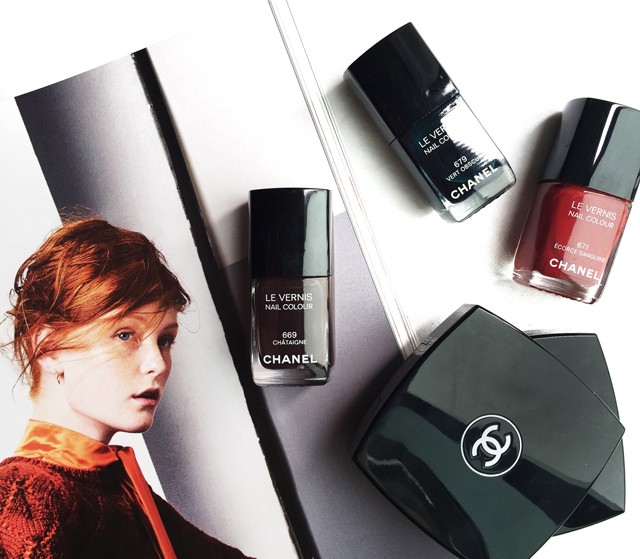 Chanel Le Vernis Chataigne (669) was the only 1 of the 3 fall nail polishes  from Chanel’s Les Automnales Collection that least appealed to me initially, and I hadn’t planned on picking it up. It reminded me of oxblood, a shade that enjoyed its height of popularity about 2 years back. Today, that color feels tired and over-done to me. However, after acquiring 2, it felt churlish to leave Chataigne out… especially when the other collections were not feeling exciting to me.

On my nails, Chataigne is more dark chocolate than oxblood. With a single coat, it almost pulled cool-toned with some slate-grey influence in it.  But I needed 2 coats to cover my nails completely.  I found Chataigne to be somewhat thicker and gloopier, and therefore harder to spread evenly.  I’m sure I can fix it with a drop of Seche Vite Restore, but something to keep in mind if you are planning on picking this up.  Anyway, with 2 coats the red became more apparent in Chataigne.

Upon applying to my nails, I decided that I like Chataigne more than I had initially thought I would. Unlike most other oxblood polishes I own, Chataigne does not pull too brown nor too red. It is rather dark, so much that I think if I applied a 3rd coat it would turn black. And it is this quality that appealed to me as it made my hands appear fairer.  There is also the signature Chanel hidden micro-shimmers that is impossible to photograph but makes the difference.

The only thing I have to complain about Chataigne is that it does not last on my nails at all. I applied it in the morning and by evening it was already chipping off at the tips. Granted I had to do some chores at home, so you may have better luck with it than me.  In case Chataigne doesn’t appeal, you should also check out Ecorce Sanguine (reviewed here) and Vert Obscur (reviewed here).