I’ve been talking quite a bit about eye care recently because my top pet peeve has been the lines around my eyes that started developing before I even turned 20.  The reality was I was a terrible geek during my college days, and endless nights of dungeon crawling combined with an early childhood bad habit of rubbing my eyes created some lines around the inner corner of my eyes close to my nose bridge long before they are due.  Over the years I have learnt to accept the fact that they are a part of me, and no eye product will ever reverse those lines.  However, despite my best efforts, I recently discovered new lines developing under my eyes, and a perpetual eye bag that shows up under my left eye whenever I smile.  That was when I decided to take another preventive step to delay further damage.

One of the advantages of being of Asian descent is that we don’t develop as deep furrows as our Caucasian sisters.  However, all that stress and natural loss of elasticity has to show up somewhere, and so we tend to end up with more lines albeit less deep.  Whichever the case may be, I’m not ready to deal with permanent wrinkle damage in my late 30s, and expect to age gracefully for many more decades to come.  A couple of years ago, I tried out Thermage [reviewed here] which helped plump and lift my skin.  The problem with Thermage though, is it comes with a measured amount of pain, and it can be fairly expensive procedure that needed to be maintained every 1-2 years.  For the delicate eye area, I decided to try something out… something much more pain-free and affordable.

To be honest, I’ve always been secretly afraid of Botox.  The idea of intentionally injecting a potentially deadly bacteria into my body defied all notion of logic.  For years, I had resisted the idea of Botox, determined to age naturally.  However, upon chatting further with Dr Gerard Ee at The Clifford Clinic, I found out that in the hands of an experienced doctor, it is relatively safe.  Botox has been FDA approved since 2002, and was originally used to treat serious medical conditions such as cerebral palsy and various involuntary muscular spasms.  It works by blocking the nervous signals that causes muscles to contract, thus relaxing those muscles and preventing fine lines and wrinkles from forming.  The Botox used in aesthetics procedures are not lethal doses, and it does not work by killing the muscles (as I had initially thought!). 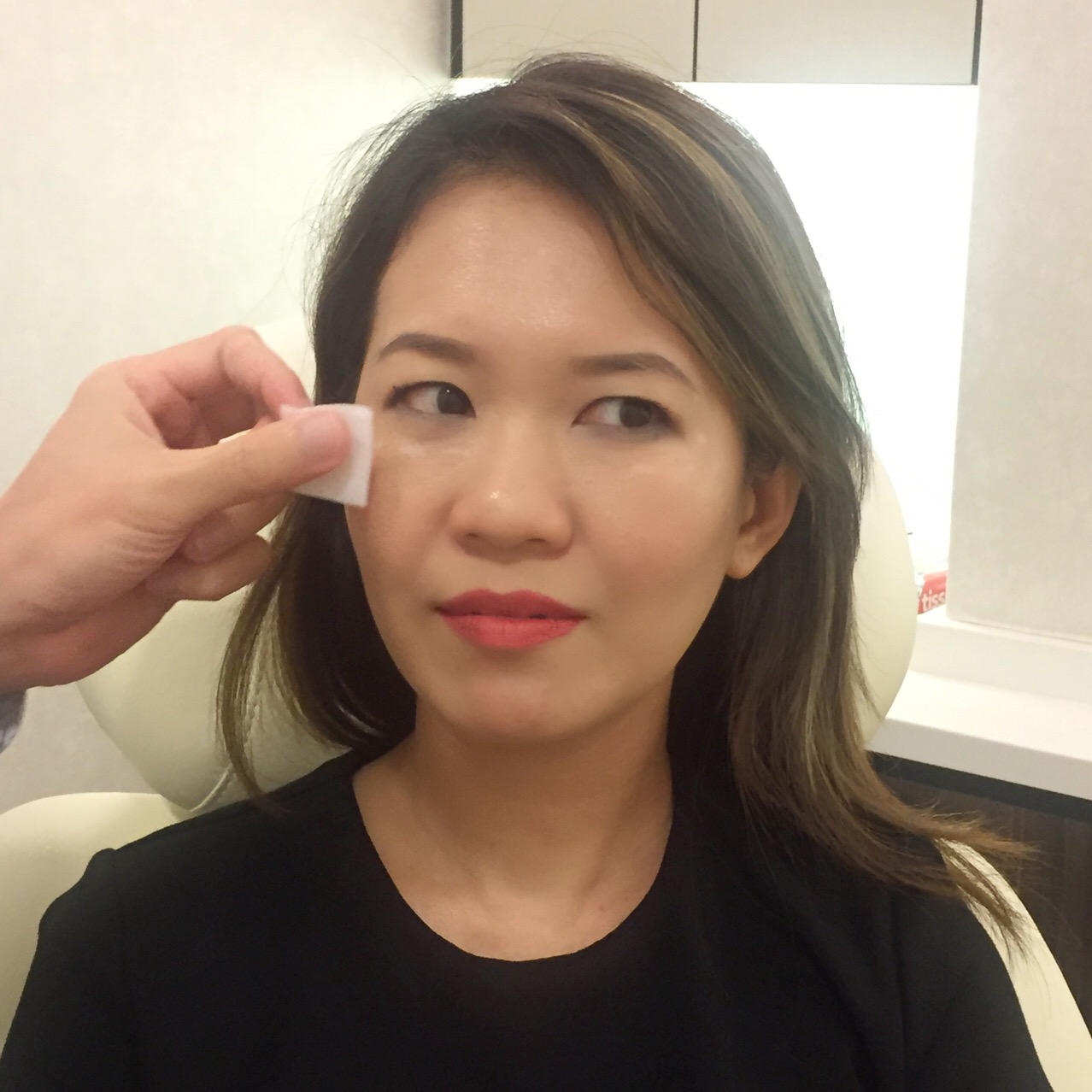 Upon a close examination of my natural expressions and the structure of my eye area, Dr Ee decided on the right target spots, namely in the middle under my eyes, outer corner, just under the outer tip of my brows, and above the arch.  A tiny needle administered the botox to those spots, and after a simple numbing cream, all I could feel was the lightest pin pricks that was a little uncomfortable simply because I’m not used to it, but nothing compared to Thermage. 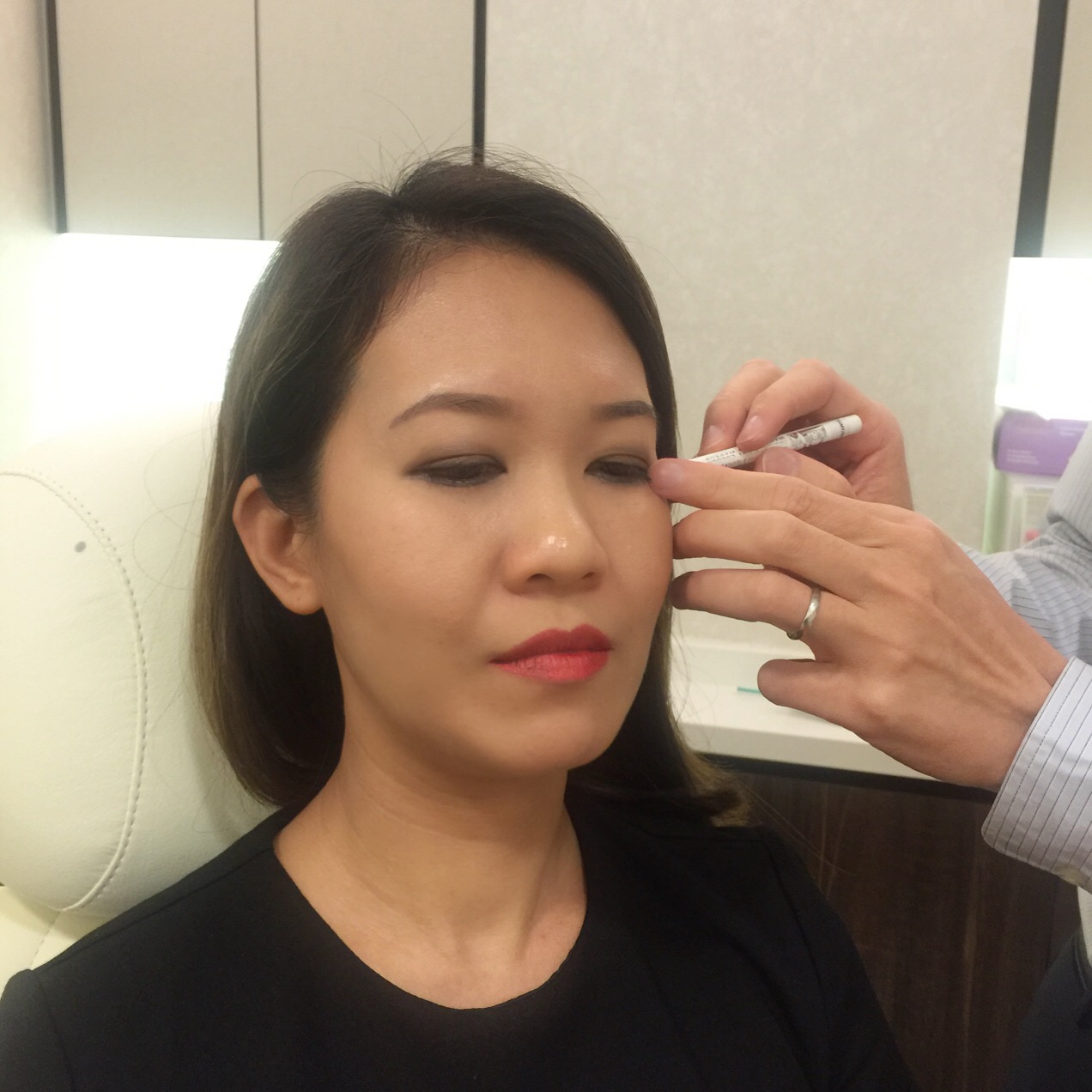 Dr Ee carefully marking out the spots for the injections

Botox includes Clostridium botulinum type A neurotoxin complex, Albumin Human, and sodium chloride.  It is essentially a refined form of C. botulinum bacteria, and refined to the extent that the risk of botulism is minimal.  The known cases of botulism have been caused by use of non-cosmetics grade botox and incorrect dosages, thus it is very important to find an experienced doctor who uses licensed products. 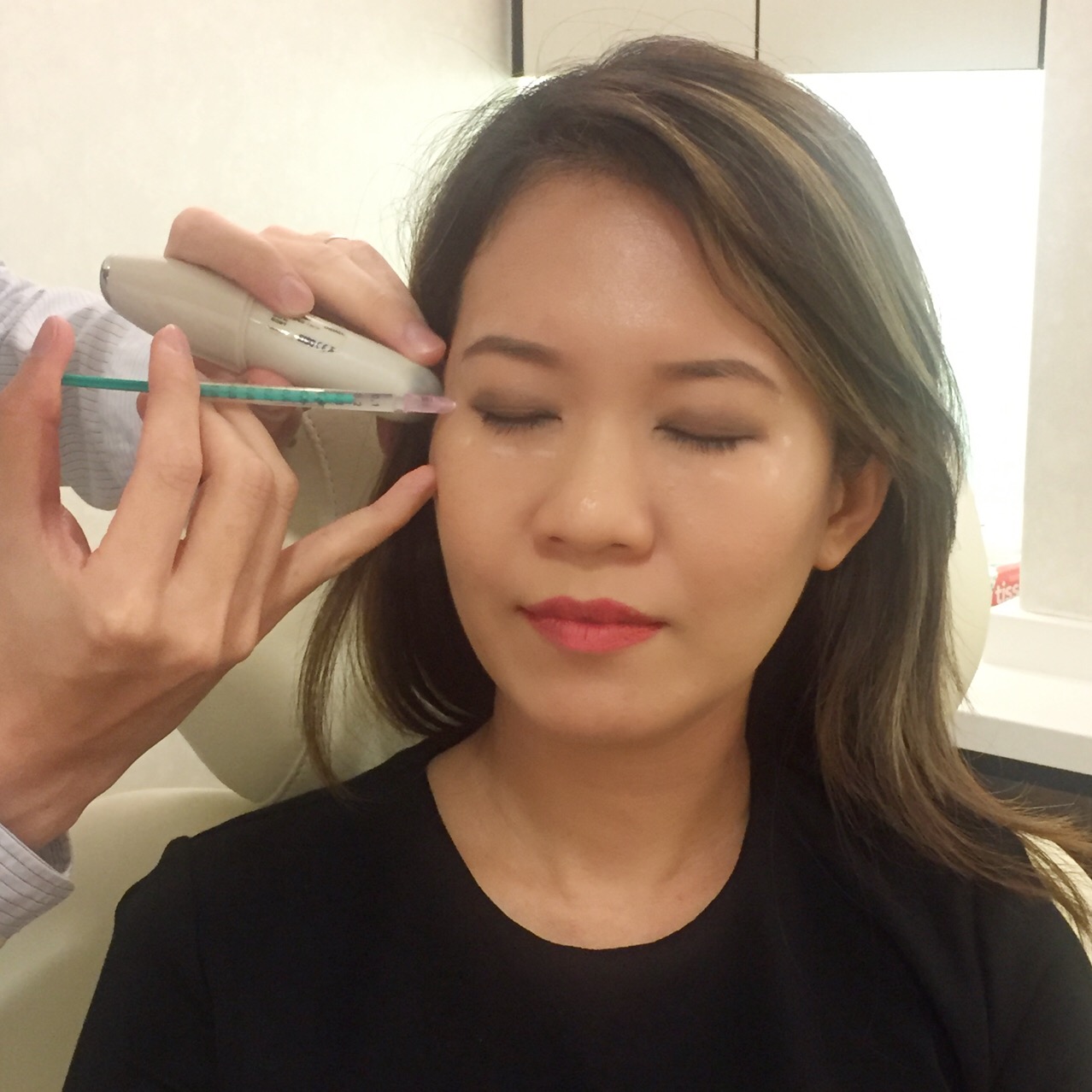 As a working professional, I love how conveniently located The Clifford Clinic is, right in the middle of the CBD, within steps from Raffles Place MRT in Singapore.  The entire session, from consultation to completion of the procedure took less than 30 minutes, and even with my first-visit registration and stopping to take some photos for this post, I was in and out of the clinic in less than an hour.  And the effects become visible within days! 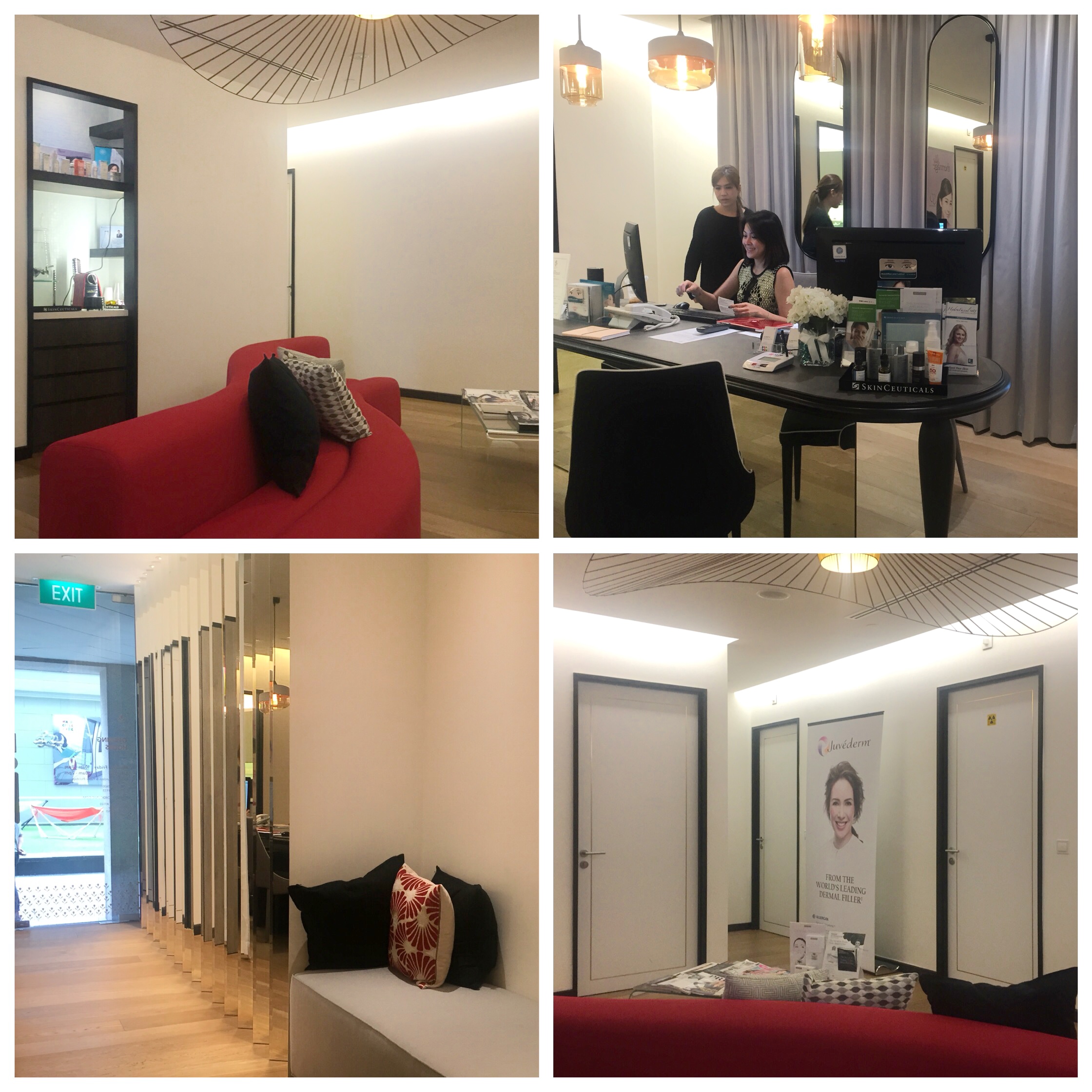 Comfortable and stylish interior of The Clifford Clinic

Unlike Thermage that takes months to become visible, Botox goes to work right away and is visible within days.  Make no mistake though, that does not mean you are unable to smile at all, nor does it mean completely expressionaless eyes.  On the contrary, in the hands of a skilled aesthetics doctor, I still look myself, just minus those dreaded lines that tell my age.  And with lack of stress, the delicate skin around my eye area is preserved, and further wrinkles are prevented from developing.

Just to show you what I mean, here is a completely natural, unedited picture taken just a few days before I had my botox injections.  Regular readers of this blog might have seen this on an earlier post, but I must admit it had taken me hours of editing to erase those lines around my eyes.  Note the deep eye bags under my eyes and the wrinkles along the sides of my eyes near the temples.  Gosh not pretty at all! 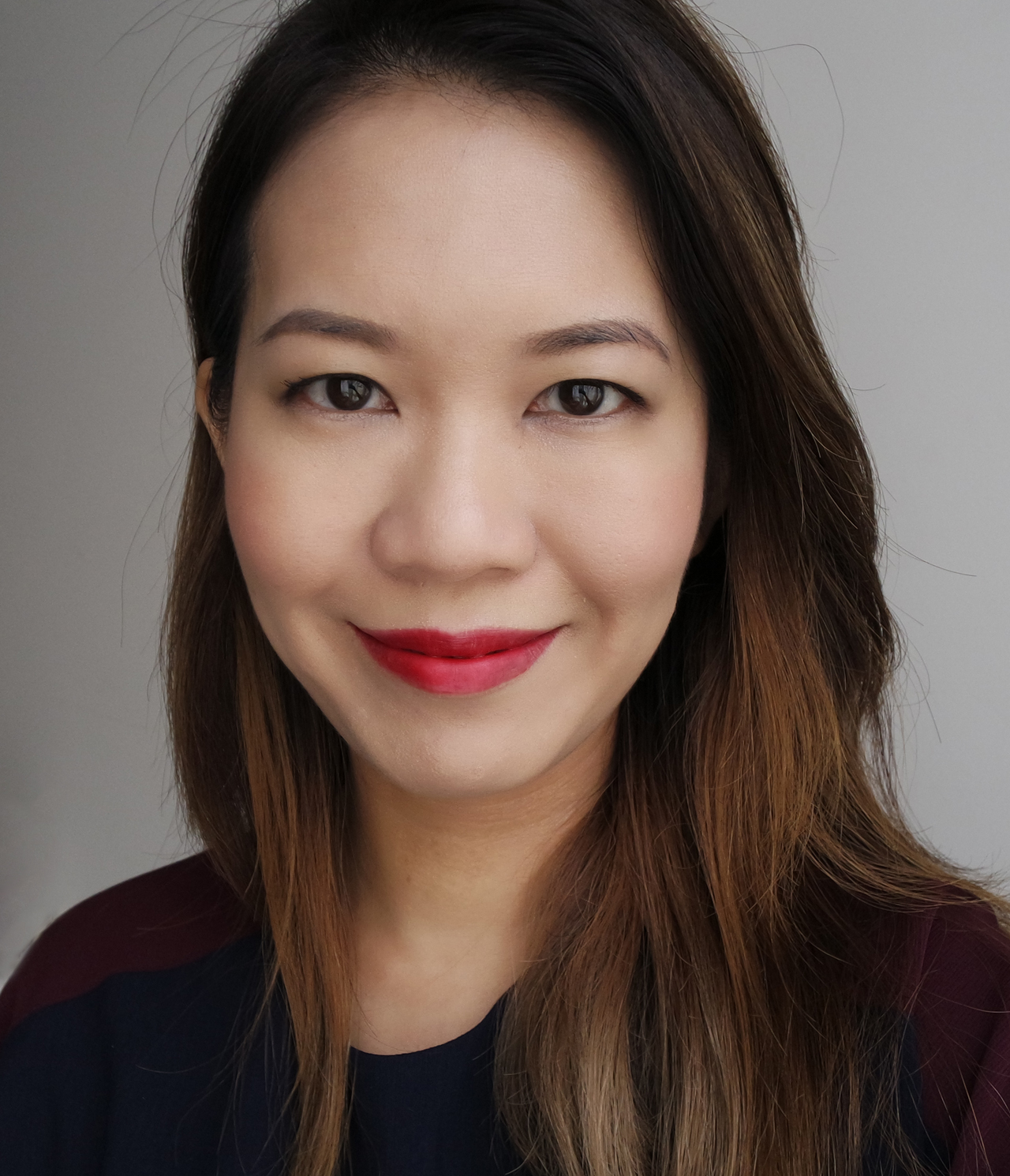 In contrast, this is a recent picture that was taken for a makeup review, and though I wasn’t smiling extensively (because I really really hate my teeth!), the lack of lines is obvious – no more eye bags and definitely no lines near the temples!  No photoshopping needed!

As with all aesthetics procedures though, nothing lasts forever.  The effects of botox lasts approximately 3-4 months, depending on lifestyle and specifically, how much those affected muscles are used.  The cost is based on the number of units of product used, and pricing is mostly consistent with minor differences across practitioners.  The key difference maker is the number of units required, which meant that the earlier the problem is arrested, the less you will need.  If you are like me, just preventing expression lines from forming permanent wrinkles, the cost should average SGD280-300.

Of course, the decision for any aesthetics procedures is an emotional one, and finding a trusted aesthetics doctor is an important step.  I like the straightforward, to-the-point style of Dr Gerard Ee at The Clifford Clinic, located at 24 Raffles Place, #01-03 Clifford Centre, Singapore 048621.  He is definitely my recommendation to anyone who is looking for a doctor who is skilled, professional and comfortable to work with.

This post featured a treatment that was kindly sponsored by The Clifford Clinic.  Regardless, all opinions expressed here are my own honest, unbiased views.  No payment was accepted for writing this post.

6 responses to “Taking One More Step to Delay Premature Wrinkles”