Bobbi Brown was the very first high-end luxury makeup I purchased when I first entered the very “grown-up” world of working adults.  I still remember vividly how I was just randomly browsing for a brow product, and a very professional and patient BA taught me to shape my brows with a brush and powder for the most natural look.  And more than 10 years later I’m still more proficient with a brush and powder than a pencil, and that Bobbi Brown angled brow brush is still a proud member of my very extensive brush family today!  Over time though, I had moved away from the brand in search of other more “exciting” colours… but lately I’ve noticed Bobbi Brown growing stronger and stronger with each season, and getting more trendy whilst still remaining true to the Bobbi Brown aesthetics.  And there is no better way of reuniting with an old friend than with their most exciting launch yet – Bobbi Brown Skin Foundation Cushion Compact, and the complementary Nude Finish Illuminating Powder! 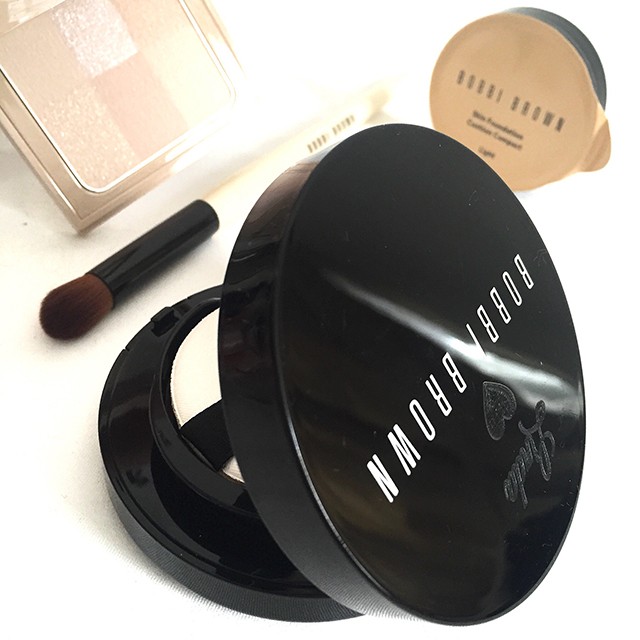 The new Bobbi Brown Skin Foundation Cushion Compact SPF50 PA+++ [S$54 (refill) / S$21 (compact)] is truly unique in the sea of cushions that have been launched lately.  Designed to resemble a coffee capsule, the cushion is kept airtight until opened, ensuring the formula is perfectly fresh! 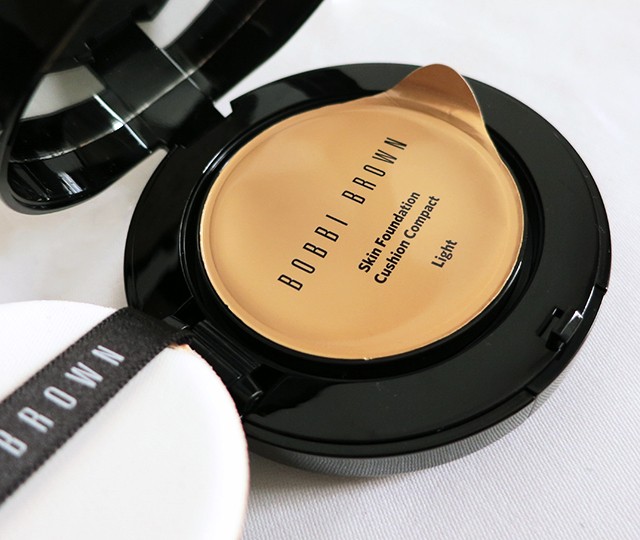 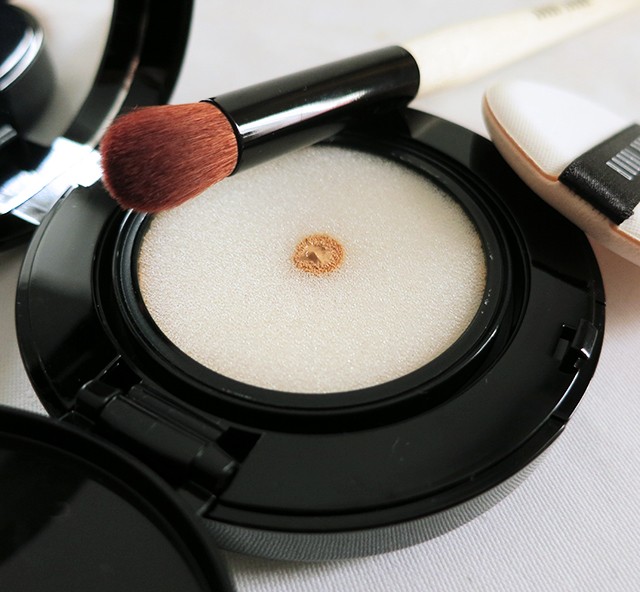 The external casing has the familiar swing lid that snaps tightly shut over the cushion when not used, and a puff lies atop the lid.  One word about the Bobbi Brown puff, this one feels plusher and bouncier than most of the other cushion puffs out in the market, and I actually don’t mind using it (I usually chuck the cushion puffs aside and use my own beauty blender or brush)!! 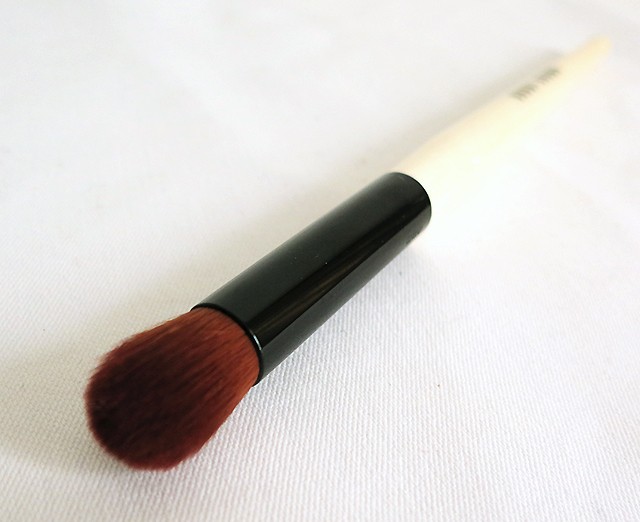 The design of the Skin Foundation Cushion Compact also allows for easy pick up using a brush if that’s what you prefer.  And to complement the launch of the cushion, Bobbi Brown has designed a Full Coverage Touch Up Brush to add coverage to small, hard-to-reach places.  The brush feels very smooth against the sensitive skin of my under eye, yet it is dense enough to work and blend efficiently.  The bristles are very fine, and I suspect it is made of pony or sable. 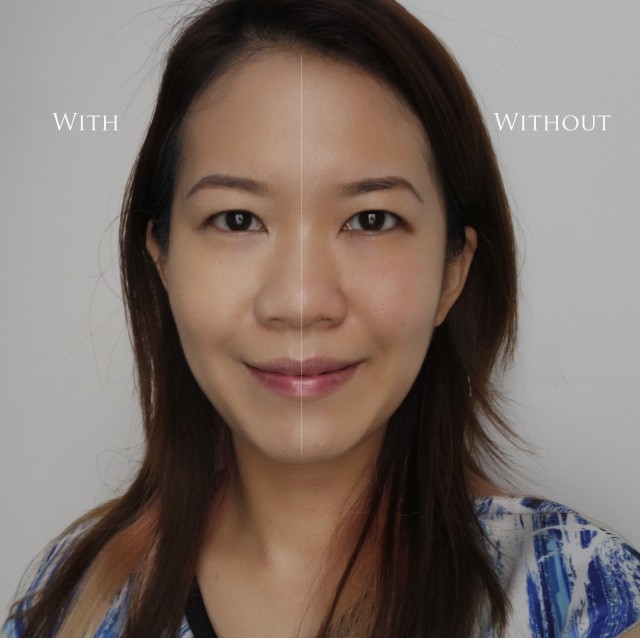 The coverage of Bobbi Brown Skin Foundation Cushion Compact is surprisingly good, medium and slightly buildable.  It effectively evens out my skin tone, eliminating the redness on my cheeks, and brightening up my dark undereye (too bad about the puffiness though!).  By dabbing on more of the liquid foundation using the Full Coverage Touch Up Brush, I was able to cut down the redness around my nose to a liveable minimal, allowing me to skip a concealer if I wish!  There is a healthy luminosity to the finish, although those with oilier skin types may like to dab on a little loose powder.

I was most amazed by the perfect color match that this Skin Foundation Cushion Compact gave me.  I am using the shade Light, and it is a spot on match in terms of lightness and natural skin tone.  It doesn’t pull grey like so many cushions I’ve tried, nor is it too yellow.  The Skin Foundation Cushion Compact is formulated with Pink Silk Tree Extract and Caffeine to prevent glycation which is the process of aging, and reduce puffiness!  High SPF50 PA+++ protects against sun damage, combined with a lightweight and moisturising feel on the skin, making this the perfect daily base. 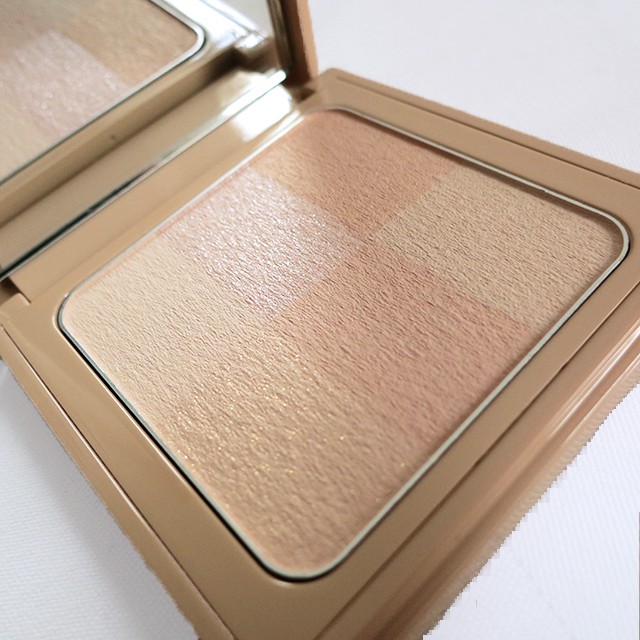 Just in case you can’t get enough of that fresh-faced glow, Bobbi Brown has released a brand new Nude Finish Illuminating Powder!  Just like the famous Shimmer Bricks, the Bobbi Brown Nude Finish Illuminating Powder contains some shimmers (much less than those bricks!) and comes in various skin tones to give a sheer wash of illuminating glow to the face. Designed to be used all over the face, but depending on the shade you pick, they could be used as highlighters or even bronzers.  These feel somewhat hard in the pan, and require a dense brush to pick up.  But once they are on, they transform into a creamy texture and blends into the skin without any trace of powderiness nor cakiness.  The Bobbi Brown Nude Finish Illuminating Powder contains Sodium Hyaluronate to prevent skin from drying out; and porous powders help to absorb excess oil throughout the day.  Mulberry, Grape and Scutellaria Extracts work in combination to brighten the complexion. 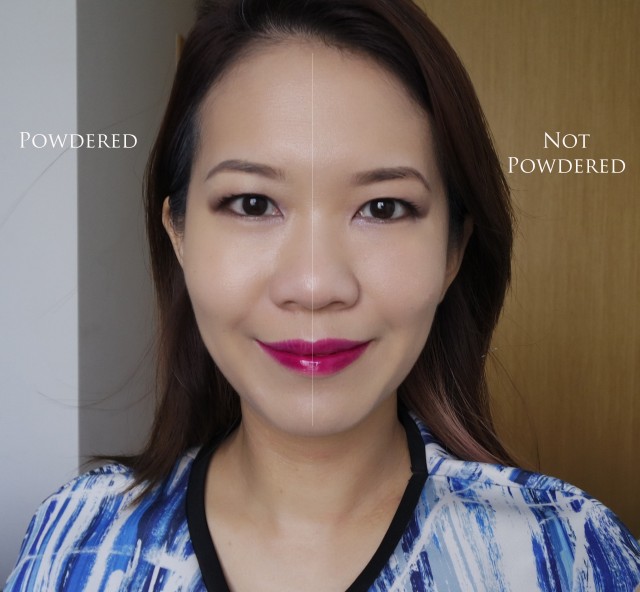 Notice the beautiful glow?!  If you clicked on the image to zoom in, you’ll not be able to see any trace of the powder at all! Used with the Skin Foundation Cushion Compact, I personally feel it is a bit too much.  It looks great at first, but gets a bit too shiny fair too quickly.  On the other hand, when dusted just on the high points of my face, Nude Finish Illuminating Powder gives a nice highlighting effect that is softer than strobing, but still very nicely visible!

Both Bobbi Brown Skin Foundation Cushion Compact SPF50 PA+++ and Nude Finish Illuminating Powder are out in Singapore now, and will gradually be available in other Asian markets.  I’m not sure if they will eventually be made available in the rest of the world, but at this point, the cushion is an Asia-exclusive it seems!  Does this intrigue you enough to want to give it a go?!  😉