Last September, Albion opened its first counter in Takashimaya Singapore and has been slowly rolling out its product lines.  Albion is one of the most established beauty brands from Japan, and prides itself on producing many firsts in its 58-year history.  The most recent product line to be introduced in Singapore is the Albion Infinesse White range, and I was delighted to be able to sample it. 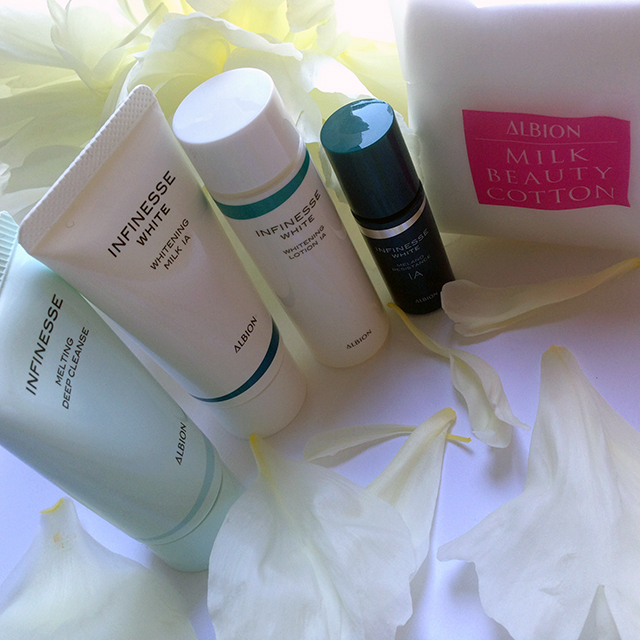 Albion’s Infinesse White skincare range promises to transform skin in both texture and tone, so that it is perfectly clear and white, as well as be visibly lifted and firm.  The products are packed with many plant extracts such as lotus, licorice and peony to curb the production of melanin and promote cell metabolism to get rid of existing melanin.  In addition, hibiscus and meadow bistort extracts boost skin’s inherent whitening function to revive clear, fair skin.  The formula also includes artichoke and algae extracts for anti-inflammatory properties and boost collagen production.

There are 8 products in the Albion Infinesse White range, and I was able to try out 4 of them for a period of time. 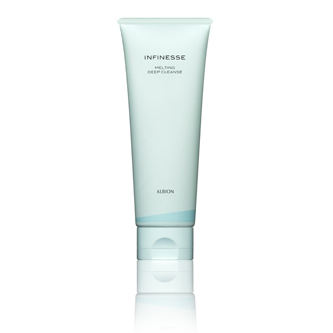 This is a lightweight gel-like balm that melts instantly when rubbed, turning into a light oil to remove makeup and impurities.  I have tried many cleansing balms before but the texture of this is simply amazing! 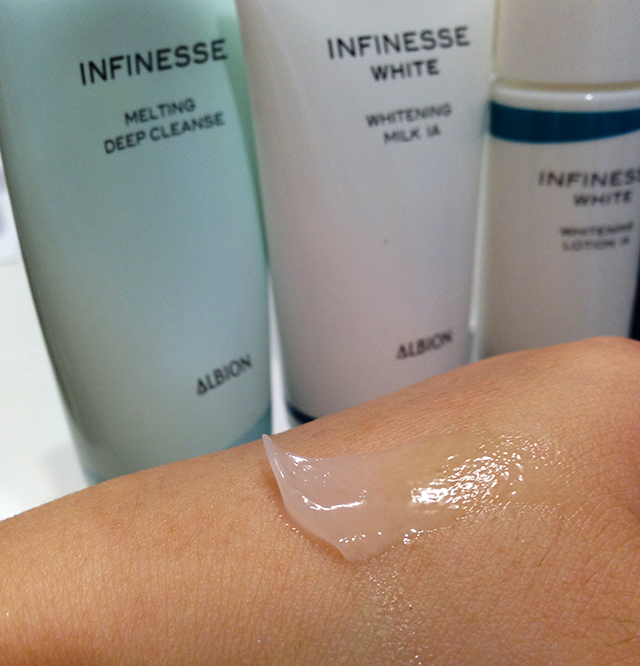 I like to dispense about a quarter-sized dollop from the tube into my palm, rub it a couple of times to quickly melt it, then spread all over my dry face in circular motion.  Immediately, the Melting Deep Cleanse dissolves my makeup, and I am able to rinse everything off completely.  It has a beautiful floral fragrance that is not overpowering, but leaves a very pleasant pampered sensation. 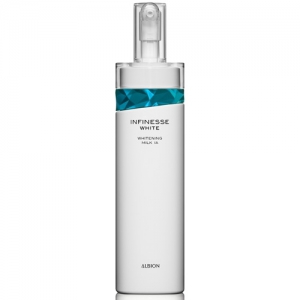 Albion’s skincare routine is slightly different from other mainstream lines in that moisturizers are designed to be used right after cleansing.  And the Whitening Milk IA does that beautifully. 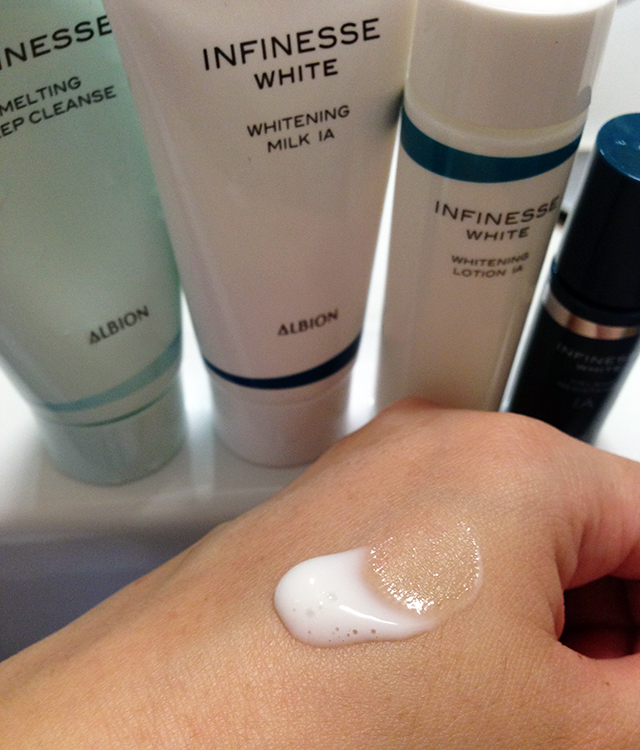 It is a light milky fluid that is quite runny in consistency, and absorbs quickly.  I would probably use about twice the amount shown above and just envelop my entire face in this lovely moisturizer.  It has the same floral musk scent as the melting deep cleanse, and feels comfortable on.

Next up is the Whitening Lotion IA, which is typical of most facial toners, with its clear watery texture.  This one smelled strongly of alcohol although when used after the Whitening Milk IA, did not sting my skin nor made it feel dry at all.  Instead, it left my skin feeling clean and bouncy.  This is the last step of the core skincare routine, and I can imagine many girls living in hot and humid climates like mine (or simply summer!) might prefer ending here.  You are left with a fresh, clean feeling face without any greasiness or stickiness that sometimes plague routines ending with moisturizers. 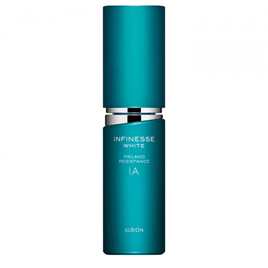 The last step of my Albion Infinesse White routine was to apply the Melano Resistance IA.  This is a slightly thicker, but still runny milk fluid that is packed with whiteness proteins to boost the skin’s inherent whitening function. 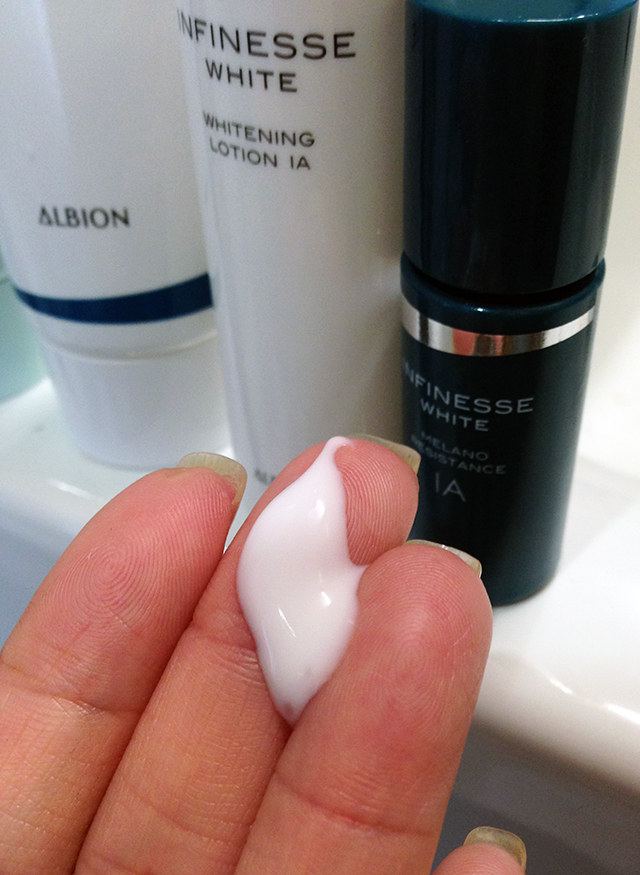 As with all serums, this is actually an optional step.  However, having used this set for the past few weeks, I found that I prefer ending with the Melano Resistance IA as I’m used to finishing off with some sort of moisturizer, and this did not leave my skin feeling oily nor sticky.  Again, it absorbs quickly, and I was able to move on to my makeup within seconds.

I have really enjoyed trying out this Albion Infinesse White range!  Every single item was designed to delight the senses – lovely textures and beautiful floral musk scent.  And even though the routine seemed somewhat jumbled from what I was used to, it seems to make sense in the context of Albion, and I had no difficulty adapting.  I have only been using this strictly for 2 weeks so I can’t really tell if my skin tone has improved.  I did take a break in between because of a bout of skin irritation which was not caused by these products.  And when I came back to using it again, I did notice firmer and generally smoother skin.

The Infinesse White range is priced from SGD63 onwards, and is available at the Albion counter at Level 1 Takashimaya, Singapore.  You may also find it on various sites online, or give me a shout if you need help tracking it down!

My sincere thanks to Luxasia for sending this set over for my evaluation.  The opinions above are purely my own.